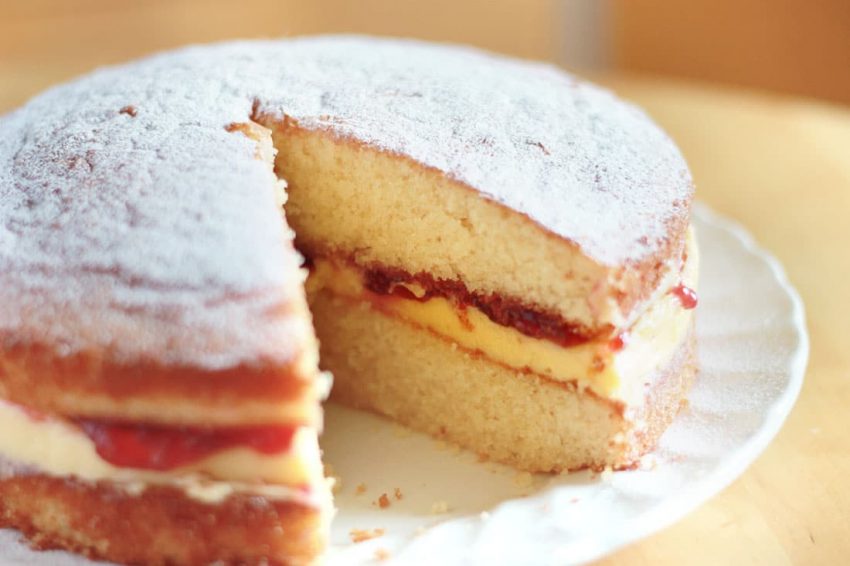 If you’ve ever watched the Great British Baking Show, you know how much the British enjoy their sweet treats. And most of all, they love their cakes, which is perfectly understandable since they’ve been baking cakes of one kind or another since the Middle Ages. According to food historians, however, those early, rustic cakes were heavy, stodgy things that would be practically unrecognizable today as cakes, and they were savored by only the very wealthy.

But the establishment of trade routes in the 16th century brought sugar from the Americas and spices from the East to Britain, opening up a whole new world of cakes and making them accessible to more people—if only on special occasions. By Victorian times, inventions and manufacturing processes inspired by the industrial revolution led to cake shops popping up in High Streets across the nation, and today, you can buy a delicious cake in any supermarket or enjoy a lovely slice—accompanied by a decent cup of coffee—in cafes found in venues ranging from stately homes to garden centres.

Skilled cake baking and elaborate decoration remain a traditional source of pride for home bakers across Britain, and competitions—such as those held at agricultural shows—are always friendly but just a little fierce. In The Marmalade Murders, the display of home baking starts out delicious…

It was a bountiful, mouthwatering display: fruit and savoury pies of every description, their golden brown crusts embellished with cutout leaves, acorns, or flowers; traditional Welsh cakes speckled with currants; ginger biscuits; cherry scones; chocolate Swiss rolls; date and walnut loaves; summer puddings; and, of course, cakes. Round and square cakes in two classes: plain and fancy, all set out on white plates. Victoria sponges and lemon drizzles dominated the plain category, while two-layer iced chocolate and walnut cakes shone in the fancy category. In the centre of the table, on a raised silver cake stand, was a two-layer round cake, decorated in perfectly piped roses in graduated shades of frosting from red to a mid-range pink to a pale pink. A showy red rosette was affixed to the cake stand. Its trailing red ribbon, upon which Best in Show was emblazoned in yellow, flowed over a silver cake server.

… but ends up diabolical:

Penny raised the tablecloth and, lowering her head, peered under the table. Then, she lifted the cloth higher and steadying herself with one hand on the table, sank to her knees. “I think we found Florence’s carrot cake,” she said, looking over her shoulder at Mrs. Lloyd. “And that’s not all.” 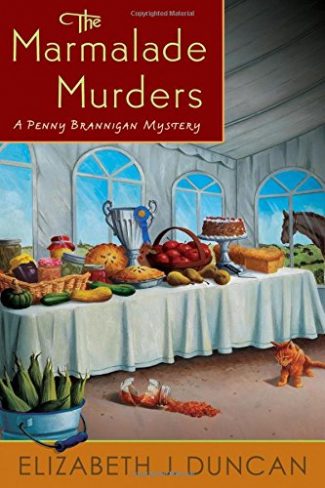 Cake is always served at meetings of the Women’s Institute, renamed the Welsh Women’s Guild in The Marmalade Murders. Expecting a larger attendance than usual when the president of the local guild is found dead under the cake table along with the missing carrot cake, Florence Semble thoughtfully brings an extra Victoria sponge to the meeting. Because heaven knows, the last thing you ever want to run out of is cake, no matter how grim the circumstances.

Sometimes called a Victoria sandwich, this type of sponge cake is typically filled with strawberry or raspberry jam, with optional whipped cream. Named after Queen Victoria (1819-1901), it became a popular tea time treat during her reign. Although the traditional method of making a sponge cake dates back to 1615, the Victoria sponge took on its fluffy modern form in the 1840s when baking powder was invented.

Speaking of baking powder, British recipes differ from North American ones in several ways. First, dry ingredients such as sugar and flour are measured by weight (ounces or grams) not volume (cups). And the ingredients themselves are often different. For instance, in Britain, a cake recipe would call for caster sugar, which is finer than granulated but not as fine as icing sugar.

Florence has kindly shared her recipe for Victoria sponge, adapted here for North American bakers. It’s easy to make, always impresses, and everybody loves it.

On your marks, get set, bake!

Preheat oven to 350 degrees. Using parchment or wax paper, grease two round cake pans with margarine or butter, or use nonstick cooking spray. In a medium bowl, stir together flour, baking soda, baking powder and salt.

In a large bowl, using electric mixer, beat the butter and sugar until creamy. Beat in the egg, vanilla, and almond extract until mixture is smooth.

Divide batter between the two pans. Bake for 20 to 25 minutes until golden brown and a toothpick inserted into the middle of the cakes comes away clean.

Cool in pans for five minutes, then turn out onto a wire rack and allow to cool completely. When cool, top the bottom layer with a generous layer of raspberry or strawberry jam, then freshly whipped cream. Add top layer and dust with icing sugar.

For a variation, use the batter to make cupcakes, then slice each one in half, spread the bottom half with jam and freshly whipped cream, replace top and dust with a little icing sugar.