February 10, 2020
Join Olen Steinhauer for a list of some of his favorite films that feature intersections between business and politics, perfect to watch to get in the mood for reading Steinhauer's Milo Weaver series, especially his latest upcoming thriller, The Last Tourist.

Though this list could run many pages (even just focusing on films of the seventies), I’m sharing a few films that, whether I intended it or not, certainly informed my approach to The Last Tourist with their deft and entertaining critiques of the intersection of politics and business.

For a perfect distillation of post-Watergate distrust of political and corporate leaders, this is the quintessential seventies paranoia film. Written by Alan J. Pakula as the second in his so-called “Political Paranoia trilogy,” including the also excellent Klute and All the President’s Men.

And if cold-blooded business interests and paranoia are of interest, Gene Hackman’s stunning performance will take you all the way there and back.

This Polanski classic uses the noir tropes of Raymond Chandler to tell a brutal story of Big Water. Faye Dunaway would follow her turn in this film the very next year with another classic of seventies paranoia, Three Days of the Condor, based on James Grady’s seminal novel, Six Days of the Condor.

Another breathtaking performance, this one by Meryl Streep (and Cher does a hell of a job, too), directed by the incomparable Mike Nichols. The conspiracy Big Nuclear is approached on the micro-level, leading to an utterly compelling and horrifying film.

To my mind, one of the greatest intelligence-world films of all time, which deftly outlines the intersection between foreign policy, espionage, and business interests while never losing track of the individuals caught in the cogs of the machine. Loosely based on Robert Baer’s See No Evil.

As 1974 produced a deluge of classics, 2005 gave us not only Syriana but this beautifully done exposé on Big Pharma, based on the John le Carré novel of the same name.

Listen to an audio excerpt of The Last Tourist by Olen Steinhauer: 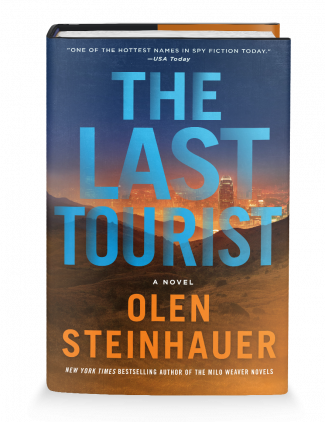