January 20, 2020
Welcome back to the Criminal Element Book Club, where we are reading The Tourist by Olen Steinhauer. If you're just joining us, find links from the previous weeks below and catch up. This week, we're presenting an introduction to The Tourist from Olen Steinhauer, which is featured in the Signature Edition of the new paperback. We hope everyone is reading their copy of The Tourist now, because next week, we're going to be opening up for a Q&A with Olen Steinhauer, and we want to hear from you. Happy reading and see you next week! 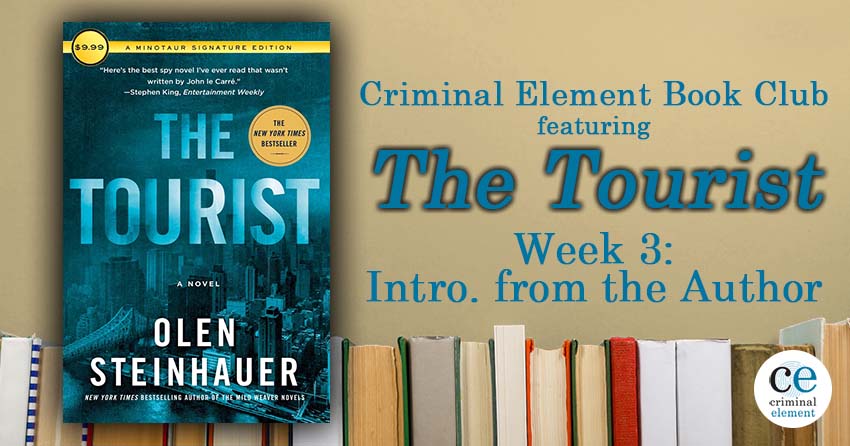 An Introduction from the Author

The idea of a Tourist as a kind of intelligence agent sprang out of my own lifestyle in 2007. I’d never been a spy, committed murder, or smuggled state secrets across borders, but for the previous six years I’d lived as a novelist in Budapest, existing in that tenuous non-place where many expatriates exist. It’s neither the home you’ve left behind, nor an adopted culture—instead, it’s somewhere in between: a country of the mind, in which English is the national language, the Habsburg buildings are an outdoor museum made just for you, and because of your disconnection from the culture, you can arrange your daily details pretty much as you’d like.

It’s a world without roots, carrying within it all the pros and cons this suggests, and until the birth of my daughter, the rootlessness of the expat felt like a powerful thing to possess. I knew that at any moment, if necessary, I could disappear. Therein lies freedom.

Tourism is expatriatism on steroids. It’s born out of that teen-ager inside us who wishes we had a bottomless credit card and could move, day-to-day, week-to-week, for the rest of our days. Travel light, leave little trace, and avoid the practicalities most poor citizens must deal with. State taxes, pesky neighbors, and even luggage: When our clothes are dirty, we’ll just buy new ones.

“Autonomy,” says the Black Book of Tourism, “is the most attractive aspect of Tourism. When you were taken from your cubicle and handed off to one of those bloodless agents who drove you, hooded, to a place of conversation, this was the cornerstone of the pitch. See the world! Live well! Leave paperwork behind! It’s called Tourism because it’s an endless vacation!”

Yet there’s more than adolescent fantasy at work in The Tourist, for what interested me was the effect such a lifestyle would have on someone who’d been at it for years, homeless and rootless, his raison d’etre merely the next job.  What happens after the initial high of absolute freedom?

Like their small- t namesakes, Tourists are well advised to leave trust behind, but unlike tourists or expats, their travels are nearly always solo, and given their brief, work-filled stays, there’s no possibility of finding love along the way. Nor can the Tourist check out of the hotel and head home to a spouse and child who serve as checks on reality. Who could survive such a life?

This, really, is why I write espionage fiction: to explore the effect a life of deceit and duplicity has on essentially moral people. It’s a life that strikes me—the “me” who at the time was preparing for fatherhood—as finally crushing, which is why when the book opens, we’re introduced to our Tourist-extraordinaire, Milo Weaver, with the words: Four hours after his failed suicide attempt, he descended toward Aerodrom Ljubljana.

Certainly there are some who would thrive on this life—we’re not all built the same—however, I’m pretty sure I wouldn’t want to invite those individuals over for a dinner party.

What surprised me, as I wrote The Tourist, was how such a simple concept—the unmoored intelligence agent—grew tendrils, its scope spreading wider until it blocked out everything. Novelists live for ideas like this, ones that produce stories wherever you look. While it may not make the job easier, it’s certainly more enjoyable when your cup runneth over. As a result, The Tourist unexpectedly spawned two more books—The Nearest Exit and An American Spy—to form a trilogy. And even now, having published two standalones, I’m still unable to shake the shadow of Milo Weaver. He’s so persistent that he’s making an appearance in a new novel I’m working on now. And as soon as he showed his haggard face, the outlines of new Milo novels began to appear to me, like magic.

There was a time when Tourism, the rootlessness and the danger, would have excited me outside the pages of a novel. Back then, I had no idea that the greatest challenges would arrive from a different quarter. Perhaps that’s why I gave Milo both worlds: He begins as a Tourist, then leaves that life to take on marriage and fatherhood. He thinks his worries are over, but he’s just as naïve as I once was, dreaming of passports and open-ended credit cards and the light step of the unencumbered.

Every fool gets to be young once.