A strange thing happens when I begin working on a new book. I get a short way in—maybe a couple of paragraphs or a handful of pages, sometimes as far as two or three chapters—and I hear a familiar voice in my head. Usually, the voice is trying to make a flippant aside or a snappy remark, and I have to stop myself and recognize what’s happening: it’s the Good Thief, Charlie Howard, trying to break his way into my book.

I guess it’s inevitable. Charlie took center stage in my first novel, The Good Thief’s Guide to Amsterdam, and I went on to write four more mystery novels about his adventures in Paris, Vegas, Venice, and Berlin. I had a lot of fun writing those books. I had even more fun researching them. And, one day, I hope to write more. After all, I’d like to know what happens to Charlie next. (And not just because I’m itching to visit his next destination).

Lately, though, it occurred to me that I had some time available to catch up with Charlie again. Instead of having him try to nudge his way into one of my thrillers, I could devote a long(ish) short story to him. And after all the prodding he’s been doing over the past couple of years, I guess it’s no surprise that his voice came right back to me and the story tumbled out.

The result is The Good Thief’s Guide to Murder. It’s a prequel, of sorts, to Charlie’s first full-length mystery in Amsterdam. The story is set in the French Riviera during the Cannes Film Festival, and it features a reclusive American novelist and screenwriter Charlie would very much like to burgle. But when the job goes bad (as it so often does), Charlie finds himself with a murder to solve…

If you’re a fan of the other books in the Good Thief series, I hope you’ll find much to enjoy here. There’s the usual lockpicking and sneaking around. There’s some armchair traveling to be done. There’s a murderer to catch and some flirty phone calls between Charlie and his literary agent, Victoria. And there’s that Charlie Howard voice—playful, irreverent, insistent.

And the best of thing of all? You can get your copy of The Good Thief’s Guide to Murder absolutely free because I’ve teamed up with a group of terrific crime and mystery authors to give a bunch of fantastic stories away.

So go ahead and nab your free copy of The Good Thief’s Guide to Murder. Here’s hoping you’ll enjoy catching up with Charlie as much as I have! 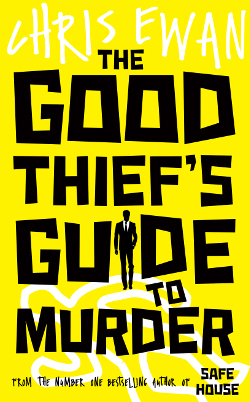 Review: The Good Thief’s Guide to Murder by Chris Ewan

The Good Thief's Guide to Murder by Chris Ewan is a short story in the Good Thief's Guide series featuring master thief Charlie Howard. Read our exclusive excerpt and learn how you can read the entire story for free!  Excerpt Cat burglars are pretty cool, right? I’ve always thought so. They climb in through high windows.… Chris Ewan's Long Time Lost is a fast-paced, standalone thriller. Long Time Lost is a very sharp, finely-crafted thriller from page one. To kick off the story, Chris Ewan takes us to the Isle of Man where Nick Miller provides an unusual product to his customers. He and his colleagues specialize in relocating at-risk individuals,…