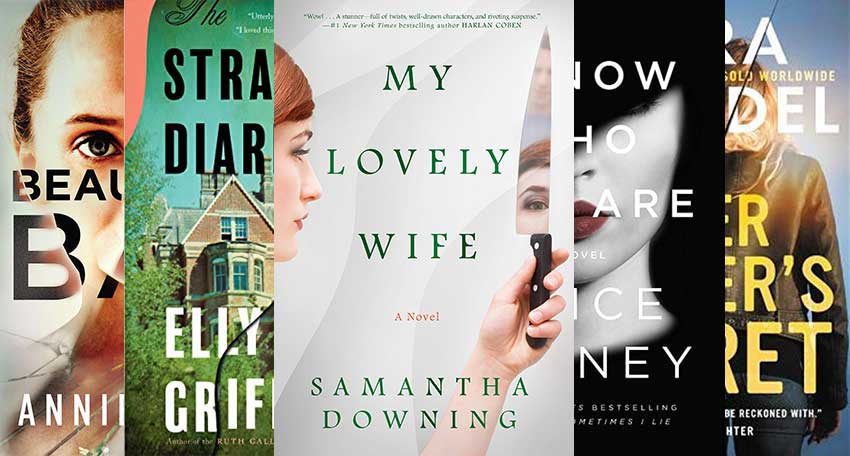 Hello again, reader! It’s officially spring, and I’m thrilled to spotlight these five March books that you’ll want to check out. When I’m not reading or writing about crime fiction as Crime by the Book, I can often be found perusing Criminal Element’s fantastic selection of crime book reviews and features.

Without further ado, let’s dive right into my picks for Best Books of March 2019! 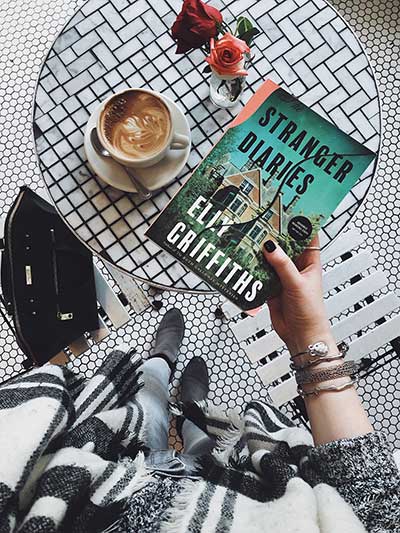 Best Book of the Month

The Stranger Diaries by Elly Griffiths

I absolutely adored Elly Griffiths’ standalone mystery The Stranger Diaries, which has me wondering how on earth did it take me this long to read a book by her?! This exceptional crime read puts a modern twist on Gothic suspense, blurring the line between fact and fiction to fantastic effect. In The Stranger Diaries, an English teacher who specializes in Gothic literature finds the work she teaches coming to life as a series of disturbing events plague her school. To make matters worse, these events all seem to be drawn from the work of our protagonist’s favorite Gothic suspense writer. Can she rewrite the ending of this story, or are those around her fated to meet a terrible end? Told from the perspectives of three women—the English teacher, her daughter, and a policewoman investigating the crimes—The Stranger Diaries is purely engrossing reading material. Griffiths crafts each of her story’s leading ladies with care, and establishes a sense of authenticity from page one with her sharp, thoughtful reflection of Gothic themes and tropes in her own work. Suffice it to say, I couldn’t have loved this book more! 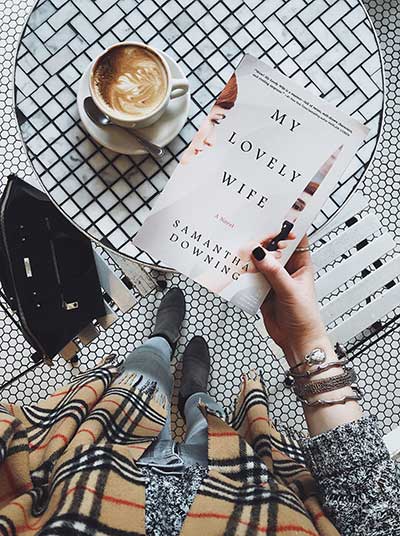 My Lovely Wife by Samantha Downing

Samantha Downing’s exceptional debut suspense novel is very fittingly being billed as “Mr. and Mrs. Smith meets Dexter”—and yes, it lives up to those very lofty comparisons! In this shocking page-turner, readers enter the twisted world of a married couple whose idea of a fun date night involves death. The protagonists of My Lovely Wife have it all: a beautiful home, perfect family, and years of happy marriage under their belts. But when things get a bit stale in their relationship, they decide to spice things up… by committing murder together. That’s right, this suspense novel follows a pair of married serial killers. If it sounds over the top, it is—but in the most fun way imaginable. Downing has crafted a book brimming with entertainment value; My Lovely Wife delivers excellent character development, satisfying plot twists, and all the drama you could hope for from a buzzy thriller. Razor-sharp and wickedly addictive, Downing’s debut may just be your next psychological suspense obsession. One thing’s for sure: after you read this book, you’ll never look at your neighbors the same way again.

Read our full review of My Lovely Wife! 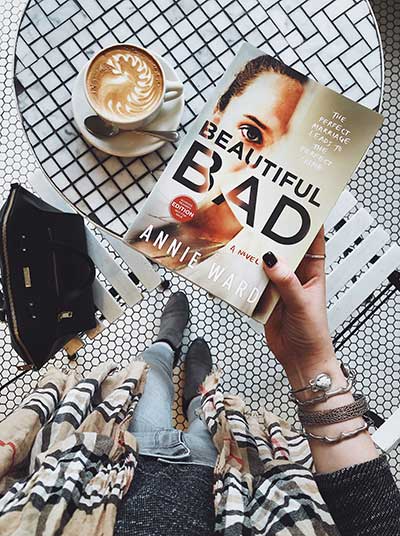 If psychological thrillers are your thing, but you’re looking for something that pushes the envelope a bit, check out Annie Ward’s Beautiful Bad. You’ve never read a psychological thriller quite like this one. Annie Ward takes readers into the innermost secrets of a marriage and around the globe in a story both intimate and epic in scope. Maddie and Ian met under the most unusual of circumstances: Maddie was a travel writer working overseas, and Ian worked in the military. The two fell head over heels for each other, overcoming almost unthinkable obstacles to make their relationship work. Now, fast forward, and Maddie and Ian are living a quiet life in the American Midwest—but the shadows of their past aren’t far behind. When a camping accident leaves Maddie badly scarred, she begins participating in writing therapy—and the work she and her therapist do together begins to uncover dark secrets she had long since buried. This gripping thriller spans decades and continents, journeying back in time to the beginning of Maddie and Ian’s relationship, and building towards a date known only as “The Day of the Killing”—a day in which this family’s story will be changed forever. It’s a truly gripping, authentic, and heartfelt thriller. 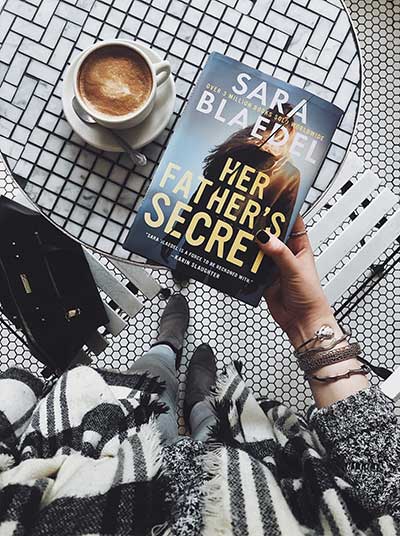 Her Father’s Secret by Sara Blaedel

Denmark’s Queen of Crime, Sara Blaedel, is back with the second installment in her Family Secrets trilogy, Her Father’s Secret. If Scandinavian noir is your cup of tea, you’ll want to check out Blaedel’s newest venture. Blending Scandinavian sensibility with an American mystery, Blaedel takes her Danish protagonist out of Copenhagen and into rural Wisconsin in her new trilogy. In Her Father’s Secret, protagonist Ilka has ventured across the ocean to learn the truth about her estranged father, a man who abandoned her and her mother when she was a young girl. What Ilka discovers in Wisconsin is more than she could have imagined. Her father has passed away and has willed his struggling business to his daughter, Ilka. So what exactly is this business? It’s a funeral home. Ilka suddenly finds herself in over her head, dealing with her father’s debts and trying to keep the business afloat, all while sorting through her father’s estate. When a local woman is murdered, Ilka finds herself in the crosshairs of an increasingly dangerous situation. Who harmed this woman? And what connection did Ilka’s father have with the deceased? Blaedel uses her sharp storytelling and endearing character development to craft a compelling mystery that will keep readers turning the pages. 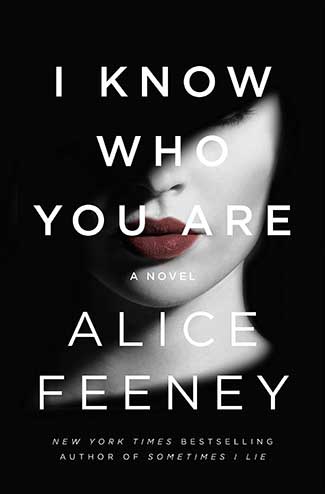 I Know Who You Are by Alice Feeney

Alice Feeney’s exceptional 2018 release Sometimes I Lie absolutely blew me away (if you haven’t read it yet, it’s a must-read!), and I’m eagerly counting down the days until her next psychological thriller hits shelves! Sometimes I Lie was a binge-worthy confection: twisty, turny, and dramatic in all the right ways. I’m hoping I Know Who You Are, Feeney’s forthcoming release, will be just the same!

Plot Details from the Publisher:

Meet Aimee Sinclair: the actress everyone thinks they know but can’t remember where from.

When Aimee comes home and discovers her husband is missing, she doesn’t seem to know what to do or how to act. The police think she’s hiding something and they’re right, she is―but perhaps not what they thought. Aimee has a secret she’s never shared, and yet, she suspects that someone knows. As she struggles to keep her career and sanity intact, her past comes back to haunt her in ways more dangerous than she could have ever imagined.

In I Know Who You Are, Alice Feeney proves that she is a master of brilliantly complicated plots and killer twists that will keep you guessing until the final page.