Creative Outlets and Other Such Crimes

August 11, 2021
Join Jeffrey B. Burton, author of The Keepers, as he discusses the various—and quite hilarious—creative pursuits that led to him becoming an author. 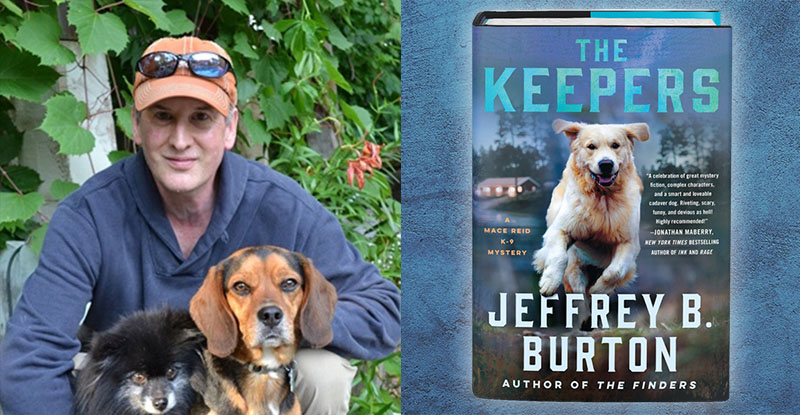 I dodged into the middle of the road. The car’s headlights were forty maybe fifty yards away. I held up both palms as though to wave the driver down, a look of terror smeared across my features. I glanced back from whence I’d fled; from the lakeside—from his lair—and saw the madman gaining on me. There’d be no time for help from a passing motorist.

I tore across the street.

The man in the potato-sack mask sprinted after me, axe held high above his head as he flew past the car I’d tried to flag down. I saw no way to lose potato-sack or shake him off my trail.

Of course, I didn’t want to lose him as the man in the potato-sack mask wielding an axe that appeared stolen from The Texas Chain Saw Massacre was my best friend. It was the summer after eighth grade. I was a bit tall for my age, but my friend was way tall for fourteen, ergo he got to play potato-mask killer for the scene we’d put on for the benefit of the oncoming vehicle.

Though we staged a half dozen additional performances before becoming bored, it became apparent we’d failed miserably in the Suspension of Disbelief department. No vehicles swerved to the side of the road, no foot chase ensued, and no squad cars were summoned. All motorists knew they were being pranked. Either that or the drivers recognized me and figured: Bout time that Burton boy got chopped to kindling. Been wanting to do it myself.

During a recent book talk, I was asked when I began writing fiction. I shrugged off the query with I got serious around the time my daughter was born. But the question got me thinking about the various creative outlets I’d bumbled through before I took pen to paper.

The night of the axe murderer was during the same summer of the botched film. My parents had an old Super 8 movie camera gathering dust in the basement so my tall friend along with another buddy and I decided to go Spielberg. Long story short—a giant (tall friend) thaws out from when he was frozen inside a glacier at the dawn of an ice age (just go with it), swims to shore, and terrorizes a suburb that looks identical to the one in which we lived. After killing people and busting vehicles (we filled a toy milk truck with milk so the giant could drink from it after he snapped it in two). Then, for no good reason other than ripping off King Kong, the giant gets a hankering to climb a tower (the chimney on my parent’s rambler), allowing the Air Force to take him out (since our parents were away at work, the fun part came when we blew the shit out of model airplanes with M-80s and lawnmower gas).

Though dead serious about making a good movie—nix that, we were making a film—everything went to hell. First off, we shot at low angles so my friend would look massive, unfortunately, you could spot his underwear in half the scenes (prehistoric Fruit of the Loom). We filled up my G.I. Joe doll with Ketchup so when the giant rips my head off—blood spurts everywhere, a hard R rating. However, I sported a Gophers jersey while G.I. Joe was dressed in camo (a continuity error). And no matter how hard we tried, we had to keep reshooting the tower attack as the bamboo poles supporting the fighter planes with fish line kept swooping into the camera frame.

One scene called for the giant to yank up a tree and fling it at me, so we kept hauling this heavy-ass log up onto the roof so it could be tossed at me as I raced across the lawn. It took a dozen takes to get something marginally passable. Unforeseen, though, it tore fist-sized divots out of the front lawn. Dad came home, spotted them from the driveway, and walked over to inspect what had happened to his yard. I ran out to see if I would survive the evening.

Dad stared at me a long moment. “I think you’re grounded.”

The film got shelved until after I’d served my time.

Years later came the answering machine productions, back when the machines were the size of a miniature briefcase, really just glorified tape recorders. I was working your typical crappy post-college job to cover the rent and bought one for my apartment. I’d come up with a new vignette to record every month, but there’s one particular message I wish I still had. Props used in this endeavor included a wooden table, a pair of dress shoes, a bedroom door, and a cap gun. The script was minimalistic:

Me: Let me get the door. I’ll be right back.

Sound Effect: Dress shoes on wooden table to indicate stroll to front door, and then opening of door.

Sound Effect: Shoot cap gun, and then slow, Hitchcockian-like footsteps as someone walks back to the phone.

Creepy Voice: You’ve got the wrong number. (Then maniacal laughter)

Okay, a normal person could have recorded this in about four minutes. It took me the same time it took Egyptians to build their pyramids. But . . . BUT . . . it went viral, which, in those days, meant I came home to 20 blinking lights from friends and relatives and amused marketers.

Yup, I was trending. Sadly, idiot me recorded over it the following month.

During this same post-college era, when you’ve outgrown the college bars, a buddy and I began frequenting the Radisson in St. Paul, near the river. They had a bar on the top floor that rotated 360 degrees (very posh). And, being the devious shits we were, we’d figured out you could call hotel rooms per dialing their room numbers from the house phones in the elevator atriums, so, as we were leaving one night, my buddy and I got to plotting . . .

Here’s how it went down:

Innocent Male Guest: Hello (very sleepy, it being one a.m.)

Innocent Male Guest after long pause: I didn’t . . . ask for any girl.

In this case, our story ends where this poor sap’s story begins. I’d like to think he was in town on business from, say, Nebraska—here to buy grain or something—and, for the rest of his life, he’s been telling anyone who’d listen about the hotel pimp he’d barely escaped from in St. Paul, Minnesota.

It took me years—much trial and error—before I finally tripped over my authentic creative outlet. Quite frankly, there’s not a lot of money to be made in axe murders or bad home movies, answering machine messages, or prank phone calls.

Read More: A new excerpt from Jeffrey B. Burton’s The Keepers

About The Keepers by Jeffrey B. Burton:

Mason “Mace” Reid lives on the outskirts of Chicago and specializes in human remains detection—that is, he trains dogs to hunt for dead bodies. He calls his pack of cadaver dogs The Finders, and his prize pupil is a golden retriever named Vira.

When Mace Reid and Vira are called in to search Washington Park at three o’clock in the morning, what they find has them running for their very lives. The trail of murder and mayhem Mace and CPD Officer Kippy Gimm have been following leads them to uncover treachery and corruption at the highest level, and their discoveries do not bode well for them . . . nor for the Windy City itself.

The Keepers is an exciting, fast-paced mystery filled with courageous dogs you’ll want to root for.

Jeffrey B. Burton is the author of The Chessman and The Eulogist. He is an active member of Mystery Writers of America, International Thriller Writers and the Horror Writers Association and lives in St. Paul, Minnesota with his family.