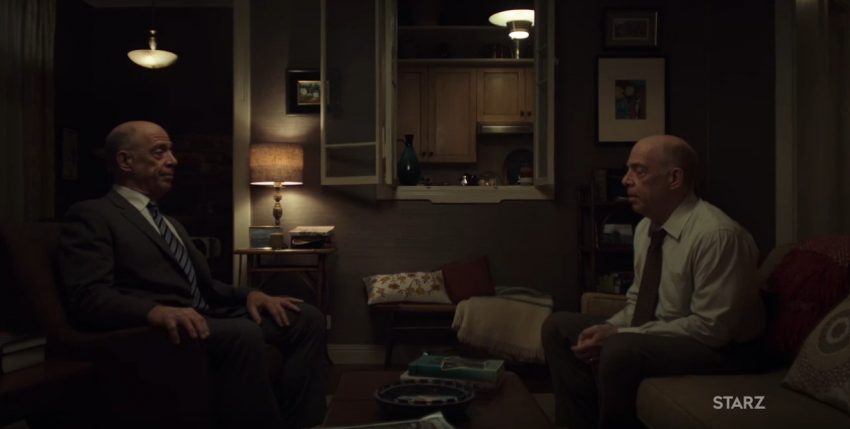 If you haven’t heard of the TV series Counterpart, you’re not alone, but it’s time to get familiar with it. The news from earlier this week that the show has been cancelled by Starz just ahead of its second season finale is immensely disappointing, but each of the twenty episodes already produced is absolutely worth watching.

Counterpart stars Oscar winner J.K. Simmons as Howard Silk, a low-ranking analyst in Berlin who visits his comatose wife in the hospital each day. He is shocked to discover that the company he has been working for isn’t merely a government agency, but instead one that manages the Crossing, an underground area that offers a pathway to another world, one that looks very similar to the one Howard knows. In this Prime world, people look identical but their lives have diverged in small, initially unnoticeable ways. While Howard is gentle and kind, Howard Prime is coarse, cruel, and far more read into the program.

Watching both Howards interact with each other is one of the most appealing aspects of this show, which slowly unravels the details of what is different between the alpha and prime worlds. A group of unseen chiefs operate as Management, transmitting their messages to agents via monotone pronouncements by translators wearing headphones. There is an extremely dated feel to the way that this slow-burn but riveting thriller unfolds each hour, with almost purposely antiquated technology in use to handle this very high-level concept. 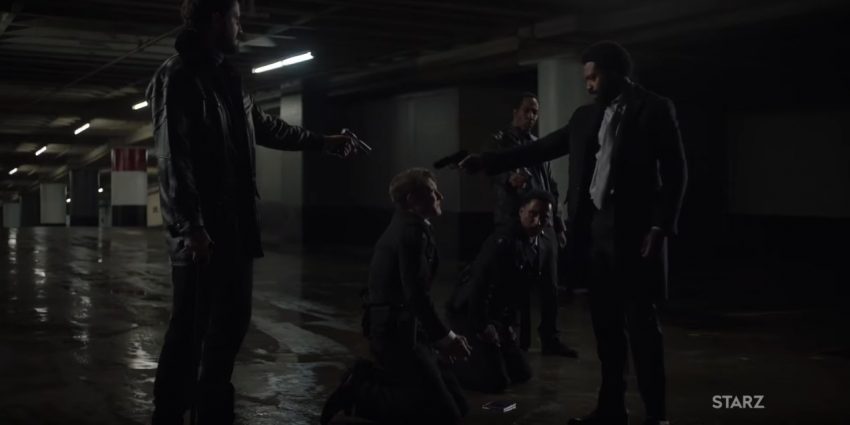 The alpha and prime versions of each character are easily able to pass for one another because they are indeed the same, and Simmons, seen most onscreen opposite himself, is particularly mesmerizing because the actor is able to distinguish his two selves without any physical indicators like facial hair or even an altered wardrobe. Discovering what seemingly minor events have changed their trajectories and altered their perspectives is a captivating and ultimately rewarding process, and it becomes clear that even those at the top aren’t entirely certain of what has transpired and who is to blame for it.

The cause of the most significant rift between the two worlds is the release of a deadly flu that decimated a good portion of the prime population, and the belief that the alpha world was responsible for its creation has led to the rise of a militant group seeking vengeance. Training children at a young age to act exactly like their others so that they can one day show up and assume their lives without anyone knowing is the fiercest weapon that this group has, since their targets are completely unassuming. This show delivered one of its finest hours when it delved into the backstory of one mole whose entire life has been spent preparing to take someone else’s place.

a constant level of excellence

This show brilliantly blends an old-fashioned sense of mystery with a truly detailed and thought-out vision of how these two worlds coexist and clash. Season two includes a full flashback episode that begins in 1987 at the point of separation and charts out the establishment of Management and the agency, sifting through the many layers that make up this show’s complex identity. Almost immediately, it becomes so much more than just the hat trick of one incredible actor playing two parts, zooming out to show how insignificant both Howards would be if not for the dedication they show to the people who matter most to them that enables them to survive.

Watching just the first episode of this show should be enough to indicate its value, and it only gets more interesting from there, reaching a constant level of excellence in its second season. Harry Lloyd, who had a memorable role early in season one of Game of Thrones as the golden crown-wearing Viserys Targaryen, is one of the show’s finest assets aside from Simmons as the alpha strategy director, along with Nazanin Boniadi as a prime spy living and operating in the alpha world. Unfortunately, this show’s longevity seems to have been doomed by an initial two-season order, giving Starz unrealistic expectations for its success. 100% ratings on Rotten Tomatoes for both seasons doesn’t appear to have been enough to save it. While it’s not completely dead yet, as its production company hopes to have a streaming service pick it up, it’s not looking great, and therefore it’s exactly the right time for a whole swarm of new viewers to dive deep into its inviting mystery.

Abe Friedtanzer is a film and television enthusiast, making sure to see every Oscar-nominated movie each year and watch every new TV pilot. He has covered numerous film festivals including Sundance and SXSW. When he’s not staring at a screen, Abe enjoys traveling the country with his wife, Arielle, and using bikeshare systems in whatever city he’s visiting. You can read his reviews at www.MoviesWithAbe.com and www.TVwithAbe.com.