Cooking the Books: Till Death Do Us Tart by Ellie Alexander 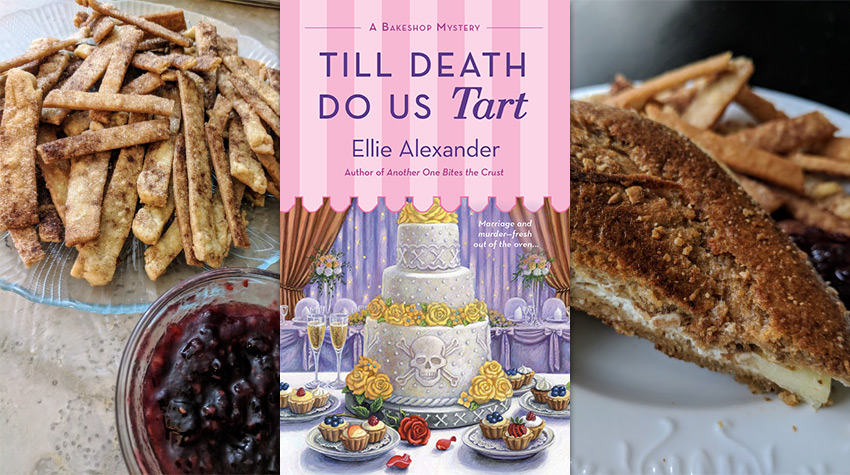 Love is in the air in the artsy Oregon town of Ashland as the inhabitants conspire to throw a dream Elizabethan wedding for two of their favorite citizens: Helen Capshaw, part-owner of the beloved Torte bakery, and the Professor, as Ashland’s lead police detective is fondly known. Jules Capshaw, Helen’s daughter and our heroine, is trying not to show how frazzled she is as she arranges and bakes for the surprise wedding while trying to keep the preparations hidden from her mother. It’s bad enough that she’s simultaneously overseeing the remodeling of Torte, but her estranged husband Carlos is also coming to town to introduce her to his son, Ramiro, adding an entirely new level of things for her to worry about. Will she be able to smother her feelings for Carlos? Will Ramiro like her, and will it matter if he does? Perhaps it’s for the best that she has so much baking-related work to do so she’ll have less time to dwell on her love life.

But then her good friend Lance Rousseau returns from his abrupt “vacation” and confesses to her why he’s been acting so strangely recently. Turns out his estranged father is seriously ailing, and he had been summoned to his bedside. While their reconciliation brings them both joy, Lance fears that others may not feel the same way—possibly even putting his father’s life in danger. In order to prevent this, he wants Jules to let him invite a few more guests to her mother’s wedding in the hopes that he’ll be able to smoke out a potential murderer once they’re all gathered together.

Jules is hesitant to agree, but her concern for her friend overcomes her fears. She lives to regret it, though, when Megan—the private investigator who Lance brings along as his date—sips from a poisoned cup and winds up in the hospital. Megan is convinced that the poison was meant for Jules, but when Megan herself is found dead soon after, motives get much murkier. Soon, Jules finds herself doubting everyone she meets as she strives to figure out who might have had it in for either the dead woman or herself.

Till Death Do Us Tart is a multi-layered treat of a novel. Series fans will love how it concludes several long-running plotlines, while newcomers can look forward to what’s next for Jules. I very much enjoyed the push-pull of her relationship with Carlos, and I was heartened by all the love and friendship on display.

Read an excerpt from Till Death Do Us Tart, then take a visual tour with GIFnotes!

The recipe section included six of the tempting dishes described in the novel, and since I couldn’t quite decide which to pick, I chose two short ones to try out for this column. The first was this fun dessert: 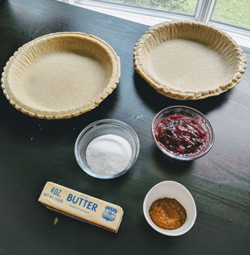 2 premade pie crusts (you can make your own like Jules, or for a quick, fun dessert, buy refrigerated crusts)

*If desired, serve in fry containers from your local party store

Roll out pie crust into a thin sheet. Use a pizza cutter to cut ½-inch strips. Melt butter. Brush each side of the strips with butter, then sprinkle with cinnamon and sugar. Place on a greased cookie sheet. Bake at 350 degrees for 10 to 12 minutes. Serve immediately with raspberry-jam dipping sauce. For a fun party dessert, serve pie fries in fry boxes with a side of “ketchup” aka raspberry jam. 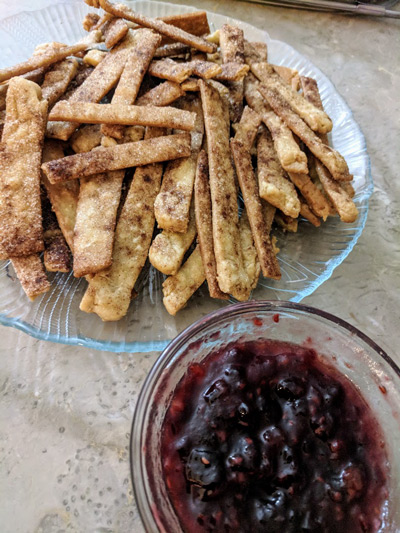 I had a dickens of a time getting these to look like actual fries—I wound up cutting the slices of the second batch in half—but these were a fast and delicious treat, especially when dipped in the raspberry jam. Also, instead of putting together a half-cup of cinnamon and sugar, I just sprinkled the pastry with each, eyeballing the amount. I’ve learned the hard way that creating a cinnamon-sugar mix pre-application is an imprecise art that results in far too much of the blend afterward.

Next, my lovely assistant Karin and I assembled these: 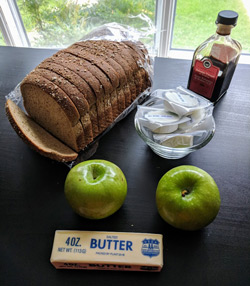 Slice the Granny Smith apples. Spread a layer of goat cheese on each side of the bread. Layer in apple slices. Drizzle with balsamic vinegar. Melt 2 tablespoons of butter in a frying pan on medium heat. Grill sandwich on both sides until bread is crispy and cheese has melted (approximately two to three minutes on each side.) 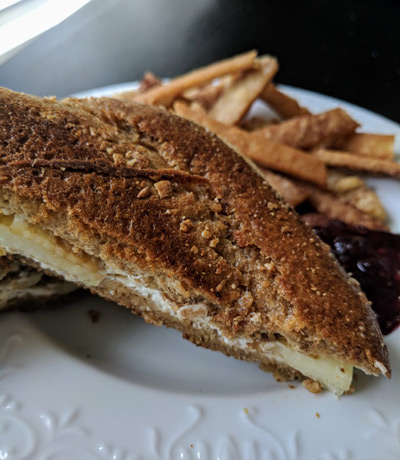 Black bread was surprisingly hard to find, so we settled on a sweet honey rye. I really like the idea of this sandwich, but it’s missing something in the execution, though I can’t quite figure out what. Part of it, I’m convinced, is the goat cheese. We used a spreadable version, and there was simply no melting that without burning the bread. I’d probably make the pie fries again, but likely won’t repeat this sandwich.

Next week, we travel back to the Midwest to serve up a delicious pasta dish. Do join me!