Cooking the Books: The Walking Bread by Winnie Archer 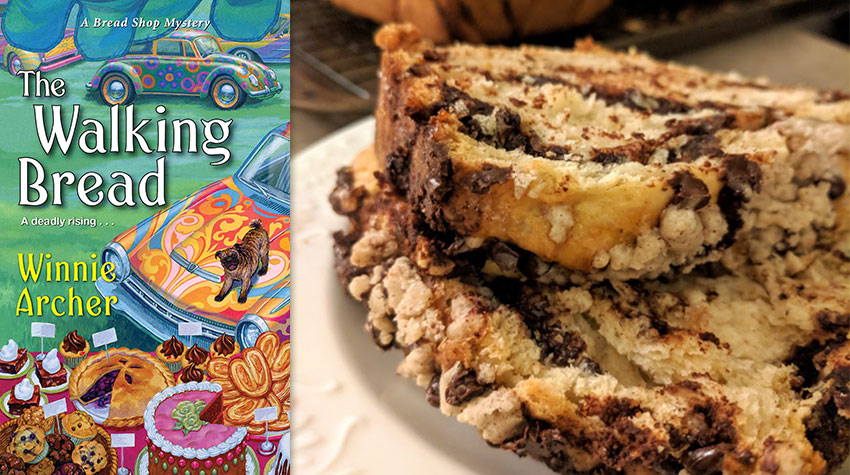 Our heroine Ivy Culpepper’s latest photography job is to document Santa Sofia’s annual art car parade and ball. Her older brother, Billy, has been a contender in the parade for nearly decades now, but his innovative creations have never yet won. Max Litman, a local real estate developer who’s even more obsessed with the parade than Billy, has won year after year, and the Culpeppers suspect it’s due more to bribery than actual talent on Max’s part.

This year, Billy has designed an Alice in Wonderland car in homage to his late mother, who inculcated her love of reading in her children. The Culpeppers think Billy has a real shot at the grand prize, but then Ivy finds Max dead in his own zombie-inspired art car alongside Billy’s childhood copy of the Lewis Carroll classic.

Ivy’s best friend and Billy’s girlfriend, Emmaline Davis, is the deputy sheriff of Santa Sofia—and the one who does most of the heavy lifting when it comes to actual police work. Em’s boss, Sheriff Robert Lane, is generally more interested in the political side of his job, which might be why he’s well aware of the terrible optics of having his lead investigator be someone who’s dating the primary suspect. Em is taken off the case, and with no other viable suspects, it looks like the police will be booking Billy sooner rather than later. Ivy has no choice but to investigate—with the help of her delightful circle of friends—to clear her brother’s name.

I enjoyed the clever mystery set up in these pages and especially appreciated how well the diversity of Southern California was represented. Ivy interacts with people of all races, ages, and social classes on a daily basis, and it was really refreshing, not to mention realistic, to read. Winnie Archer’s writing style is also engaging, especially when she’s discussing a love of literature and baking.

That love of baking extends to the recipe section, where two of the three recipes were for variations on chocolate bread. I decided to try out this one: 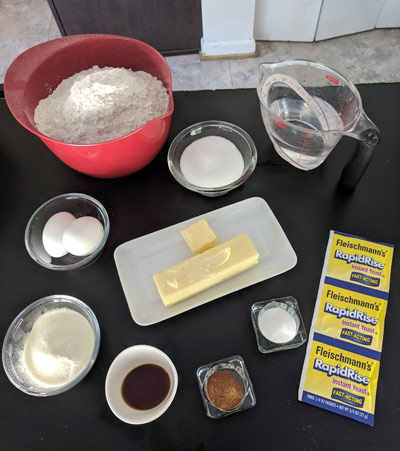 *Reduce the salt to 2 ¼ teaspoons if you use salted butter. 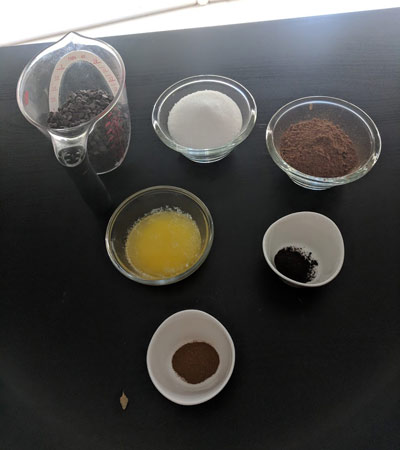 ⅓ cup cocoa powder of your choice, Dutch-process or natural

1. Combine all of the dough ingredients (add water gradually), mixing until everything is moistened. Add additional water if necessary to enable the dough to come together. Cover the bowl and let the dough rest for 20 minutes. Then mix/knead it until it is soft and smooth.

2. Place the dough in a lightly greased bowl and then cover the bowl. The dough is going to rise for about 1 ½ to 2 hours, until it is quite puffy.

3. Gently deflate the dough and divide it in half. Set the pieces aside, covered, while you make the filling.

4. To make the filling, combine the sugar, cinnamon, cocoa, and espresso. Stir in the melted butter. The mixture will look grainy and slick; that’s okay.

6. Smear each piece of the dough with half of the filling, coming to within an inch of the edges. 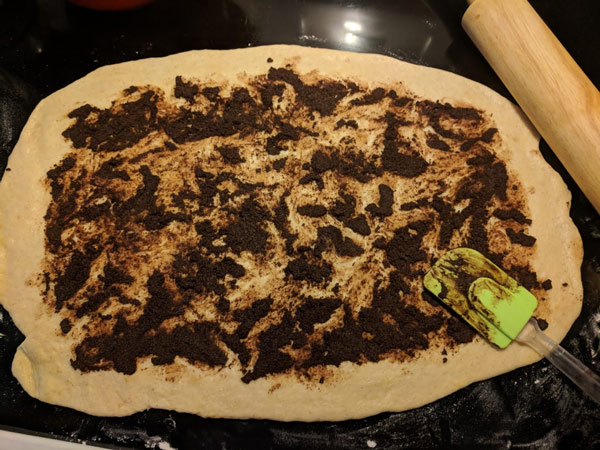 7. Scatter half the nuts and half the chopped chocolate/chips over each piece. If using standard-size chips, process them in a food processor first, to create smaller bits of chocolate and a less chunky filling. 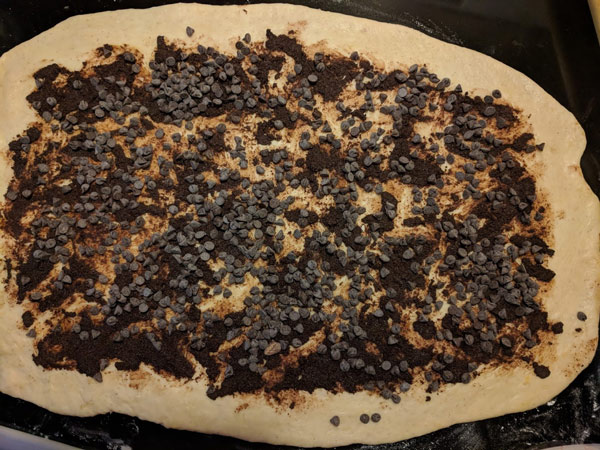 8. Starting with a short end, roll each piece gently into a log, sealing the seam and ends. Working with one log at a time, use a pair of scissors or a sharp knife to cut the log in half lengthwise (not crosswise) to make two pieces of dough about 10” long each; cut carefully, to prevent too much filling from spilling out. With the exposed filling side up, twist the two pieces into a braid, tucking the ends underneath. Repeat with the other log. Place each log into a lightly greased 9” x 5” loaf pan.

9. Brush each loaf with the egg glaze. Mix together the topping ingredients until crumbly, then sprinkle half of the topping over each loaf.

10. Tent each pan with plastic wrap and let the loaves rise until they’re very puffy and have crowned a good inch over the rim of the pan, about 1 ½ to 2 ½ hours. Toward the end of the rising time, preheat your oven to 300°F.

11. Bake the bread for 35 minutes. Tent lightly with foil and bake for an additional 15 to 25 minutes (for a total of 50 to 60 minutes); the loaves should be a deep golden brown.

12. To ensure the loaves are baked through, insert a digital thermometer into the center of one loaf. It should register at least 190°F.

13. Remove the loaves from the oven and immediately loosen the edges with a heat-proof spatula or table knife. Let the loaves cool for 10 minutes, then turn them out of the pans onto a rack to cool completely. 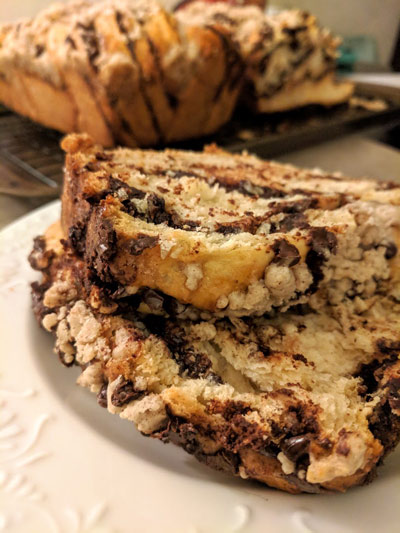 As you can see from the photos, instead of using a knife or scissors to halve the logs, I used a pizza cutter, which made for a much faster, cleaner separation. Shockingly, considering how disapproving I can be of excess sugar in most recipes, I honestly thought these weren’t as sweet as they might be. These babkas will definitely appeal to those whose sweet tooth is even milder than mine.

And despite Ms. Archer’s in-text depiction of baking as being simple and quick, I found this recipe to be considerably more complex and time-consuming than my usual attempt for this column. Which isn’t a criticism at all! There is something quite nice about creating something as beautiful as it is delicious, and these babkas were as gorgeous to look at as they were tasty to eat. Baking these definitely instilled in me a greater appreciation for professional bakers.

Next week, we travel in time with one of my favorite mystery series to satisfy my sweet tooth with a tasty cake. Do join me!