Cooking the Books: The Kremlin’s Candidate by Jason Matthews 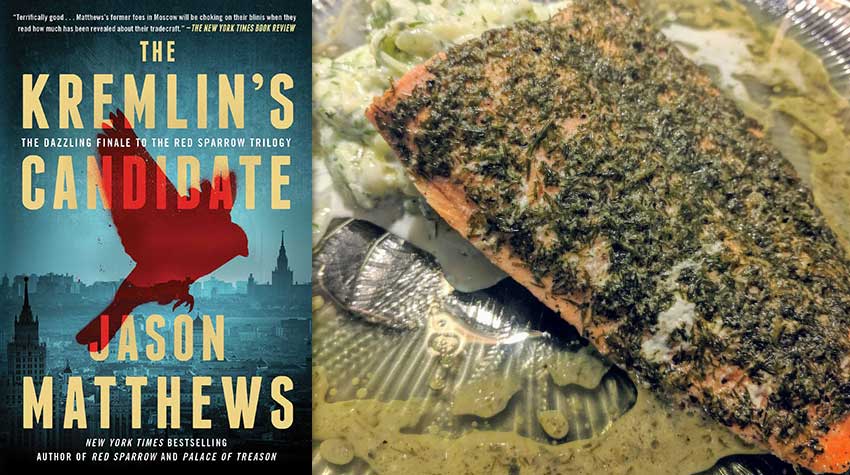 Weirdly, I thought that the final novel in the Red Sparrow Trilogy was at once its most realistic as well as its most wildly fanciful. There are details included that feel so authentic as to be absolutely factual, even if they don’t make for the most appetizing reading; I could honestly have done without the explicit detail of Vladimir Putin’s sexual peccadilloes, for example. Overall, however, The Kremlin’s Candidate is a grimly satisfying look at real life in the modern-day espionage services.

The novel opens with Putin plotting the assassination of an important member of the American intelligence community with an eye to filling the deceased’s vacated position with a handpicked mole who’s been in Russia’s employ for over a decade. This would be especially bad for Russian Counterintelligence Chief Dominika Egorova, as she’s been secretly feeding information to the Americans for years, primarily through her lover CIA agent, Nate Nash. With the help of Nate’s team, Dominika must race against time to discover and expose the Russian mole before her own cover is compromised, an exposure that would sentence her to certain death.

The action moves from Russia to New York City to Hong Kong to even more exotic locales as traps are set for and sprung by our star-crossed lovers. Dominika and Nate must overcome all manner of tribulation as they strive to keep each other safe in a world filled with treachery and lies.

While I found that the trilogy came to its bittersweet conclusion quite convincingly, I did feel as if certain areas of espionage were entirely overlooked. Rapid advances in communications technology, in tandem with changes in social expectations, conveyed upon some of the geopolitical commentary an oddly dated quality given that the book was published a mere year ago. Given the amount of focus on Russia, it’s odd that practically nothing is said of cyber-espionage.

It also struck me as somewhat ironic that Jason Matthews is—in these pages—quite critical of the (unnamed) Obama administration for its perceived dovishness; I can only imagine the apoplectic fits that the current administration must provoke in the unabashed Putin critic and CIA booster today.

One thing that will always stay timeless, though, is the collection of chef’s recipes that populate these pages—nearly one for each of the 30+ chapters. While I’ve focused on doing Russian recipes in the first two novels, I thought I’d try out this one from a nearby nation: 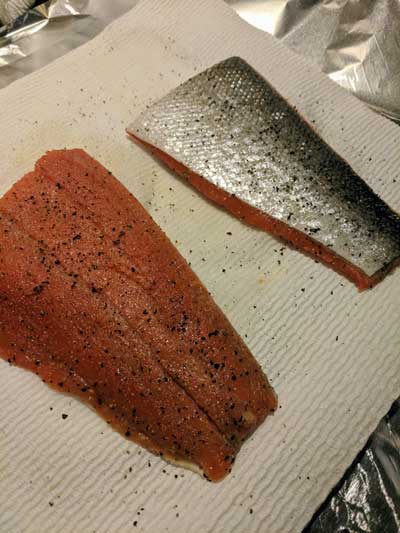 Place fillet, skin side down, on aluminum foil. Separately mix butter, dill, garlic, lemon juice, and white wine. Spread compound butter over the top of the salmon fillet, and crimp the foil into a loose tented packet.

Bake in a medium-high oven until fillet is cooked through. 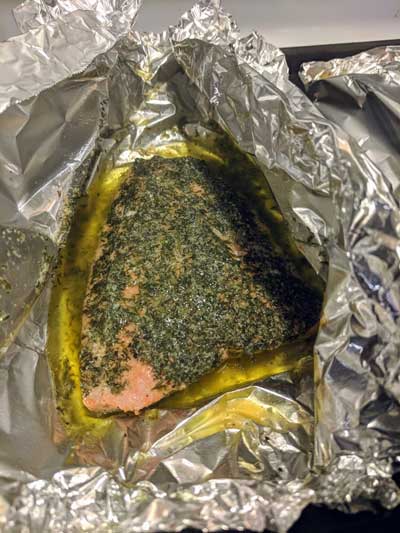 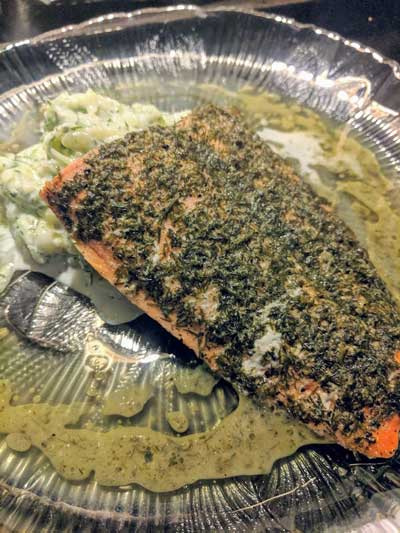 *I used two salmon fillets for this recipe, and decided to make an overabundance of the compound butter, combining the ingredients below and refrigerating the mixture to set: 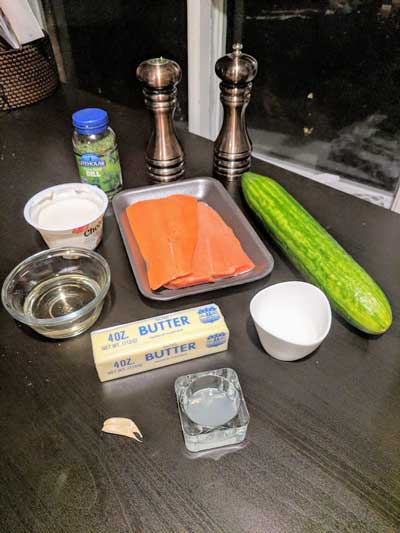 I spread the compound butter very generously over the fillets, and could probably have used a lighter hand when seasoning the salmon, as the end result came out a little saltier than I enjoyed. I also tend to prefer a slightly more rare salmon, so I baked these for only 15 minutes at 375°F. 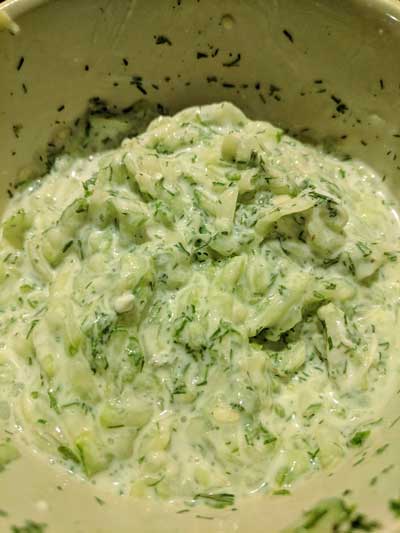 After grating the cucumber, I salted it and set it aside to drain in a colander while I prepared the fish and butter. I then found, to my chagrin, that I’d run out of regular Greek yogurt, so I wound up carefully scooping the tops of my kids’ fruit-at-the-bottom Greek yogurts for this recipe. The hint of strawberry in the dressing actually lent a surprisingly fresh sweetness to the salad, enough so that I felt safe eschewing the addition of sugar from the original recipe.

On their own, the salad and salmon were perfectly adequate, but combining the two actually made for a truly remarkable flavor reminiscent of the Central and Eastern European fondness for salted fish with cool, creamy dressings. My lovely assistant Karin particularly enjoyed this dish (and before I forget, a huge shout out to my mother-in-law for telling me that these spy novels had recipes included. I would never have thought it).

Next week, we stay very close to my heart and home, making comfort food from nearby here in Maryland. Do join me!