Cooking the Books: The Alchemist’s Illusion by Gigi Pandian 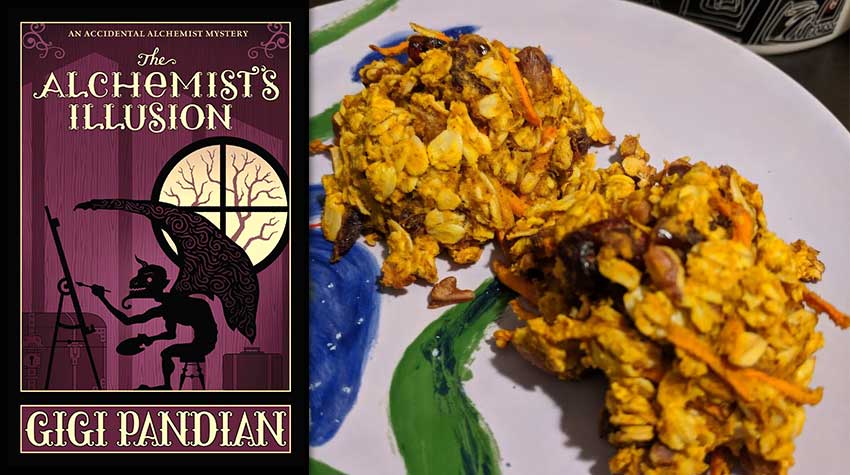 I do love me a paranormal culinary cozy, and The Alchemist’s Illusion absolutely lives up to my high expectations! Despite not having read the first three books in the series (something I’m hoping to remedy in the near future, as I enjoyed this so much I just bought them all), I felt quickly comfortable with the milieu—a modern-day Portland, Oregon, where centuries-old alchemist Zoe Faust is trying to live a relatively normal, incognito life. Granted, having a living gargoyle named Dorian as her roommate and best friend would hardly seem congenial to such aims regardless of how charming he can be, but the supernatural duo manages to establish themselves quite well in the fabric of city life. More importantly, they’re both happy to focus on the future as they continue to build fulfilling lives in their new hometown.

But then, Zoe sees the familiar face of her former mentor staring out at her from a portrait displayed in an art gallery window, and the past comes rushing back with a vengeance. Nicolas Flamel and his wife, Perenelle, disappeared from Zoe’s life a long time ago, but the lifelike portrait she’s just seen has Zoe wondering whether Nicolas went willingly and was not, in fact, imprisoned in paint. She tries to ask the gallerist for information about the artist, only to find herself accused of the murder of Logan Magnus, the local painter who recently committed suicide by eating his own toxic paints. As she continues to investigate the provenance of the painting, she finds herself in the crosshairs of a murderer who has been killing for a disturbingly long time.

The present-day narrative is interspersed with chapters from the life of Philippe Hayden, an artist in Rudolf II’s late 16th-century Bohemian court. An alchemist like Zoe and Nicolas, Philippe has discovered a transformative style of painting but is not the only one aware of the process. The way that Philippe’s story intersects with Zoe’s is both entertaining and absorbing, and I was totally kicking myself for not having figured out whodunit sooner. I also really enjoyed getting to know Zoe’s friends and the people she calls family, especially as new characters are introduced.

The book included three vegan recipes, which I must admit that my lovely assistant Karin was far more enthusiastic about than I was. We decided to try the most complicated of the bunch: 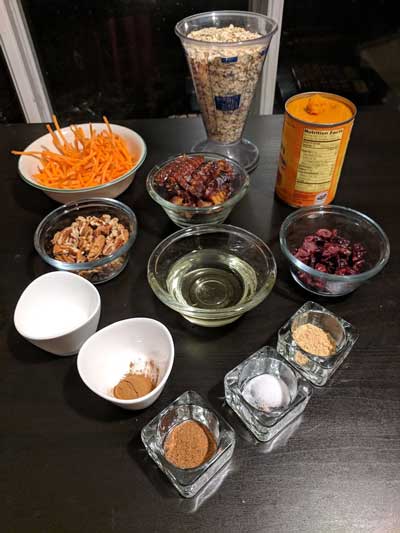 Advance prep: Bake a large sweet potato ahead of time (1 hour at 400), if you want to use fresh sweet potato instead of canned pumpkin. If your dates are too hard to work with, place in a shallow bowl and soak them in hot water for 10 minutes.

Preheat oven to 350 and prepare a large baking pan with parchment paper. In a large bowl, mix the oats, sweet potato (or pumpkin), carrots, coconut oil, and spices. Combine well, using a fork or your fingers. Stir in the pecans and raisins. 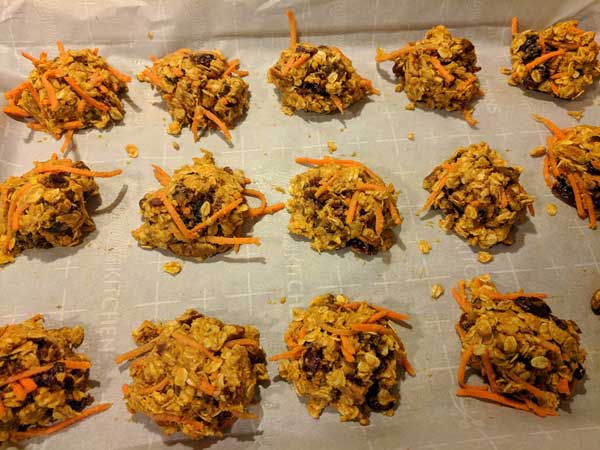 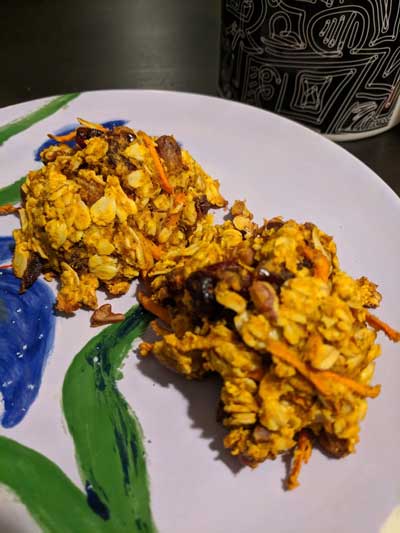 The above was the recipe included in advance reader copies, accompanied by a delightful note that Dorian was working on making these cookies easier to transport, with a final recipe to come in the completed novel. I must agree that these cookies fell apart quite quickly, though the taste was spot on for a carrot cake breakfast bar, which I think is a more apt term than cookie. I used pumpkin and cranberries and should probably have used grated carrot instead of the matchstick kind. The end result wasn’t terribly pretty, and I’m still not sure why baking powder was used in this dish, but the flavors were absolutely there. My kids liked them enough that all the cookies were gone in just a few days, so that’s a plus. This is definitely a healthier treat than most!

Next week, we make less healthy but just as delicious snacks while investigating murder in the South. Do join me!

See also: Cooking the Books: Hooks Can Be Deceiving by Betty Hechtman