Hollywood has come to Savannah, Georgia, making for hectic days at the Honeybee Bakery. Part-owner and former fire department chief Ben Eagel has been hired to provide security on the movie set that has shut down parts of the city. His niece and our heroine, Katie Lightfoot, is helping cover for him at the bakery when the film’s production coordinator, Simon Knapp, comes in asking whether the bakery can cater lunches. Apparently, the company they hired for craft services is doing a pretty poor job, both in food quality and in punctuality. Katie and her Aunt Lucy agree to cater for that day and the next, with a view to perhaps finishing out the rest of the week, when Simon is found murdered.

At first, Katie wants nothing to do with the investigation, but her deceased Nonna once again persuades her otherwise—this time through the intervention of a psychic attached to the set. The psychic also brings her startling news about Franklin Taite, the police detective who originally told her she was a lightwitch. And even more shocking revelations come to light about her boyfriend Declan’s history during a seance to find the killer.

I really enjoyed how well Bailey Cates integrated all the developments in Katie’s life, even as Katie races to stop a desperate killer from striking again. The gossip and intrigue on the movie set were also really interesting and complex without being absurd. The integration of witchery was also nicely done.

Once again, though, this book has me wondering why Katie bothers with Declan when she has a clear affinity for other men—and not just yummy Steve, but total strangers! I’m starting to believe Ms. Cates is setting us up for some sort of tragedy when it comes to Declan … not that I’m necessarily hoping for it myself. Necessarily.

Anyway, this week’s treat is a stellar coffee cake, flavored with lemon and sour cream: 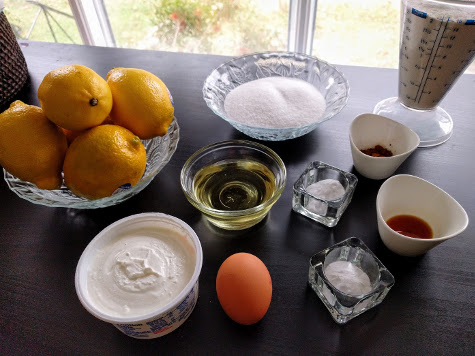 5 teaspoons freshly grated lemon peel (be sure to avoid the white pith of the lemon, which is bitter)

Stir together flour, sugar, lemon peel, and cinnamon in a large bowl.

Add the oil and lemon juice, mixing until evenly moist and small clumps form. Set aside one cup for the crumble topping, leaving the rest in the bowl. Add sour cream mixture to flour mixture all at once and beat with an electric mixer until the batter is smooth.

Spread the batter in the prepared pan, and sprinkle the reserved crumble topping evenly over the top.

Bake 40 minutes or until a toothpick comes out clean. Transfer the pan to a rack to cool.

Sprinkle with confectioners’ sugar, cut into squares, and serve. Can be made one day ahead. I had to bake it a little longer in order to get the desired doneness, but it came out of superb bakery quality. I could definitely see myself buying and enjoying this in a store. I’d never actually baked a cake with a crumble topping before, and I was at first hesitant to add the dusting of confectioner’s sugar, but it came out really well!

I also thought, at first, that it could use a stronger lemon flavor, but I think the cold I had was affecting my sense of taste. Both the opinions of my test eaters as well as the evidence of my own tastebuds a day later made it clear that the flavor was nicely balanced, if a little more subtle than I was used to in a lemon cake.

Next week, I finish out the series (given that I started with the last first) with a stab at one of my favorite breads. Do join me!