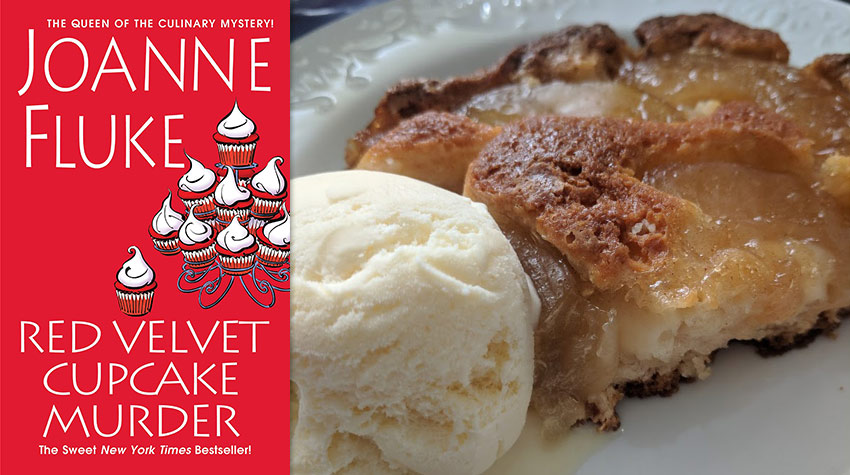 Yay, it’s time to head back to Lake Eden to catch up with Hannah Swensen and her friends and family! I’m not the only one with that idea, though, as the duplicitous Doctor Bev is also back to torment Hannah and, worse still, sweet, dear Norman, who twice made the mistake of being engaged to his fellow dentist. Not that she has much interest in resuming her professional career; instead, she’s sunk her hooks into the richest man in town, Roger Dalworth.

Roger has just renovated the Albion Hotel into a building of luxury condos, with the penthouse being an especially glamorous showpiece. He’s tasked Hannah’s sister, real estate agent Andrea, with setting up and selling the units. To that end, they’re throwing a party that also doubles as an open house for the swanky complex. Hannah is catering red velvet cupcakes for the event while trying to avoid the poisonously sweet Doctor Bev, who has no qualms showing off the enormous engagement ring Roger has given her.

Regardless, the party is going swingingly until screams and a crash interrupt the festivities. Barbara Donnelly, the beloved sheriff’s department secretary, has fallen headlong from the roof! The sheriff’s department—including Andrea’s husband, Bill, and Hannah’s one boyfriend Mike—is all over the case, especially when it looks like Barbara jumped off the roof to escape a violent attack. And while everyone—assailant excluded—is relieved that Barbara has survived her ordeal, the case is stalled by the fact that Barbara’s memory has been severely affected by the trauma.

No one can figure out who could possibly have it in for someone as harmless and kind as Barbara. But when Hannah later discovers Doctor Bev’s car sinking into Miller’s Pond with an unconscious Doctor Bev inside, the list for who could want the unpopular dentist dead is substantially longer. And then, Hannah herself is accused of Doctor Bev’s murder, and things get really wild.

I’m not going to lie: I thought it was pretty obvious who had done it and why, but I sure as shooting enjoyed hanging out with Hannah and her crew as they figured it out for themselves. It’s always so satisfying spending time in Lake Eden with these vividly drawn characters, especially since this installment of the series has Hannah in the new and uncomfortable position of having to prove her innocence. I also liked that the unsolved mystery from the previous novel is fully sorted out here, as that had been really bugging me!

Red Velvet Cupcake Murder includes over 17 recipes, and after some deliberation, I settled on making this one:

Preheat oven to 375 degrees F., rack in the middle position. 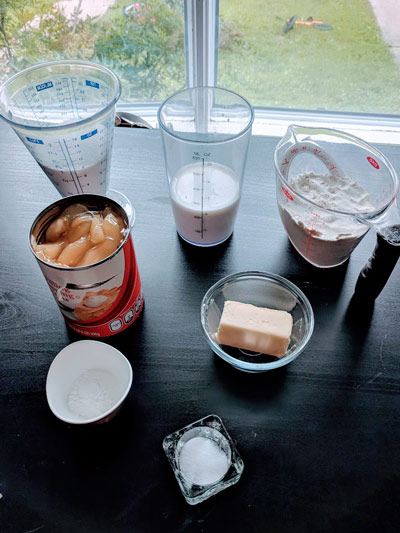 1 can fruit pie filling (approximately 21 ounces by weight–3 to 3 and ½ cups, the kind that makes an 8-inch pie)

Place the butter in a 9-inch by 13-inch cake pan and put it in the oven to melt. Meanwhile…

Mix the milk, sugar, flour, baking powder and salt together in a medium-size bowl. This batter will a little lumpy and that’s okay. Just like brownie batter, don’t over-mix it.

Using oven mitts or potholders, remove the pan with the melted butter from the oven. Pour in the batter and tip the pan around to cover the whole bottom. Then set it on a cold stove burner.

Spoon the pie filling over the top of the batter, but DO NOT MIX IN. Just spoon it on as evenly as you can. (The batter will puff up around it in the oven and look gorgeous!)

Bake the dessert at 375 degrees F., for 45 minutes to 1 hour, or until it turns golden brown and bubbly on top. 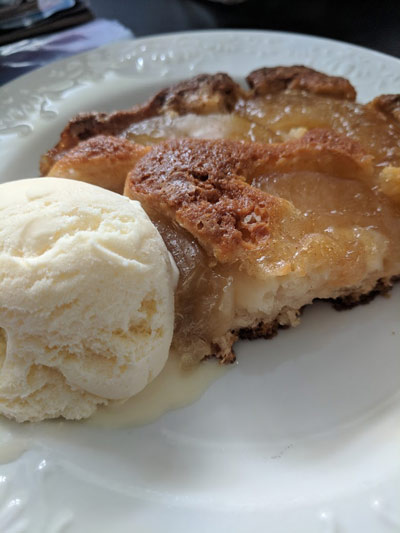 To be technical about it, I believe this kind of dessert is actually called a buckle. It is super easy to make, though, especially with the prepared filling taking out a large chunk of the work. I used spiced apple as my filling, which was quite a tasty choice, though I’m thinking that peach would have been extra delicious. As it was, it reminded me of a very simplified apfelkuchen. The beauty of this recipe, of course, is that you can substitute any pie filling for a delicious treat. The ice cream was a nice touch, too, and one I’d highly recommend.

Next week, we get to stay in Lake Eden but try out a savory dish instead. Do join me!

See also: Cooking the Books: A Soufflé of Suspicion by Daryl Wood Gerber