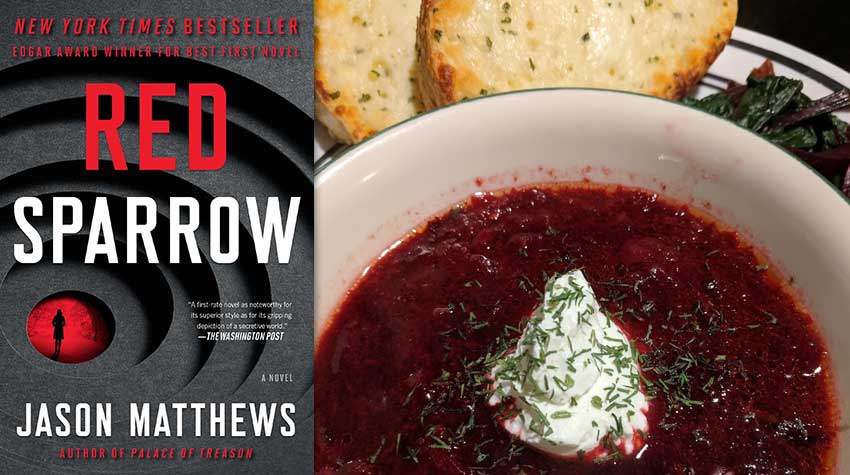 I did not watch the recent film based on this book because most popular ballet-related movies make me violently angry. To be fair, I also scoffed at certain of the ballet “details” included here in the novel proper; pop culture in general just has a bad habit of stereotyping ballerinas as hyper-disciplined psychopaths-in-training. That aside, this spy thriller was a lot better than I expected. It’s full of twists and thrills and, perhaps most surprisingly of all, recipes!

But before we get to those, let’s talk about the story. Red Sparrow tells the tale of Dominika Egorova, a star ballerina and loyal Russian citizen whose dance career is cut short by the perfidy of her classmates at the academy. Soon after, her father passes away, jeopardizing her ailing mother’s residence in the Moscow apartment where Dominika grew up. When her Uncle Vanya comes calling and offers her a job, Dominika feels like she has no option other than to accept.

Vanya Egorov is a bigshot in the SVR, the Foreign Intelligence Service, answerable to President Vladimir Putin himself, and he needs to take care of a problem with as little official oversight as possible. Towards this end, he involves his own niece in the brutal, off-the-books slaying of one of Putin’s domestic enemies. But Dominika is no mere pawn. She quickly parlays her unwitting role into a bargaining chip: let her train with the SVR as a real spy, and she’ll keep quiet about what she knows. Vanya grudgingly accepts, and soon Dominika is one of the few female operatives in SVR history who isn’t just a graduate of their infamous Sparrow school—though she does find herself having to undergo that course of sexpionage as well (hence the title).

Elsewhere in Moscow, a young CIA officer named Nate Nash is handling a high-level Russian official who has been feeding information to the Americans for nearly 15 years. The Russians know they have a mole and that Nate is his connection, but they have no idea who the traitor could possibly be. The SVR sets Dominika on Nate’s trail, starting a cat-and-mouse game that will test loyalties and cost lives.

I truly enjoyed this tale of spycraft and double crosses, even if there were parts that made me raise a skeptical eyebrow. I was actually very surprised with how convincingly the love story between Dominika and Nate unfolded, however. And I very much appreciated how each chapter but the last ended with a recipe for food described in the preceding pages—a total of 41 recipes.

Now, I must warn you that these aren’t as detailed as the recipes we usually cover for this column. Never fear though: I did my best to figure out the most adequate measurements for readers trying this at home:

Melt butter in a large pot; add a chopped onion and saute until translucent; stir in three grated beets and one chopped tomato. Pour in beef stock, vinegar, sugar, salt, and pepper. Broth should be tart and sweet. Bring to a boil, then simmer for an hour. Serve hot with a dollop of sour cream and chopped dill.

*Below is the list of ingredients I used for this soup, though of course, the intent of the recipe above is for the home cook to put their own stamp on the dish by altering to taste. 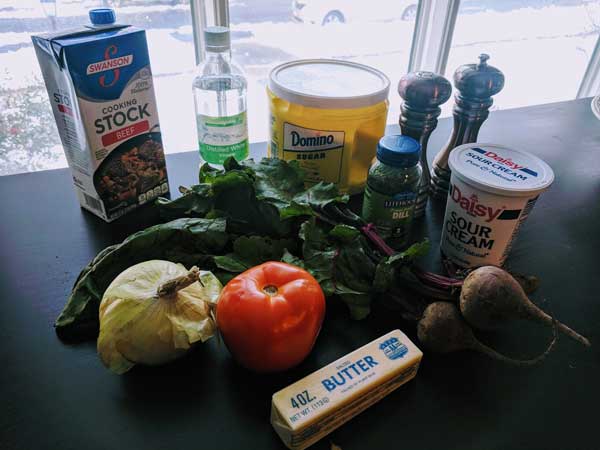 Sour cream and dill to taste 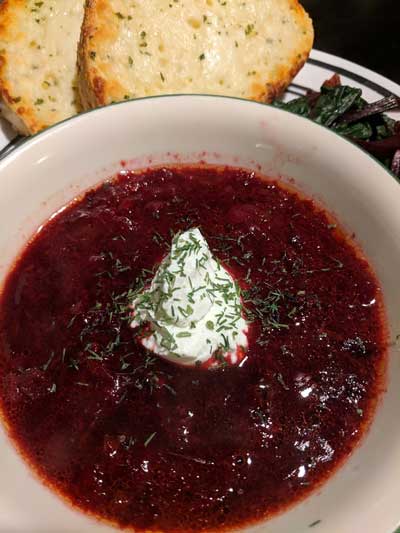 Though I’ve only had borscht once—in a quite authentic Russian restaurant here in Washington, D.C.—I think I did a good job approximating that sweet and sour flavor with this recipe. I also kept the beet greens to saute in butter as a delicious, mild side, and I enjoyed both soup and greens with some Texas Toast—to bring some patriotism to the plate. This recipe serves four, and leftovers keep quite nicely in the fridge for a few days. Grating beets is not the most fun kitchen activity, but I would definitely consider making this again—especially if there’s a Russophile around that I want to impress.

Next week, we head back States-side to drink wine, solve murders, and make candy. Do join me!