Cooking the Books: Murder with Macaroni and Cheese by A. L. Herbert 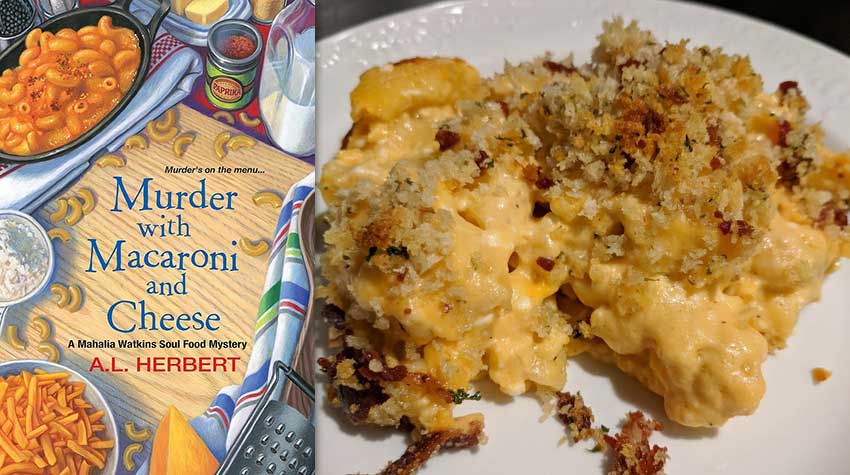 The second in the Mahalia Watkins mystery series sees us back in Prince George’s County, Maryland, as our heroine faces down one of the worst milestones in anyone’s life: the high school reunion. Halia isn’t even interested in going, as she’s only stayed in touch with one person from her old school. But when Raynell Rollins comes knocking on her door, it’s hard for Halia to say no.

Raynell was queen of the mean girls in high school, and not a lot has changed in the years since. Nowadays, she’s a high-flying real estate agent married to a former professional football player and is hellbent on making a success of the reunion. To that end, she’s recruiting Halia to cater the affair. Halia is reluctant to help someone who’s obviously still as much of a bully as she was all those years ago, but she’s persuaded by the intercession of the much kinder Alvetta Marshall. Alvetta and Raynell have been best friends for decades, but little of Raynell’s harshness has rubbed off on her much more beautiful friend, who is now married to a megachurch pastor.

Halia actually finds herself pleasantly surprised by how well the reunion goes, even with the “assistance” of her sassy younger cousin, Wavonne. She’s less pleased with the run-around she’s getting from Raynell regarding payment, so she decides to make a house call the following morning to pick up her check. She and Wavonne find more than they expect, though, when they stumble across Raynell’s dead body.

Having learned her lesson from her last experience finding a corpse, Halia immediately calls the cops. They believe it looks like an accident, but Halia has been around Raynell long enough to suspect foul play. Her investigations will uncover a tangled mess of secrets and lies, and worse, according to her mother, it will jeopardize the love life that the reunion seemed to have resuscitated.

This was another charming installment in this local-to-me series! As with her first book, A. L. Herbert does a great job constructing her mystery, but she really lets her inner restaurant geek shine in this one. Aside from the fun insights into the restaurant business, there are also five new recipes included here. I decided to try the titular one: 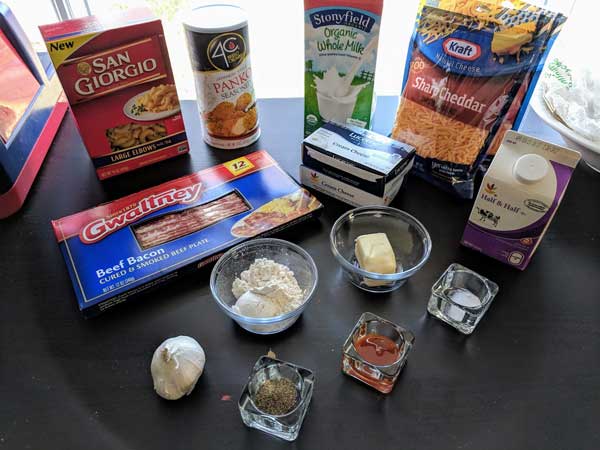 Boil pasta with a pinch of salt for 7 minutes, or according to package directions. Drain. Set aside.

Fry bacon in a large frying pan until crispy. Remove bacon from pan, blot with paper towels, and chop into thin strips. Set aside.

Remove pan from heat and drain sauce through sieve (to remove any lumps) into large glass or metal bowl. Add cheddar and cream cheese. Stir until sauce is smooth.

Mix bread crumbs with butter and chopped bacon and sprinkle over macaroni and cheese.

Bake until bread crumbs are crispy, about 30 minutes. 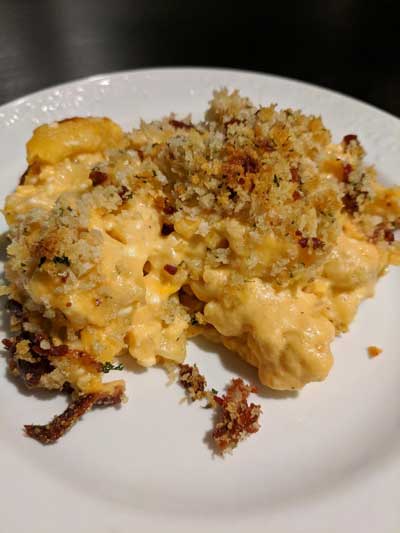 This was easily the best macaroni and cheese I’ve ever had, much less made! With three small children, I’ve put together more than my fair share of stovetop mac and cheese, but this was my first experiment with baked. It is definitely a far superior, if more involved, preparation method than stovetop. I was a little concerned that the addition of hot-pepper sauce to this dish would render it too spicy for my lovely assistant Karin, but she and I were pleasantly surprised by how this recipe suffused the pasta with flavor without an appreciable increase in heat. And while I know that baked macaroni and cheese is supposed to be a side, it was definitely good enough to eat on its own.

Next week, we close out the series with a delicious cake choice that might surprise long-time readers given my oft-stated preferences. Do join me!

See also: Cooking the Books: Murder with Fried Chicken and Waffles by A. L. Herbert