Cooking the Books: Murder on Cape Cod by Maddie Day 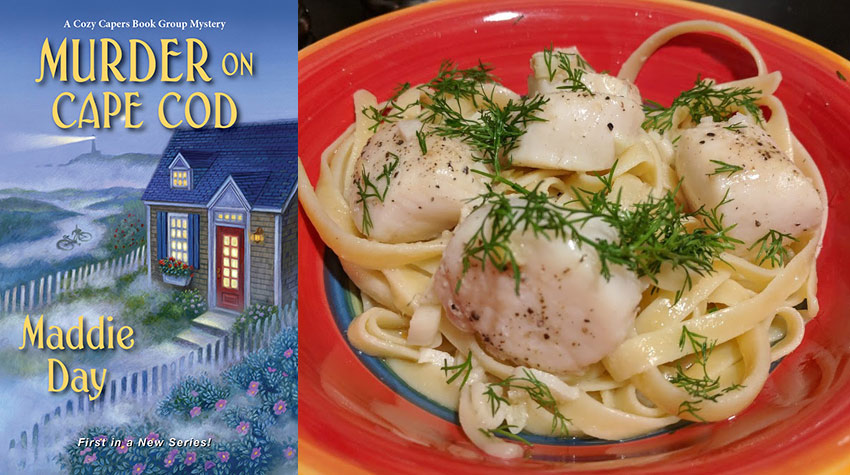 Hurray, I was so pleased to hear that Edith Maxwell, author of one of my favorite historical mystery series, was coming out with a culinary cozy series as well. Written under the pseudonym Maddie Day, this debut novel is quite a treat!

Mackenzie “Mac” Almeida is the mixed-race daughter of a Unitarian minister and his astrologer wife. She lives in a delightfully compact home behind the bicycle rental and repair shop she owns in Westham, a seaside town in Cape Cod, Massachusetts. She has a wonderful boyfriend, an adorable parrot, and a weekly book club dedicated to enjoying cozy mysteries. She is literally living the (my) dream.

But then, she stumbles across a corpse as she’s walking home from book club one night. The dead man, Jake Lacey, had blown her off earlier in the day when she’d asked him to fix the half-hearted repair job he’d done on her roof. Now, he’s lying dead on a biking/walking trail with a disturbingly familiar-looking knife sticking out of his neck. Mac doesn’t want to believe that the knife belongs to her half-brother Derrick, but when he skips out on both her and the beloved four-year-old he’s raising as a single father, she knows that something is terribly wrong. When her book club decides to start investigating shortly thereafter, Mac can hardly refuse to get involved, even when it places her in harm’s way.

I loved how charmingly metatextual this novel was, as Mac and her book club drily note their resemblance or otherwise to the heroes and situations they enjoy reading about themselves. I also greatly enjoyed how plugged in Murder on Cape Cod felt, particularly in terms of real people using technology on a day-to-day basis. It’s always a little weird to me when 30-year-olds in a supposedly modern setting don’t automatically default to texting each other, or worse, don’t even know how to text; this book absolutely got that right. It was also refreshing to enjoy such a diverse cast of characters. I’m a big fan of Tim, Mac’s boyfriend, who is a total dreamboat inside and out.

Murder on Cape Cod included four recipes, and I absolutely had to try Dreamboat Tim’s contribution to dinner one night: 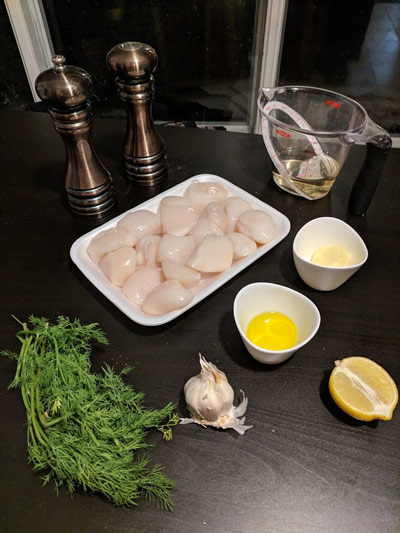 Juice of half a lemon

Pat scallops dry with paper towels. Season one side with salt and pepper. 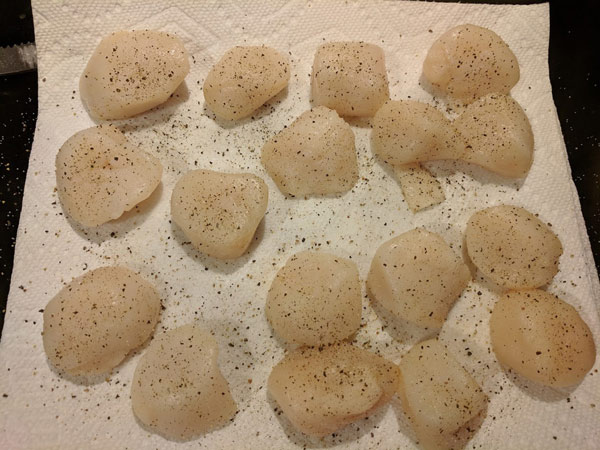 Heat oil and butter in a wide skillet on medium-high heat until butter foams. Lay scallops seasoned side down in skillet and let sear without touching for two minutes. Turn and add the garlic. 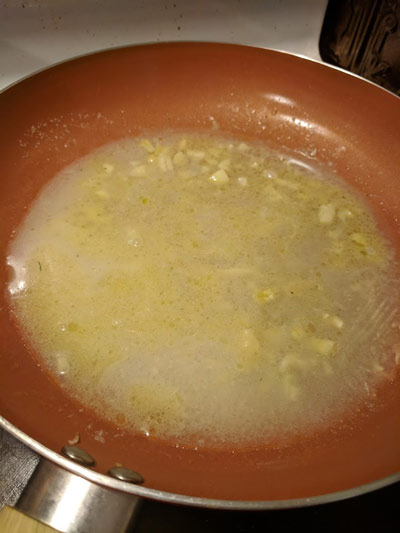 Cook another minute and a half. Sprinkle with lemon juice and remove to a warm platter. Add wine and de-glaze the pan until the sauce thickens. Serve over scallops with a sprinkle of dill. Serve on a bed of buttered pasta, over brown rice, or next to buttered, herbed potatoes. 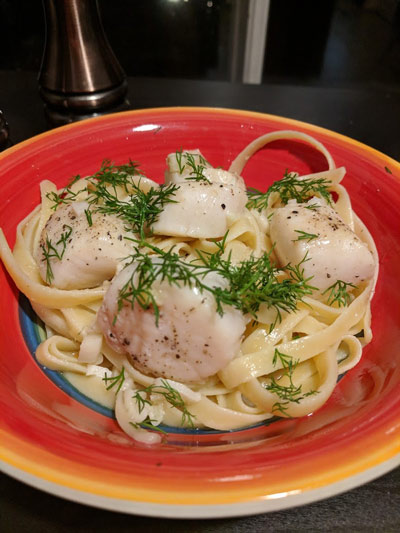 I’ve never really cooked scallops, though I have very distinct ideas about what a good scallop should taste like. I like a warm, soft center, and were I better capable of following cooking directions, I’m sure these would have come out closer to that ideal than they did. Since I abhor a cold scallop, I left these on the skillet for maybe a minute or two longer than I should have. They were still quite tasty and soft, but I do feel that I cooked them a little longer than optimal.

I did very much enjoy the sauce, though. I chose to serve these scallops with buttered fettuccine and the result was absolutely divine. With the dill on top, it felt very restaurant-quality, scallop texture notwithstanding (my lovely assistant Karin thinks I’m being too hard on myself but see Very Distinct Ideas mentioned previously). Of course, I used a little more garlic than was required, as is my wont. Overall, this was a quick, simple but very tasty way to prepare the seafood that I’ll definitely keep experimenting with.

Next week, we travel to the Midwest to begin a run of sweet treats with a decadent breakfast concoction. Do join me!