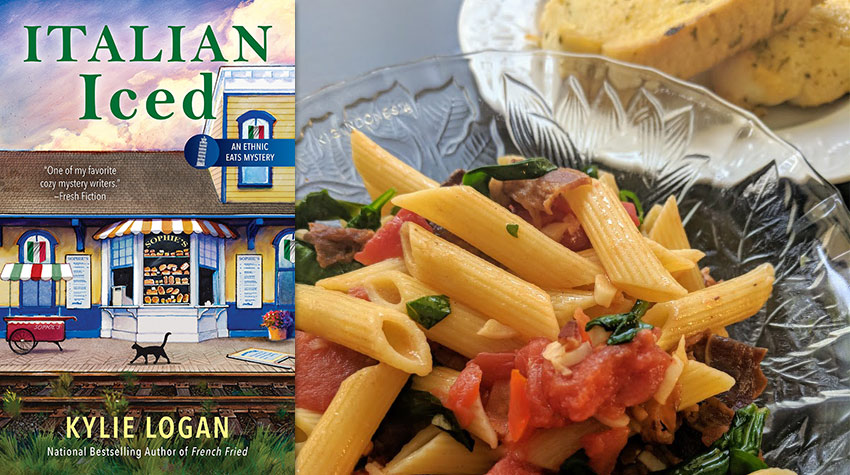 Laurel Inwood is settling fully into her new life as the head chef of the small-town restaurant, Terminal at the Tracks, owned by her adoptive Aunt Sophie. Now that she owns Pacifique, the small farm where she’s growing fresh produce, she’s feeling pretty fulfilled professionally as she’s able to source quality ingredients for the ethnic foods she features on Terminal’s menu. And she’s very much enjoying her romantic relationship with attorney Declan Fury, though he keeps talking about getting married, and she keeps edging away from the issue. As a former foster child who often bounced from one unhappy home to another, she’s leery of the institution of marriage.

Romantic problems aside, things are looking pretty great for most of Hubbard, Ohio’s residents! That is until the corpse of Laurel’s former boss, Hollywood superstar Meghan Cohan, is found dead in Terminal’s walk-in freezer.

It isn’t a secret that Meghan fired Laurel after wrongly accusing her of leaking private information to the press, nor is it a secret that Meghan subsequently blackballed Laurel from finding work as a personal chef among her celebrity friends. But it’s been over a year, and Laurel is totally over it. So what on earth is Meghan doing incognito in the small town where Laurel has happily settled?

As Laurel investigates, she discovers that a lot of the people she thought she had left behind in Hollywood have also descended upon Hubbard. But who among them would have had a reason to murder Laurel? Or could the killer be someone who lives closer to home?

Italian Iced is another fun addition to the Ethnic Eats series. It wraps up several plotlines from the first few books in an entirely satisfying manner. Laurel’s background is never anything less than convincing, and I especially enjoyed how it helped her reach out to Spencer, Meghan’s much-neglected son. I also liked how George had more to say in this installment—the laconic chef is one of my favorite characters.

There were two recipes included in this volume, and since my lovely assistant Karin is sensitive to spiciness, I decided against the “Fra Diavolo” to try out this one instead:

Penne with Bacon, Tomatoes, and Spinach 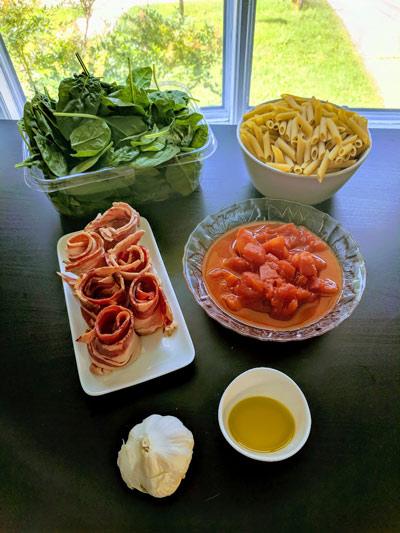 While your penne is cooking according to package directions, heat 1 tablespoon of olive oil in a skillet over medium heat. Place bacon in the skillet and cook until browned and crisp. Add garlic and cook for about 1 minute. Stir in the tomatoes and cook until heated through.

Place the spinach into a colander and drain the hot pasta over it so it is wilted. Transfer to a large serving bowl and toss with the remaining olive oil and the bacon-and-tomato mixture. 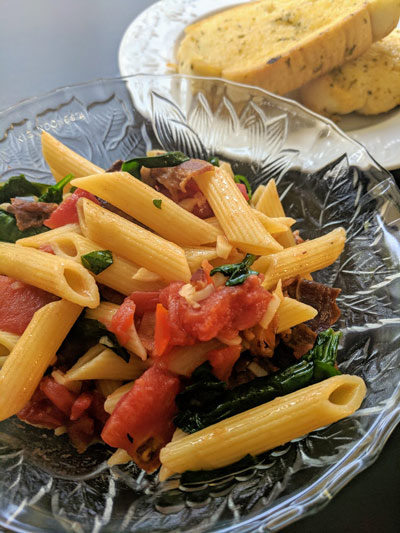 I love this method of cooking spinach—the greens are so bright and tender afterward! I was also a big fan of the generous amount of garlic included here. I only crumbled the bacon after cooking instead of chopping it up beforehand, but I don’t think that affected the quality at all. I did like that there was no additional salt needed because of the bacon. I think this would have benefited from a little pepper or the addition of green herbs, but it was a good basic dish—though certainly not to the level of the French cassoulet described in the preceding of the Ethnic Eats series, which is still one of my all-time favorite meals.

Next week, we bounce back to the West Coast to try a very French dessert. Do join me!

See also: Cooking the Books: Till Death Do Us Tart by Ellie Alexander