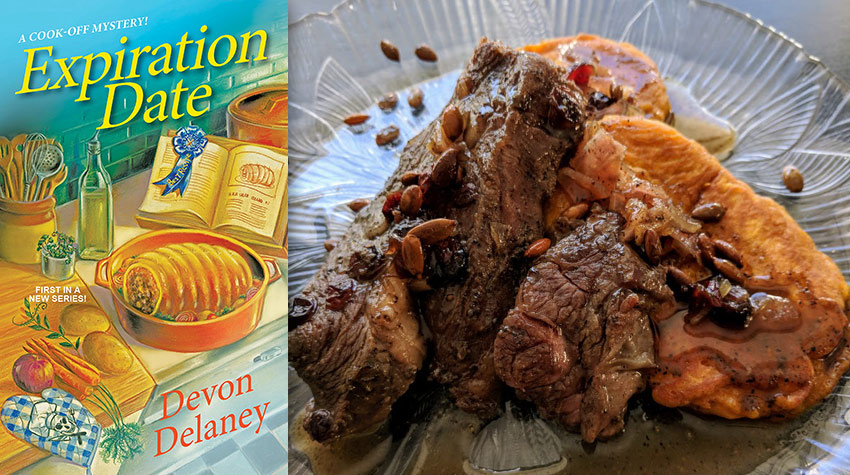 Sherry Frazelle is licking her wounds as she finalizes her divorce from her husband of five years and the loss of her job as his legal assistant. Now, she works part-time at her dad’s rug store and spends her free time whipping up entries for the cooking competitions she’s becoming quite famous for winning—at least in her hometown of Augustin, Connecticut.

Augustin is also the headquarters of the OrgaNicks Corporation, an organic foods manufacturer that is sponsoring the latest cook-off that Sherry has entered. The six finalists—flown in from all over the United States—are cooking for three renowned local chefs. Just as Chef Anthony Birns is about to announce the winner, however, he falls down dead, the apparent victim of deliberate poisoning. Worse still, the autopsy shows that Sherry’s dish was the last one he ingested before dying.

Sherry is understandably distraught at being painted as a murderer and sets out to clear her name. But warnings start to pile up on her doorstep, escalating in their menace, and Sherry soon finds herself the target of the real killer as she uncovers unsavory secrets about nearly everyone involved with the cook-off. This culminates in a banquet that is half-macabre, half-screwball-comedy as a murderer is unmasked and a winner is finally declared.

Expiration Date features a heroine who defies the conventions of culinary cozies in a way that is quite refreshing. Sherry suffers from anxiety and deals with it as practically as she can. I also really enjoyed the way romance was treated in this book. Sherry’s final admonishment to her would-be suitor was quite Austen-like. I’m intrigued by where Sherry’s heart might take her in future novels.

I was also fascinated by Devon Delaney’s insights into the world of competitive cooking. I used to binge watch Top Chef, so getting the behind-the-scenes scoop for smaller, less glamorous competitions was quite the eye-opener. It was fun, as well, to figure out the sly puns in a book chock-full of dad jokes and food similes.

There were four recipes included in this novel, and I admit to some disappointment that none of them had anything to do with the many, many delicious dishes described in the course of Sherry’s sleuthing. However, I quickly got over that once I’d made the following: 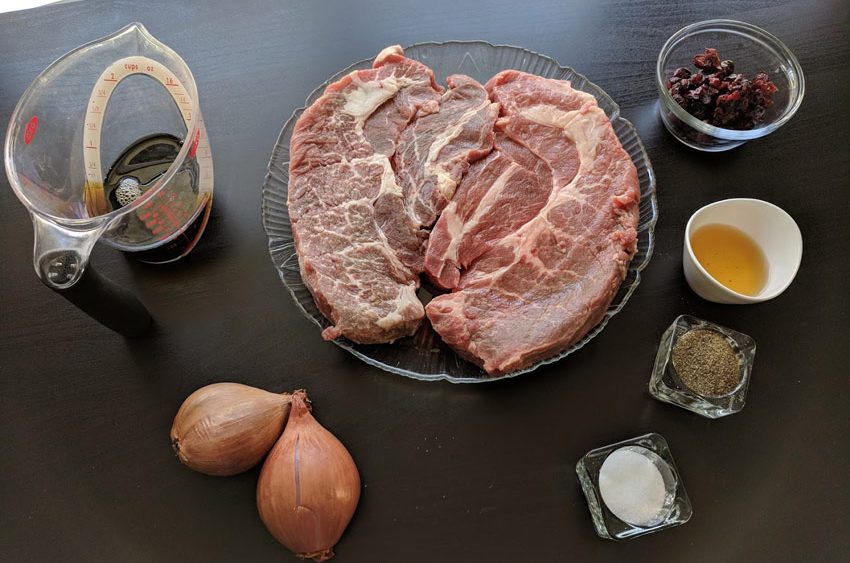 For the pumpkin pancakes:

1 tablespoon unsalted butter, plus more if needed when cooking pancakes

Combine the salt and pepper and rub seasoning over both sides of steaks. Heat a large nonstick skillet over medium heat and add the steaks to the skillet. Cook steaks 8-10 minutes, flipping once until desired doneness.

Remove steak to a plate, and maintaining skillet heat, sauté shallots for 1 minute then add maple syrup, vinegar, and cranberries to the skillet.

Bring skillet contents to a low boil and simmer until thickening begins.

Add the steak back to the skillet and continue simmering until steak is lightly coated with peppered maple sauce, 1-2 minutes. Remove skillet from heat and let it rest. 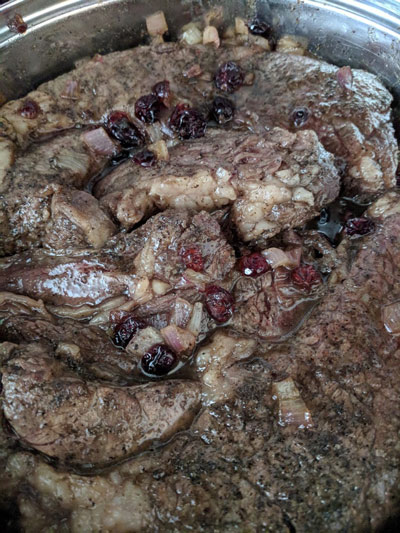 Meanwhile, prepare pumpkin pancakes by combining pumpkin, pancake mix, buttermilk, and nutmeg in a bowl. Heat 1 tablespoon butter in a large nonstick skillet over medium heat. Working in batches, spoon the batter into the skillet to form each of eight pancakes and flip when lightly browned and bubbly on one side, adding more butter when needed with each batch. Cook until set and remove pancakes to a plate.

Assemble each serving by giving each of 4-6 dinner plates 1-2 pancakes. Cut steaks into strips and top each pancake with 4 steak strips and sauce, and sprinkle with toasted pumpkin seeds. 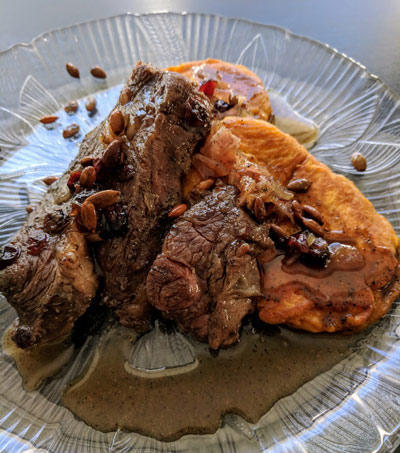 Be warned: this is not a dish for the faint of palate. While my lovely assistant Karin was quite prepared to be overwhelmed by the pepper, I certainly did not expect the flavor to be quite so bold. Which is not at all a criticism of this excellent steak dish. The pepper flavor, though strong, melds quite beautifully with the maple and pumpkin, and by the end of the meal, all three had achieved a harmonious balance on the tongue. The pumpkin pancakes are an inspired and wholly original accompaniment to the steak, with the cranberries and pumpkin seeds (I toasted mine at home) providing the perfect amount of brightness and crunch, respectively. I can see how Ms. Delaney wins so many competitions with recipes like these! I did find myself doubling the recipe for pancakes because my whole family wanted more to go with the steaks, but that was serendipitous, as I could use up all the pumpkin puree that came in the can.

Next week, we travel south and I make more cupcakes, teehee! Do join me!

See also: Cooking the Books: Shot In the Dark by Cleo Coyle