Cooking the Books: Eggs on Ice by Laura Childs 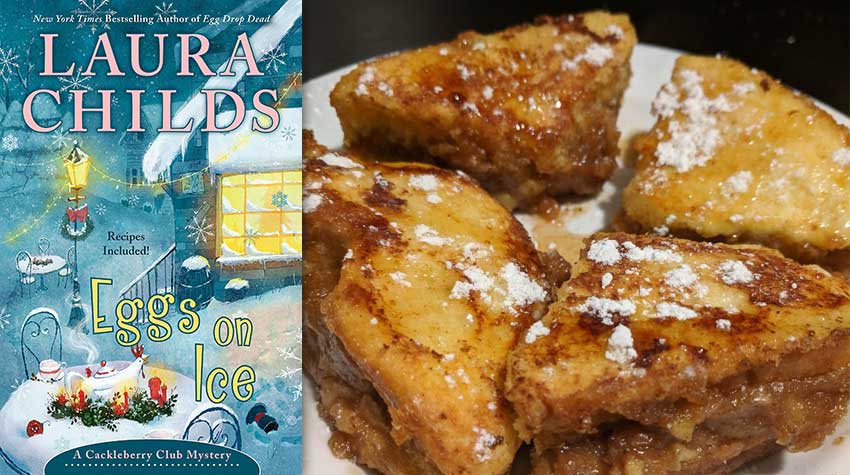 The Cackleberry Club Mystery series continues to delight with this very smart eighth installment. Suzanne Dietz is gearing up for the holiday season by volunteering as a stagehand for the town of Kindred’s production of A Christmas Carol, alongside one of her business partners, Toni. They’re fumbling their way through their first blocking rehearsal when a ghostly figure waltzes on stage and stabs their Scrooge. At first, the cast and crew think this is just an innovation on the classic play—until Suzanne realizes that the actor, Allan Sharp, is not playing dead.

Suzanne gives chase, but when the figure threatens her with the same hunting knife that killed Allan, she sensibly (for once) backs down. And that, she figures, is going to be the extent of her involvement in the case. Allan was an attorney with the kind of attitude that made plenty of enemies, so her good friend Sheriff Doogie has lots of leads to follow. But then, a young woman who shares a bad history with the deceased comes asking Suzanne for help, and before she knows it, Suzanne is investigating yet another murder.

I honestly did not see the ending coming—kudos to Laura Childs for some excellent misdirection and fine mystery writing. As always, it was a lot of fun hanging out with the three women who run the Cackleberry Club and get along marvelously despite their very different personalities. Along with the help that Suzanne extends to Amber—the young woman Allan had sexually harassed out of her job—it’s a great tale of female solidarity even in the face of death.

Eggs on Ice includes 11 terrific recipes, and I had a hard time deciding which to choose. I finally settled on this one, despite (or perhaps because of) my repeated slips of the tongue in calling it Elvish: 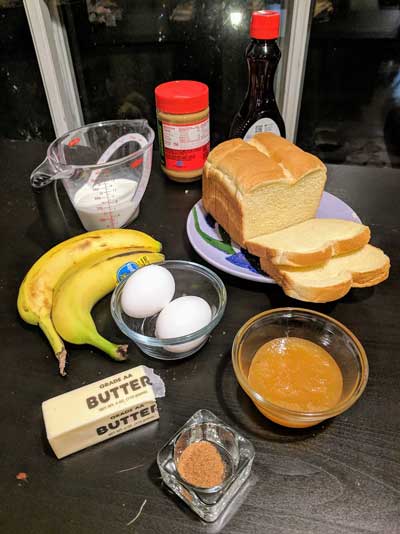 Mix together bananas, peanut butter, honey, and nutmeg. Spread mixture on 4 slices of bread, then top with the other 4 slices to create 4 sandwiches. Slice each sandwich into 4 triangles.

Mix together eggs and half-and-half. Place butter in skillet and heat. Dip each triangle into egg mixture and cook in skillet, turning when one side is golden brown (about 1 minute per side.)

Place 4 triangles on each of 4 plates. Serve with syrup and a sprinkle of powdered sugar. Yields 4 servings. 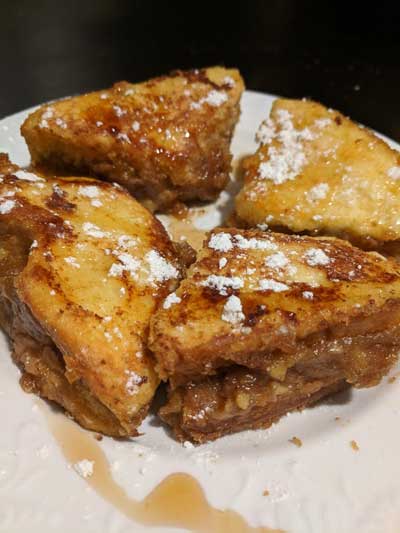 While I’m not ordinarily a big fan of peanut butter—I don’t hate it; it’s nice, but I don’t understand the rapture it occasionally receives—I do very much love a peanut butter and banana sandwich, and I was intrigued by the idea of adding honey and nutmeg to that mix. Plus, French toast is one of the most delightful things one can do with bread at breakfast.

But I must warn you: this recipe uses A LOT of peanut butter. Should I ever make this again, which is not unlikely, I’ll definitely use about half the recommended amount, as 2 cups just absolutely overpowers everything else in the dish, even the French toast bits. As it stands, I actually had to make an additional sandwich (with an additional egg) to use up all the filling. This, of course, resulted in a very hearty, rather heavy, definitely generous amount of food. The good news is that it reheats quite nicely in the microwave, so I got to enjoy it the next day as well.

I would also recommend using the syrup and/or powdered sugar liberally. I ordinarily eschew extra sweetness, but this dish absolutely benefited from it. I do lay the blame again on the overabundance of peanut butter in this dish, though if you’re a peanut butter fanatic, you’ll likely quite enjoy this recipe as is.

Next week, we travel way out west in order to experiment with a Chinese delicacy—and solve a murder, of course. Do join me!