Nick Charles has got to be the best crime-solving animal sidekick I’ve come across in ages. Here, in the 3rd installment of the Nick & Nora Mystery series (and yes, the name is a cute homage to the classic detective duo), the overweight cat is always on hand to help his owner Nora as she investigates a young woman’s disappearance at the behest of the woman’s wealthy aunt, Violet Crenshaw.

Violet also has another job for Nora: catering the local museum’s annual gala. Cruz, California might be a small town, but their museum boasts cachet enough to host an exhibit of items straight out of Arthurian legend from the catalog of a premier British collector. Since the unveiling of this exhibit will coincide with said annual gala, Nora’s menu is expected to reflect the Arthurian theme, presenting another layer of creative challenge.

There’s some concern over security, of course, as the items are valuable not only in themselves, but as historical artifacts—in fact, there was an attempted burglary the last time they were displayed in London. To prevent anything like this from happening on their watch, the Cruz museum has enlisted the aid of not only the local police department, but also various off-duty law enforcement agents—including both Nora’s current boyfriend, FBI Special Agent Daniel Corleone, and her not-exactly-ex-boyfriend Detective Leroy Samms from a neighboring department. Cue the awkward romantic situations and tensions.

And if that’s not enough excitement for the life of a crime reporter turned sandwich shop owner, mysterious postcards purporting to be from Nick’s former owner start showing up. Nick Atkins was a private investigator who disappeared while working a case, leaving his cat—formerly named Sherlock—to Nora’s care. The postcards are all oddly-worded assurances as to Atkins’s wellbeing and provide no comfort to Nora, who has never stopped trying to track him down.

When a woman is found murdered at the museum and Nora herself is targeted for violence, it takes all of Nick the cat’s ingenuity to help save his owner and solve the many mysteries. It’s pretty great how T.C. LoTempio makes Nick so compelling that you want to believe he’s smart enough to, for example, learn how to play chess, much less help his owner solve crimes. About the only thing he can’t do is cook!

For those of us with opposable thumbs, however, Ms. LoTempio has included two sandwich recipes. I chose to try the sub named after one of the best-looking actors in Hollywood: 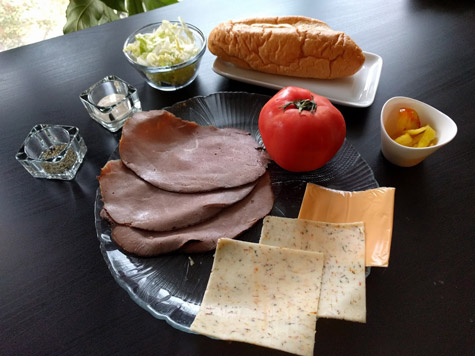 I wish Ms. LoTempio had been more precise with amounts in her recipe, as my first attempt (pictured) was visually attractive but rather difficult to eat and, quite frankly, not very balanced in flavor. It did give me an idea of how the sandwich should taste, though, so I was happy to take another stab at it a few days later. The sandwich was surprisingly mild the first time I tried it, despite the presence of horseradish dressing and hot and sweet peppers. As I do like spicy things, I wound up using pepperjack the second time around and found that a vast improvement. I’d definitely make this sandwich again, though I don’t quite understand the connection to Hugh Jackman himself.

I was also rather regretful that Ms. LoTempio hadn’t included any of the recipes she described when Nora was catering the Cruz Museum’s gala. Some of those dishes sounded really mouthwatering, especially the “Morgan Le Fay’s Pepper Steak Stir-Fry.”

Speaking of all things Arthurian, next week we investigate in Brittania, and I try my hand at one of several vegetarian recipes. Do join me!

Soup goes great with sandwiches! Get the recipe for “Milagro's Sopa de Lima” from the 2nd Taste of Texas Mystery by Rebecca Adler, The Good, the Bad and the Guacamole!