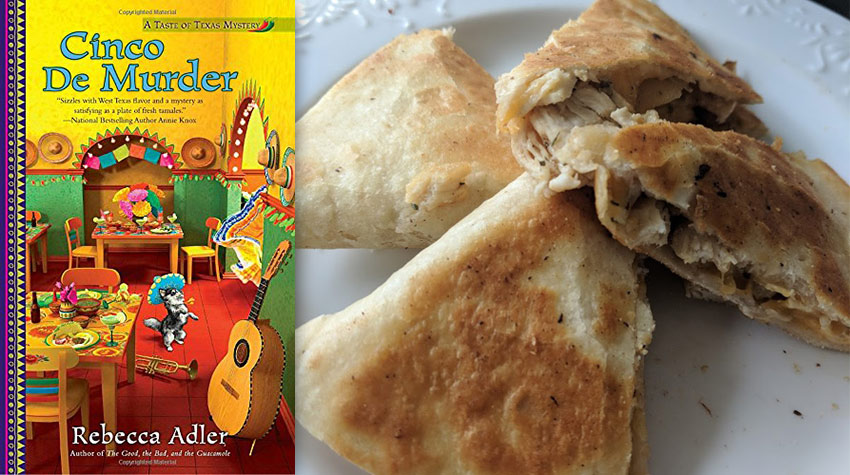 I really enjoyed this third installment in Rebecca Adler’s Taste of Texas series. Our heroine, Josie Callahan, is really starting to grow into her sass and repartee with her fellow citizens of Broken Boot, Texas. And the colorful aphorisms that pepper the book are a linguistic delight!

But I’m getting ahead of myself. It’s Cinco de Mayo, and the town council has organized a parade, fireworks display, and other festivities—including the First Annual Charity Chili Cook-Off, overseen by Josie’s own Uncle Eddie. Given the immense rivalry between the town council members, Uncle Eddie is under a lot of pressure to deliver, especially since the Cook-Off is being held under the aegis of the International Chili Association, which is watching the proceedings like a hawk to see whether Broken Boot will be allowed to keep running the competition in coming years.

Unfortunately, the Cook-Off has attracted all sorts of unpleasant people who quickly make life a headache for Josie and her family. The most unpopular of the crew is a chilihead named Lucky Straw (yes, really), who seems to positively revel in the number of enemies he has. When he’s found dead in his tent on the morning of the competition, the future of the Cook-Off, as well as Eddie’s reputation, is thrown into doubt. Luckily for Eddie, the other competitors are all happy to keep going. But when Lucky’s death is ruled a murder, everyone becomes a suspect.

Josie is quick to put on the investigative-reporter hat she wears for the Broken Boot Bugle when she isn’t waitressing at her family’s restaurant. A series of break-ins has the local police wondering if there could be a connection to Lucky’s murder. Josie gets to spend a lot of quality time tagging along with the newly-minted Detective Quinton Lightfoot as they investigate both crimes. I really like how their relationship is developing and greatly appreciate the ease of their hilarious conversations.

I’m also very fond of Josie’s irascible abuela-by-marriage, Señora Mari. Her attitude towards Cinco de Mayo is similar to the one held by another Mexican-American I know, a manager of mine back when I waited tables. He has strong opinions about the fake holiday as well, though he, like Señora Mari, does enjoy a good celebration regardless of reason.

Further reason to celebrate is the inclusion of six mouth-watering recipes. I very much enjoy eating Tex-Mex food but haven’t had a lot of experience cooking it, so decided to try the most basic of them all: 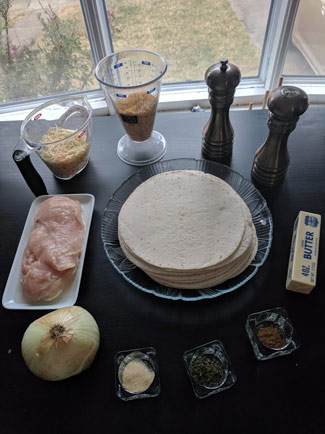 Season chicken breast with oregano, garlic, cumin, and salt and pepper to taste. Fry in small amount of oil over medium heat. Cook until browned and cooked throughout. Shred the chicken, using 2 forks.

Brown and caramelize onions in butter.

Spoon 2 tablespoons of each cheese on one side of the tortilla. Add some chicken and caramelized onions. Fold tortilla in half. Fry in butter over medium-low heat until cheese is melted and tortilla is golden brown. 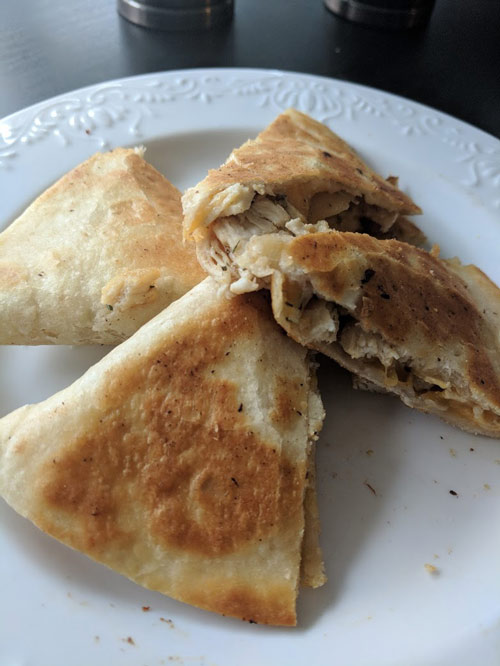 I had never made quesadillas before, so these were a revelation! I didn’t realize that it’s as easy as making a grilled cheese sandwich, and I’m looking forward to making many, many more in the future. However, I do have some serious edits to make to this particular recipe. While the spices and flavors were perfect, the portions of filling ingredients to tortilla were all wrong. My lovely assistant Karin and I wound up able to make only 6 quesadillas out of 2 chicken breasts and the listed amounts of onion and cheese, which was more than enough to feed us and my family but falls far short of the 8-10 servings promised. I also side-eye any onion caramelization that doesn’t take upwards of 20 minutes to complete. It’s okay to just call them sautéed onions—they’re still delicious.

That said, I’m definitely going to make this recipe again, with adjustments to up the amount of chicken, onions, and cheese. These quesadillas were immensely satisfying, especially given how quick and easy they were to make.

Next week, I head further west to Arizona to indulge in some decadent cupcakes. Do join me!