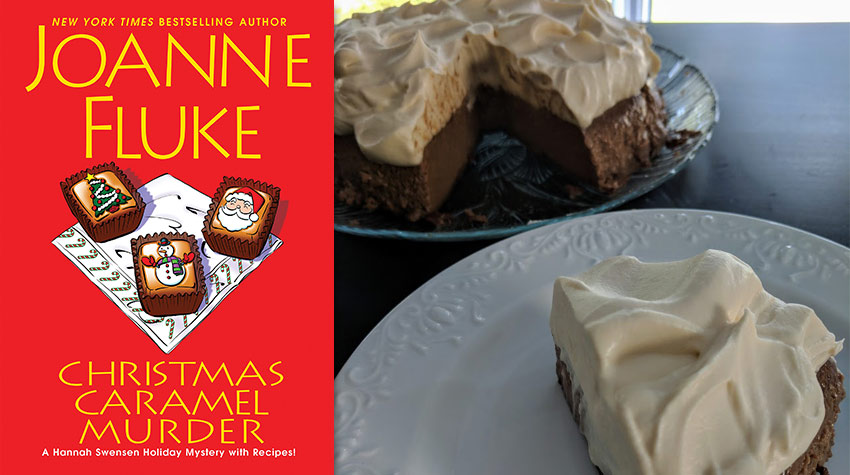 Our heroine, Hannah Swensen, is having dinner at the Lake Eden Inn with her new husband, Ross Barton, when talk turns to Christmas of the year before, where a dessert Hannah’s business partner made was the unfortunate star of a murder. Lisa Beeseman was rightfully proud of her Christmas caramels, packing them each day for the lunch of her beloved husband, Herb. So when they’re found in a personalized lunch box at the bottom of a ditch beside a dead body, they can only point to the involvement of one of Hannah’s dearest friends in the murder of vixen Phyllis Bates.

Phyllis had just moved back to Lake Eden after an absence of over a decade. After embarking on a brief affair with Mayor Richard Bascombe, Phyllis looks to be sinking her claws into Herb, who was her boyfriend back in high school. Eager to shake her hold on him, Richard is more than happy to divert her attentions, even forcing the casting of Mrs. Claus in the annual Christmas extravaganza in her favor. Lisa had nurtured hopes of being Mrs. Claus this year to join her husband who traditionally plays Santa, but she successfully swallows her bitterness—until Phyllis lands a passionate kiss on Herb during rehearsals, with Lisa and Hannah in the audience.

Lisa is stricken, and not just because of the kiss: Herb has been coming home late at night claiming that work is keeping him busy, but when a concerned Lisa drives by his office, she finds no one there. To help distract her friend, Hannah suggests dinner at the Corner Tavern. Girl talk and good food seem to go a long way toward allaying Lisa’s fears, but finding Phyllis’s cold corpse as they’re leaving the restaurant unleashes a whole new set of problems.

Hannah’s investigations lead to several Dickens-inspired interludes that I quite enjoyed, in keeping with the Christmas season. I’m not sure how I felt about the revelation of the killer, though. The motive felt rather underdeveloped, in stark contrast to the prior books in the series. But like those other books, there was an extensive recipe section, with 12 entries. I figured it was time for my annual foray into making flan, with this intriguing twist on the classic recipe:

Preheat oven to 350 degrees F., rack in the middle position. 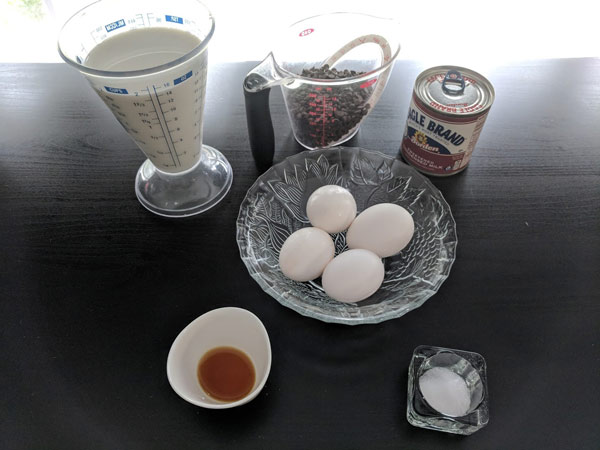 For the Chocolate Flan:

For the Caramel Whipped Cream:

Select a round glass casserole that’s approximately 10 inches in diameter.

Locate a baking pan with 4-inch or taller sides that is large enough to hold your glass casserole with at least an inch and a half of space on all sides.

Set the casserole you’ve chosen inside the baking pan. Eventually, this baking pan will hold hot water to “bathe” the outside of your flan casserole. This water bath, or bain marie, will keep your flan from baking too rapidly and becoming hard around the edges.

Spray the inside of the glass casserole with Pam or another nonstick cooking spray.

Put two potholders or oven mitts out on the counter where they will be handy.

Heat the cup and three-quarters of whole milk at MEDIUM heat on the stovetop in a medium-sized saucepan until it almost comes to a boil. You’ll be able to tell that this is going to happen when bubbles start to form around the edges of the saucepan and steam begins to escape from the milk.

Pull the saucepan with the milk over to a cold stovetop burner and stir in the cup of semi-sweet chocolate chips.

Stir until the chips are melted and the mixture is a uniform color. If this doesn’t happen, your milk was too cold. Put it back on the burner and stir constantly for another minute to make sure the chips are melted. Then pull it off the heat and turn off the stovetop burner.

In a large bowl on the counter, whisk the 4 large eggs until they’re light-colored and fluffy.

Add the can of sweetened condensed milk, the vanilla extract, and the salt to the bowl with the eggs.

Pour the resulting mixture into your prepared casserole.

Set your casserole inside the larger baking pan.

Run water as hot as you can get from your tap, and fill a large measuring cup with a spout.

Pour hot water from the measuring cup inside the larger pan. Keep pouring until the water level reaches halfway up the sides of the casserole holding your flan.

Loosely cover your flan with foil and poke a few holes in the foil to let steam escape as it’s baking.

Carry both pans to the oven and put them inside to bake.

Bake your flan at 350 degrees F. for 50 to 70 minutes, or until the blade of a table knife inserted one inch from the center of the flan comes out clean.

If your knife has liquid residue sticking to it when you remove it, your flan is not fully baked. Give it another 5 minutes in the oven, wash and dry your table knife in the meantime, and test it again.

When your table knife comes out clean, use oven potholders to take both pans out of the oven together and set them on a cold stovetop burner. 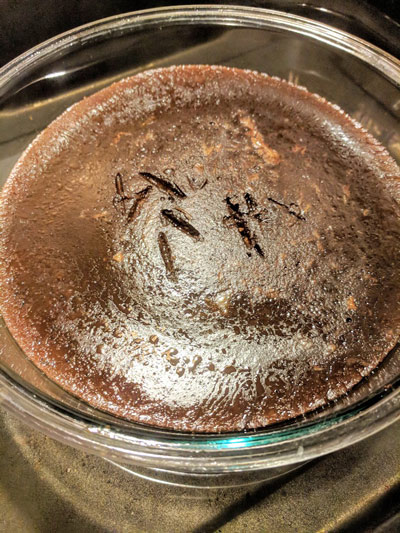 Set your timer for 20 minutes.

When your Chocolate Caramel Flan has cooled for 20 minutes, cover the top of the flan casserole with plastic wrap. Refrigerate your flan in the casserole for at least 4 hours, or until it’s time to serve dessert. Overnight is fine too, if you want to make it the day before you plan to serve it.

To serve, run a table knife around the inside rim of your flan to loosen it slightly. Turn it out in a flat bowl or onto a plate with a deep lip. Then make the Caramel Whipped Cream. 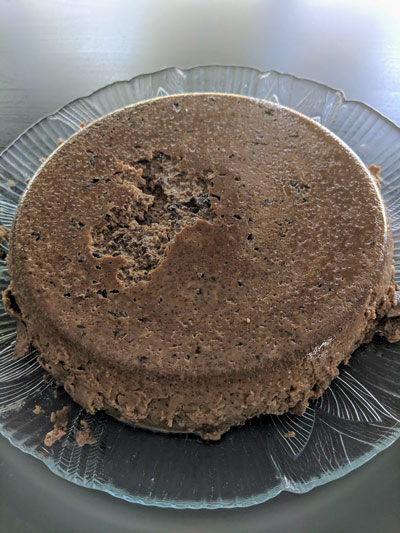 In the bowl of an electric mixer, mix the cup of whipping cream and the 5 Tablespoons of caramel ice cream topping together.

Gradually, increase the speed of the mixer to MEDIUM-HIGH and beat until the resulting mixture will hold a soft peak.

“Frost” your flan with the Caramel Whipped Cream. People will ooh and ahh when you cut slices, place them in dessert dishes and serve it. 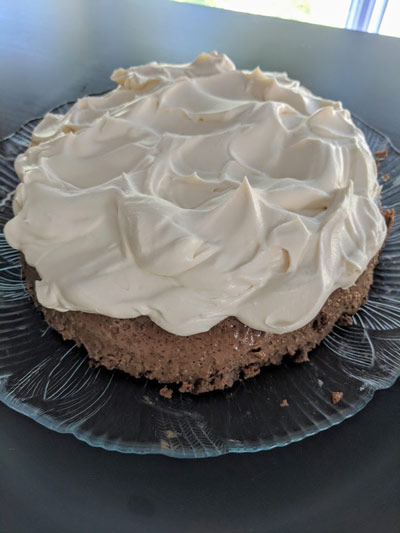 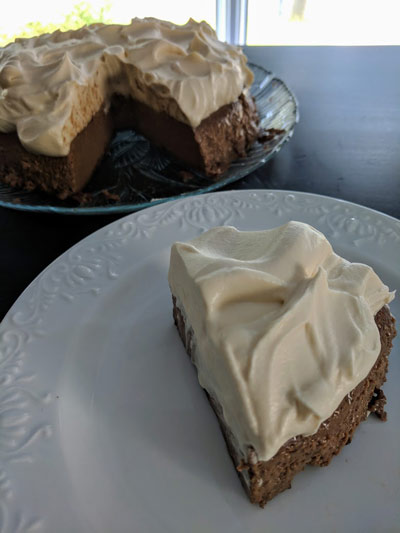 Unfortunately, I absolutely overcooked this flan, as it took almost two hours for the knife to come out looking anywhere akin to dry. I think I could have safely removed it from the oven at the 90-minute mark, at the latest, in order to ensure that the texture remained silky smooth while still being fully cooked. That said, it was still an exceptionally delicious dessert, even if purists would rightfully turn up their noses at the slightly curdled texture—though perhaps purists would shy away from chocolate in this dessert in the first place. The chocolate flavor is perfectly balanced, in my opinion, and the caramel whipped cream is a revelation on its own while also being a homage to the traditional dessert that is at once playful and clever.

Next week, we continue with Hannah and Ross’s adventures in the present day, as newlywed life begins for them and I make a yummy dinner entree. Do join me!