Cooking the Books: Bought the Farm by Peg Cochran 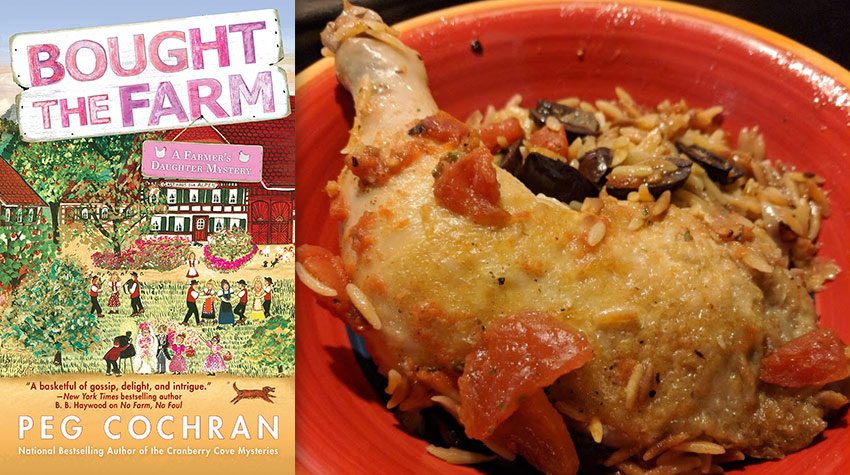 The third book in the Farmer’s Daughter Mystery series finds our immensely likable narrator, Shelby McDonald, busy with last-minute preparations for the wedding of her good friends Kelly Thacker and Seth Gregson. She’s loaned them the barn at Love Blossom Farm for the nuptials and is helping set up not only for a terrific barbeque feast but also for the appearance of a country rock band headlined by Travis Cooper, recent winner of the America Can Sing television show.

It doesn’t take long for Shelby to realize that Travis stirs up a lot of bad blood wherever he goes. Returning here to his hometown only seems to make it worse, digging up old skeletons that Shelby is intent on avoiding while celebrating her friends’ special day. Alas, there’s no avoiding his dead body when it is strung up like a scarecrow in her field after the wedding guests have all gone home.

Shelby isn’t the only person who has to incorporate the immediate aftermath of this tragedy into her life: Travis’s band is told to stay in town to help with investigations, so they ask to rent out her barn for practice space in the interim. Shelby sorely needs the money, but as she gets to know each band member—and thereby, the dead man—a little better, she soon realizes that her innocent conversations are putting her in the path of a killer who will not hesitate to strike again and again.

Shelby is a wonderfully written character in a strong main cast that often feels less created than reported on. Her kids, especially, have their own interesting subplots, with Amelia’s school dilemma being particularly engrossing. I was also taken with Peg Cochran’s depiction of farm and small-town living as well as Shelby’s cooking and blog. It’s refreshing, too, to have a slightly older heroine who approaches her realistically complicated romantic life with thought and care.

There were quite a few awesome dishes described in the book, and three of the recipes were included in the back. I decided to try out the one entree recipe: 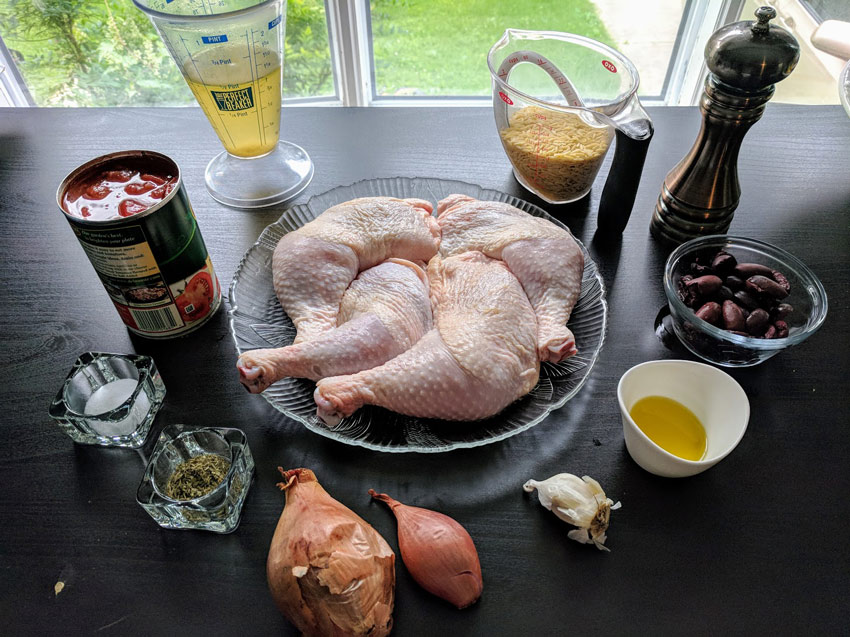 4 to 6 chicken thighs–with bone or boneless/skinless

1 teaspoon Italian seasoning or a blend of oregano, thyme, and basil

1 teaspoon salt, or to taste

½ cup Kalamata olives, pitted and cut in half

Heat olive oil in a sauté pan and add chicken thighs, skin side down (if using thighs with skin.) Sauté until skin is nicely browned.

Return chicken to pan and add broth, diced tomatoes, seasoning, and olives. Bring to a simmer and cook over low heat until chicken is done—approximately 20 minutes—and broth has been absorbed and orzo is al dente. 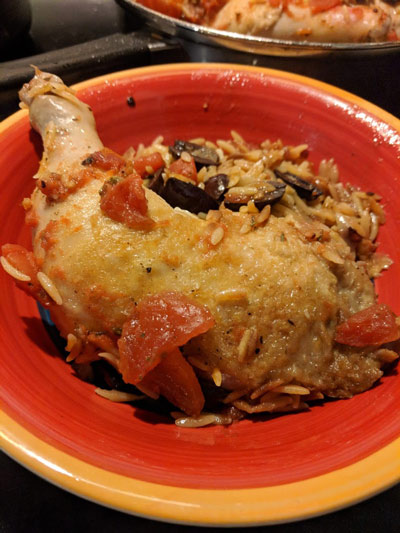 I had a bunch of chicken legs in my freezer, so I figured I’d use them up (along with substituting some shallots I had as a milder version of the onion) in this dish. I was a little concerned with the timing used in the recipe, as I didn’t think that a quick sear and 20 minutes of sautéing would be enough to cook the chicken through, even if I were using slightly smaller chicken thighs. I was right to worry: the recipe, as written, results in undercooked chicken, though the rest of it comes out quite nicely. I had to microwave the chicken for five more minutes to cook it through before throwing it back in with the orzo to serve.

So, I’ll let you in on a secret: due to the way my schedule works, I usually choose and cook my recipes for this column before I get a chance to read the mystery itself. After my disappointment at how this recipe did not properly instruct the reader to cook the chicken, imagine how I felt when I finally read the book and this same dish is almost off-handedly described with the crucial step added of putting a lid on the pan for the 20 minutes of simmering. That’s quite a significant instruction to leave out of the recipe in the back! Putting the lid on concentrates the heat and pressure inside the pan, cooking the contents more quickly and, in my opinion, better melding the flavors. I hardly think one should have to remember details that aren’t central to the plot in order to best prepare a dish from a culinary cozy’s recipe section. I am sure, however, that a second attempt with this step included will make this beautiful meal taste as good as it looks.

Next week, we head east to start a brand new series and try out an old-fashioned dessert. Do join me!

See also: Cooking the Books: The Diva Cooks Up a Storm by Krista Davis