Cooking the Books: Three Treats Too Many by Debra H. Goldstein 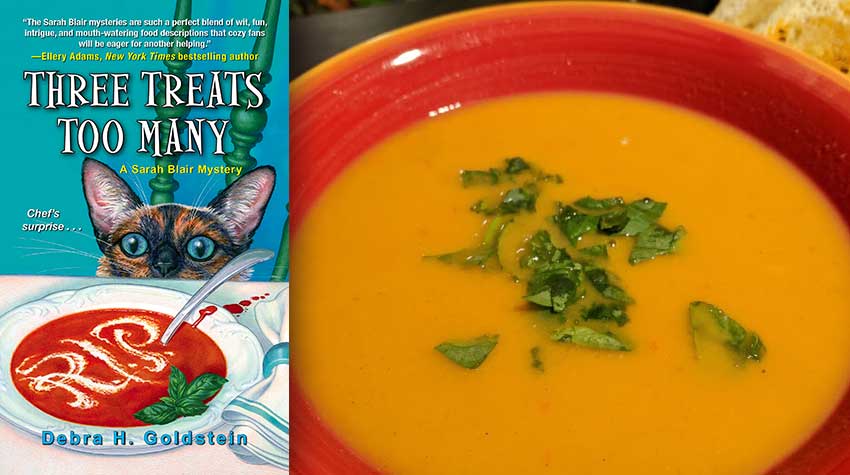 The building inspection of Southwind, the upscale restaurant Sarah Blair co-owns with her twin sister, Emily, is taking forever, much to their chagrin. To make matters worse, another restaurant has just opened up across the street from Southwind, having seemingly sailed through the inspection process. Adding insult to injury, the new restaurant, Jane’s Place, is named after its owner, the same woman who cheated with Sarah’s ex-husband and later had the temerity to try to claim Sarah’s beloved cat RahRah as her own.

So it’s with a distinct sense of discomfort that Sarah shows up to Jane’s grand opening, primarily in order to scope out the competition. Even she has to admit that the Alabama farm-to-table vegan cooking that Jane’s chef, Riley Miller, is plating is superb. Jane, as usual, is taking advantage of the occasion to politic a little, complaining to members of the police and the town council about the noise from the veterinary office next door and the motorcycle club that parks on its premises. But it’s her own screams that will shatter the night later on, when she discovers Jacob Hightower, one of Southwind’s line cooks, standing over Riley’s corpse.

Jane immediately accuses Jacob of murder. Acting Police Chief Dwayne Gerard, having learned his lesson from prior murders here in Wheaton, is determined to be methodical in gathering all the evidence and testimony. While Sarah approves of this new attitude, her opinion is not shared by Anne Hightower, Jacob’s older sister and prominent member of the town council. Given Sarah’s reputation for solving recent murder cases, Anne wants Sarah to clear Jacob’s name and find the real culprit.

While Sarah firmly believes in Jacob’s innocence, she has misgivings about getting involved, especially since her boss, lawyer Harlan Endicott, has been hired to represent Jacob. But as she and Harlan build a case for Jacob’s defense, she finds herself investigating more than she thought she would—and soon finds herself in the crosshairs of a ruthless murderer.

This was another charming, character-driven installment of Debra H. Goldstein’s Sarah Blair Mystery series, as Sarah looks into the background of a seemingly carefree and talented young chef to uncover the many secrets that led to her murder. Along the way, we learn a lot about vets of both the veterinary and veteran kind as well as motorcycle clubs and restaurant shenanigans. I was genuinely thrown for a loop when Anne accuses someone very close to Sarah of the crime, and I was impressed with how Judge Goldstein built the story up around that.

Three Treats Too Many also included four recipes, all of which are vegetarian, with two being vegan! Since it’s definitely getting to be soup season with the weather getting chillier out here in Maryland, I decided to try this vegan soup option: 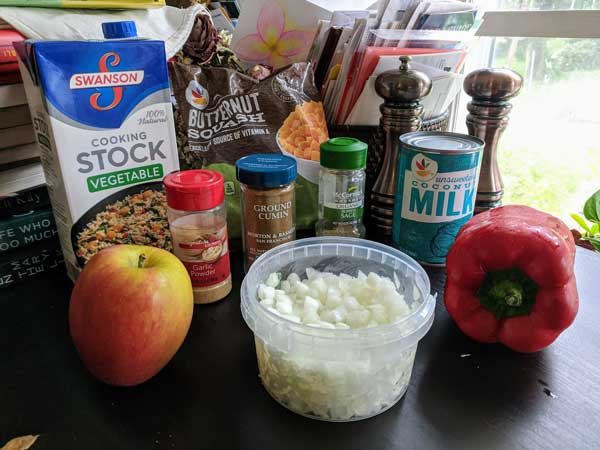 Chop an onion, an apple, and a red pepper (more if desired).

Put all in the Crock-Pot.

When everything is soft, blend or puree.

Season with sage, garlic, cumin, salt. or pepper (whatever you prefer to your taste) .

Add 1 can coconut milk into the Crock-Pot just before serving. 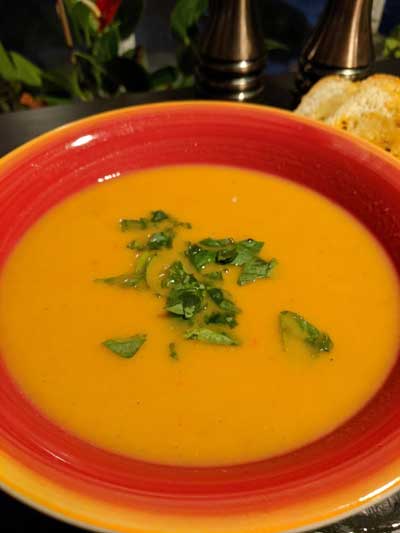 I let my vegetables cook on low in the crockpot for 8 hours, which really brought out their yummy autumn flavors. I did decide to add the spices with the vegetables and stock at the beginning of the cooking process instead of at the end—sprinkling a half teaspoon each of rubbed sage, cumin, salt, and pepper on top—because I prefer for the flavors to meld together over the course of several hours. You should absolutely adjust to taste, of course. I added at least another half teaspoon of salt later on after pureeing and adding coconut milk. I also chopped a little spinach to add as a garnish, both for color and for a little extra brightness on the tongue. This recipe makes quite a lot of soup, but it keeps well in the fridge. It made for a tasty side dish for my family’s other meals throughout the rest of the week.

Next week, we head back east to make another vegan treat, this time a dessert, while solving a mystery that could have its roots all the way in the Revolutionary War. Do join me!