Cooking the Books: Strangled Eggs and Ham by Maddie Day 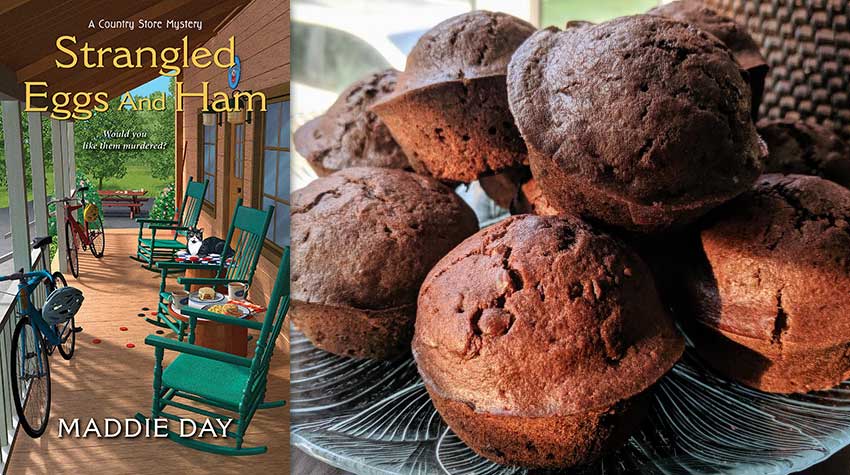 In book six of the Country Store Mystery series, heroine Robbie Jordan’s biggest headache seems to be keeping the peace between her customers over plans to build a resort on a nearby Indiana hilltop. While her Aunt Adele is excited about getting back to her radical past and leading illegal protests against the resort and its potentially negative impact on the environment, many others—including Robbie herself—think the proposed development would be a boon to the local economy. Adele is happy to ignore Robbie’s tepid support when it turns out that one of Robbie’s B&B guests is an environmental lawyer with a knack for getting in the craw of property developers. When Gregory DeGraaf offers the fledgling group of protestors his legal support pro bono, Adele is thrilled.

Her emotions do a quick 180, however, when Gregory is found strangled to death shortly thereafter up by where the development is breaking ground. To Robbie’s chagrin, the murder doesn’t necessarily dampen Adele’s zeal, not even when threats continue to be made targeting Adele. This forces Robbie to involve herself in the investigation against her own better judgment in order to protect her beloved aunt from a ruthless killer.

But are the threats even related to Gregory’s murder? Was he killed because of his involvement with the protests, or did he have dark secrets all his own?

Strangled Eggs and Ham was a nuanced look at small-town economics, presenting the pros and cons of resort development with the intelligence and sensitivity I’ve come to rely on from Maddie Day. Her depiction of running a small business was also spot on, and I felt for Robbie as she worked hard to keep her country store afloat while helping with police inquiries throughout. That said, it’s always fun for the reader to spend time in South Lick, Indiana, with this terrific cast of characters—even if (or perhaps especially because for us cozy fans) murder always seems to be on the menu.

Also on the menu in this book is six delicious recipes! Ms. Day does such an amazing job of talking up her food in her novels—particularly the Indian-spiced roasted potatoes in this one—but I ultimately decided to try out a sweet and healthy baked good: 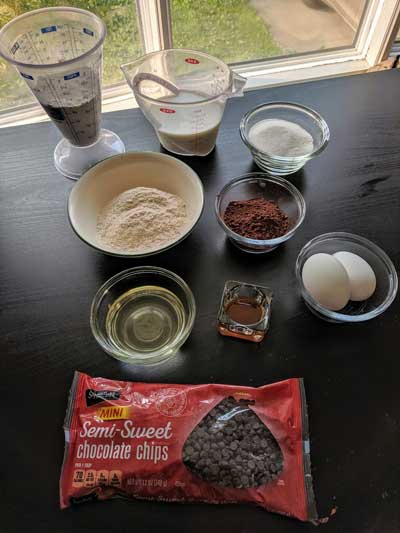 Combine the dry ingredients in a mixing bowl. Make a well and break the eggs into it. Stir them with a fork to slightly mix. Add oil, milk, vanilla, and chocolate chips, and mix in with a fork until barely combined.

Fill muffin tin and bake for twenty minutes or until lightly browned on top.

Let cool for ten minutes in the tin before removing. 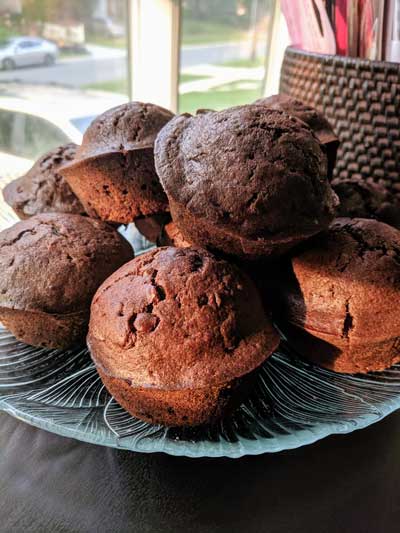 My only quibble with this recipe is the note to cook until the muffins are lightly browned on top; given that the batter is cocoa-colored, I’m not entirely sure when that would be! I was also concerned about leaving the muffins to steam in the tin, but I should never have doubted, as the end result proved that Ms. Day knows what she’s doing. These were delightful, chewy muffins with moist and tender insides that will absolutely delight chocolate fans without sacrificing health altogether. My kids scarfed these down almost as fast as I could make them!

Next week, we travel to the East Coast where I dip into the repertoire of one of the best chefs writing culinary cozies today to try a spin on a traditional snack. Do join me!