Cooking the Books: Southern Sass and a Battered Bride by Kate Young

Marygene Brown’s ex is getting married! In a fit of sadism, his fiancee, Lucy Carmichael, has hired Marygene’s diner to cater her murder-mystery-themed wedding banquet. Alex Myers is more than just an ex-boyfriend, though; Marygene is best friends and co-workers with his cousin Betsy, and Alex himself is a deputy to Marygene’s dad, Sheriff Eddie Carter. Even though Marygene and Alex weren’t fated to be together, their bond is deep and long-lasting. So Marygene doesn’t rightly feel like she can say no to catering his wedding, even if Lucy is doing her level best to make her life a living nightmare.

When Marygene and Betsy stumble over Lucy’s body sprawled on the floor of the wedding tent after the ceremony, they assume it’s part of her murder mystery setup. But Alex’s reaction to seeing Lucy lets them know that this tableau certainly was not planned. In the hubbub of calling a doctor and trying to calm the wedding guests milling outside, Lucy’s body vanishes. Alex proceeds to lose his mind, accusing Marygene of murdering his bride. When neither she nor anyone else is arrested for Lucy’s murder, Alex decides to go over the sheriff’s head and bring in outside law enforcement from Atlanta, in the form of the maybe-corrupt Detective Thornton.

Detective Thornton and Marygene have history, but even he seems reluctant to pin the crime on her given the facts of the case. With wild accusations flying and various members of the Brown and Myers clans in and out of either custody or the hospital, Marygene must get to the bottom of the turmoil roiling her peaceful Georgia island, with a little help from the spirit of her deceased Mama.

I love spending time with the good-hearted Marygene as she and her Mama’s ghost try to right wrongs and help the souls of those who met violent ends find peace and closure by bringing their killers to justice. Marygene’s family is also a soothing, supportive presence, in stark contrast to the Myers clan, who were even more of a headache than usual in this third installment of the series. I can mostly understand why she puts up with Betsy’s well-meaning if completely insane shenanigans—at least Betsy is entertaining!—but Alex is just The Worst. It was also nice to see Marygene’s relationship with Deputy Javier Reyes progress, as I finally get over shipping her with the reporter from the first book.

There were seven recipes included, and I decided to try this savory dish after our recent run of sweets: 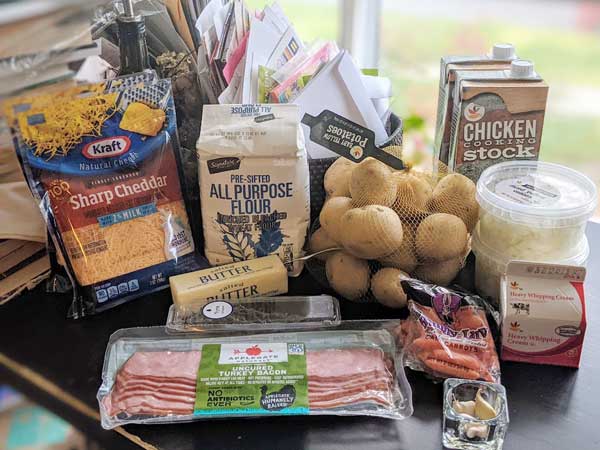 A pinch of thyme

Cook the bacon over a medium heat until crispy in olive oil. Remove with a slotted spoon and set aside. Add butter onions, garlic, carrots, and potatoes cook for five minutes, stirring occasionally.

Stir in the flour, making sure to coat the vegetables. Add the stock and bring to a boil. Cook, partially covered, for fifteen minutes or until potatoes are tender.

Place the shredded cheese in a large mixing bowl and add a quarter cup of the hot soup, mixing until smooth. Return it to the pan. Gradually add in the cream, salt and pepper and thyme. Heat until almost boiling.

Some good crusty bread for dunking is also delicious. 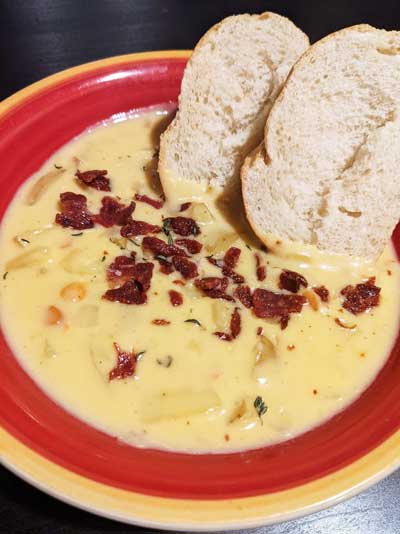 I love a good cheesy soup, and this did not disappoint! It was rich and tasty, though if you want it to taste better as leftovers, I recommend peeling the potatoes, as I did not (I’m weird about getting rid of nutrients that way). Unpeeled potatoes taste just fine in a fresh soup but can taste a little bitter after a day or two.

As for the recipe itself, I did find that I had to add significantly more than the quarter cup of hot soup to the shredded cheese in order to get a smooth mix. I just kept adding ladlefuls until I got the consistency I was looking for, then poured it all back into the pan. Overall, this made for a lovely, filling meal with baguette slices on the side.

Next week, we travel to the opposite coast to bake some bread and bring another killer to justice. Do join me!