Cooking the Books: Read On Arrival by Nora Page 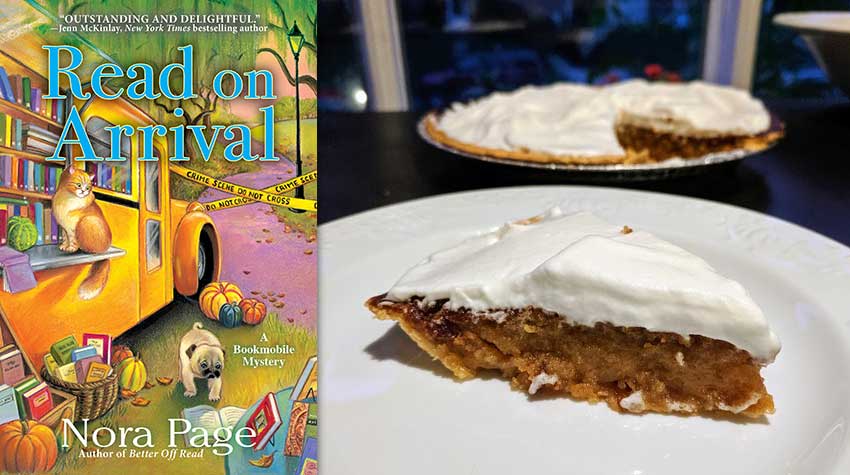 Seventy-something-year-old librarian Cleo Watkins is too well-bred to have a nemesis, but if she did, it would probably be the irrepressible Dixie Honeycutt. For the past four decades, Cleo has been trying to get Dixie to return one very, very overdue book to the Catalpa Springs Public Library. But Dixie has outfoxed her at every turn, seeming to take an almost sadistic delight in baiting and evading the older woman. More seriously, Dixie claims that Luck and Lore—the fairly hefty volume on folklore and superstitions the world over that she’s been hanging on to—is her good luck charm, and she shows no signs of ever seriously relinquishing the book to where it rightfully belongs.

So, when she shows up at Cleo’s bookmobile one day announcing that she’s trying to mend her ways, Cleo is understandably skeptical. Dixie claims that omens are foretelling her own doom and that she needs to make amends before dying, so she instructs Cleo to come by her house the next morning to pick up the book. Reluctant but conscientious, Cleo shows up at the appointed time and place in the fortifying company of her gentleman friend, Henry Lafayette, only to find a dead Dixie and no overdue volume in sight.

Once it becomes clear that foul play was involved, Cleo inevitably becomes a suspect in Dixie’s murder. Cleo isn’t too worried about this, as she’s fairly certain that her neighbor, Detective Gabby Honeycutt, will find the real killer soon enough. However, she soon has her hands full with the arrival of the overbearing Belle Beauchamp, who seems to have bamboozled Library Board President Mercer Whitty into allowing Belle to “rebrand” the library into a destination far removed from its original purposes. As if this weren’t enough of a headache, creepy notes and bad omens begin plaguing their small Georgia town, driving the citizens into a frenzy that could culminate in yet another murder unless Cleo actively involves herself with solving the mystery of Dixie’s death.

I very much enjoyed this culinary cozy, not only for how it hearkened back to Agatha Christie’s The Moving Finger—with its examination of the effects of poison-pen notes on a village community—but also for its charming, primarily older cast of characters. Cleo and her best friend, Mary-Rose Garland, especially have a wholly believable, supportive relationship. The library shenanigans were also terrific, particularly if you have a lot of librarian friends, as I do. I actually messaged one of them while reading this novel because we both know that the terror of rebranding is not limited to small Southern libraries!

There was only one recipe included with this book, but oh my, it was a doozy:

One 9-inch pie shell (premade, your favorite recipe, or the recipe that follows)

When you’re ready to bake:

Preheat your oven to 375°F, with a rack positioned in the middle.

Roll out your piecrust and put it in your pie plate. Let the pie dough rest and chill in the fridge while you make the filling. 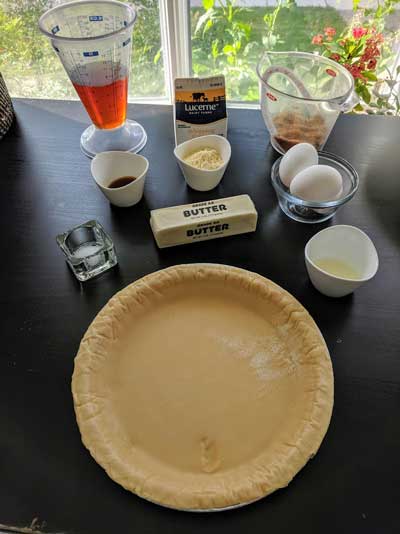 In a medium or large bowl, whisk the melted butter, brown sugar, cornmeal, salt, and vanilla. Whisk in the honey next and then the eggs, one at a time. Finally whisk in the cream, followed by the lemon juice.

Pour the filling into the prepared, unbaked piecrust. Place in the middle of the oven and bake for 45 to 55 minutes.

The top should get a lovely golden brown, the color of rich honey. Look for set sides with a jiggle in the middle. Let cool for an hour or two. Top with honey-sweetened whipped cream. 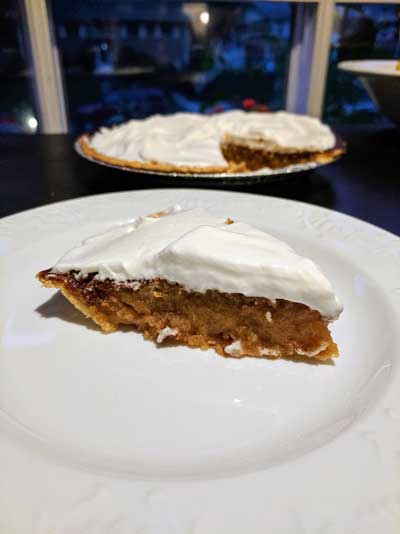 Nora Page does include a delicious-sounding recipe for the crust, but I decided to go with premade for my first attempt at this pie. Since my oven tends to run a little cool, I set the timer for the full 55 minutes and was not pleasantly surprised by the appearance of the pie at the end of it. The pie was definitely done all the way through and looked suspiciously burnt at the edges. It doesn’t help that my kitchen floor is at a bit of a tilt, but I was definitely feeling a very ironic #NailedIt upon first pulling the pie out of the oven. My lovely assistant Karin and I decided to see whether making fresh, honey-sweetened whipped cream would help. So once the pie had cooled somewhat, we mounded on the topping before sitting down to our own slices.

And wow, looks can be deceiving, dear reader! I’d still pull the pie out at 45 minutes or so the next time I make this, but oh, what a delicious dessert. The honey whipped cream did help make it look much more palatable, in addition to providing a nice light contrast to the rich, sweet filling and buttery crust. Fortunately, the parts that looked burnt turned out to taste more caramelized than carbonized. I’m definitely looking forward to attempting this dish again.

Next week, I get to revisit a series I first became acquainted with earlier this year and cook through it from beginning to end, starting with an amazing vegan side dish. Do join me!