Cooking the Books: The Quiche and the Dead by Kirsten Weiss

The first book in this delightfully kooky culinary cozy mystery series finds our heroine, Val Harris, trying to sell off her wedding dress after her engagement implodes. Now she’s stuck in the  Northern California small town of San Nicholas, having poured all her savings into opening her beloved pie bakery, Pie Town, back when she thought she and her fiancé, Mark Jeffreys, were going to live in his hometown happily ever after.

Luckily, she has several friends despite being a relative newcomer to the area. Foremost among these is the eccentric Charlene McCree, her crust maker, whose skill with pastries is rivaled only by the breadth of her knowledge of and unrelenting belief in conspiracy theories and the supernatural. Charlene apparently once dated Joe Devlin, one of Pie Town’s morning regulars. When Joe finds out that Val baked a “welcome to the community” quiche to greet her new business neighbor Heidi Gladstone, he bets her the quiche that her overture will go down like a lead balloon. To Val’s dismay, the health-conscious Heidi proves to be just as unfriendly as Joe foretold. Val hands Joe the quiche as promised, then is shocked and distressed when he falls over dead shortly after digging in.

Pie Town has to close while the cops investigate Joe’s death, but the rampant rumors that Val’s cooking might have killed the poor man look set to make that closure less temporary than permanent. Charlene, being the paranoid type, has other concerns: she’s convinced that the cops will try to pin Joe’s poisoning on her due to the fact that she and Joe used to be involved. She ropes Val into investigating what really happened, with the guidance of Joe’s own files. Turns out that Joe was an amateur sleuth himself—and that there’s a strong possibility that one of his cases was the real reason behind his demise. Soon, Val is chasing down both rumors and the elderly-if-still-very-sprightly Charlene as she seeks to save her business while keeping her octogenarian friend out of danger.

Gosh, I started this series several books into it and am so glad I got a chance to come back to the beginning and truly savor the smart and hilarious hijinks of the Pie Town crew! All the books have been so adorable, but this one really starts off the series with flair, introducing us to all our characters as they begin to gel into the relationships we love. The mystery is quite good too, but the real highlight of the book is getting to know Val and Charlene. Bonus points for positive representation of tabletop gamers!

Speaking of whom, the gaming group regulars who form Pie Town’s core customer base inspired the breakfast pie I decided to make of the four recipes included here. 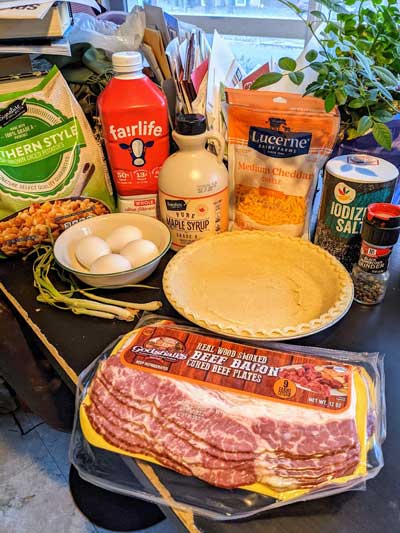 Cook three strips of bacon until crispy. Drain on a paper towel, then crumble once cool enough to touch. 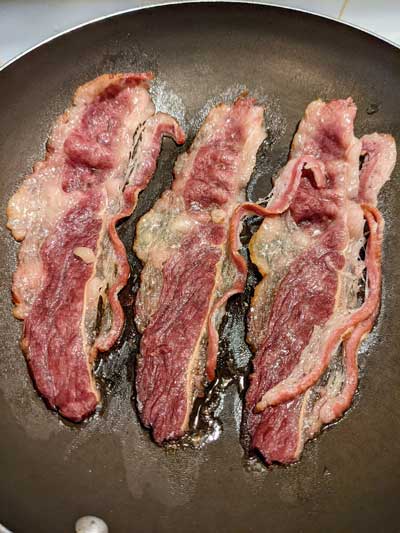 In a large mixing bowl, whisk together the milk, eggs, salt, and pepper. Add the cheese, thawed hash browns (or cooked potatoes), green onions, and crumbled bacon. Stir and combine the ingredients.

Unroll the piecrust along the inside of a 9-inch pie dish and crimp the edges of the dough. Pour the milk and egg mixture into the piecrust. 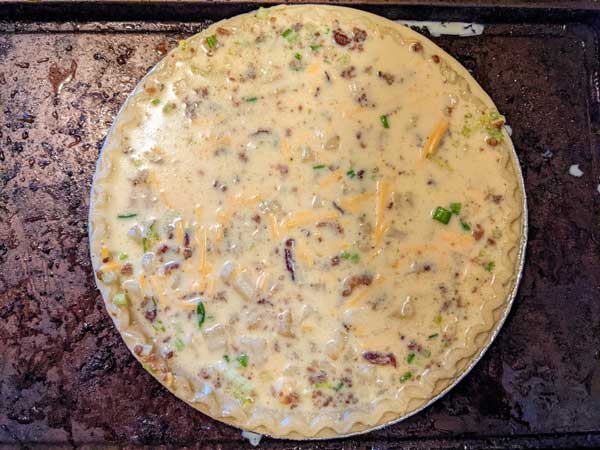 Bake for 35 to 40 minutes. The quiche should be set enough to lay the remaining uncooked bacon on top but won’t be fully cooked yet. Remove the pie from the oven. Turn up the oven temperature to 450 degrees. 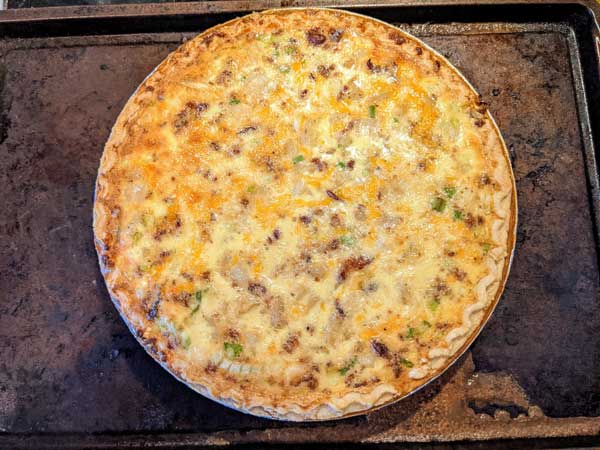 On top of the pie, weave the remaining ten bacon strips into a lattice. Lightly brush the top of each strip of bacon with the maple syrup. FYI: The bacon will shrink when it bakes, so it’s okay if the bacon hangs over the sides of the crust 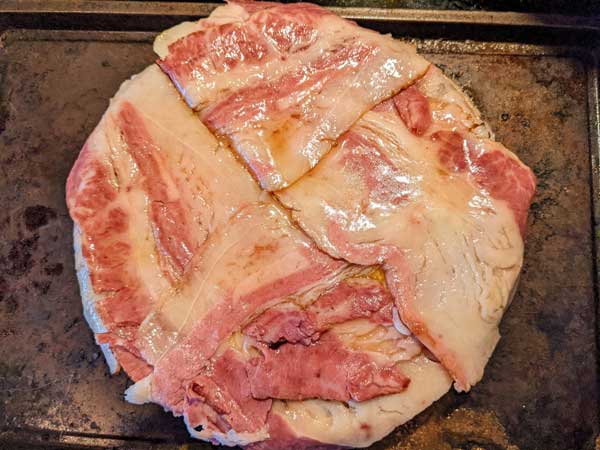 To prevent burning, cover the crimped edges of the piecrust with aluminum foil. Return the pie to the oven for an additional 10 to 15 minutes or until the bacon is as crispy as you like it. (If you like it really well done, you can stick it under the broiler–but keep an eye on it so it doesn’t burn!) 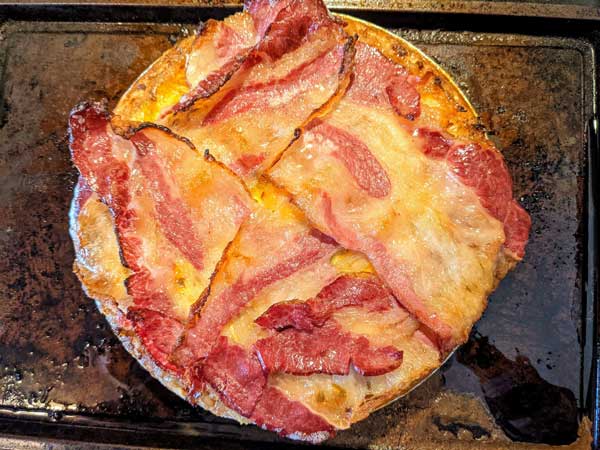 Remove the quiche from the oven, and carefully drain any bacon grease on top by slowly tipping the pie dish, or blot it with paper towels.

Allow to cool for five minutes before serving. 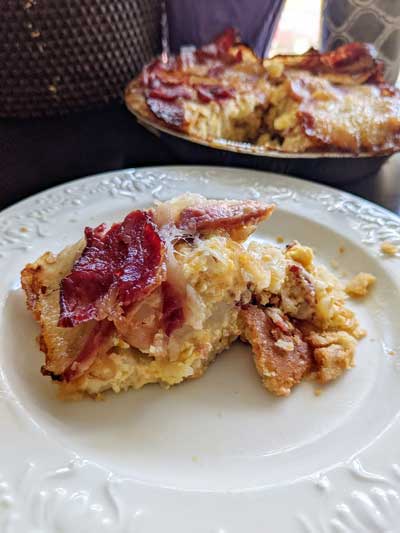 I am not joking when I say that this is the quiche of my dreams. It was exquisitely delicious, from the savory filling to the candied meat topping. Since I used beef bacon, which tends to be a little wider and fattier than pork, I crumbled five strips into the quiche instead of three and used only four strips for the lattice, as they covered the top entirely.

Pro tip: use a sheet pan both to catch spills and to make it easier to move the quiche in and out of the oven.

The final dish was so beautiful, a feast for the eyes as much as for the palate and tummy. My husband and I wound up splitting the entire thing between us over the course of several days, a testament to how we did not tire of eating it, whether fresh from the oven or as reheated leftovers.

Next week, we stay in the area to catch up on the series, reveling in purple prose to bake a delectable treat while investigating a ghost town murder. Do join me!