Hattie Hayes is excited about the upcoming Chattanooga Choo Choo Model Train Convention, mostly due to her striking a deal with the organizers to host a mixer featuring liquor from her own Moonshine Shack. She and her Granddaddy, who taught her everything she knows about making moonshine, can’t help but get caught up in the convention goers’ excitement over their hobby too as they distribute flyers publicizing both the event and their distillery. Most importantly, though, if these model train enthusiasts from all over the country fall in love with Hattie’s brew, there’s a strong chance they’ll request for it to be carried by their local liquor stores, which could increase her business exponentially.

So it’s a huge blow when one of the model train contestants falls over dead from methanol poisoning, with initial suspicions being that her moonshine is to blame. Hattie is a meticulous brewer, however, conscientiously ensuring the highest safety standards for her product, so she knows that Bert Gebhardt didn’t die from any negligence on her end. But the convention goers who had seemed so keen on her drinks are now pouring their moonshine down the drain, taking Hattie’s dreams of expanding her fledgling business with them. Despite words of caution from hunky Officer Marlon Landers—whom Hattie has been dating—and their friend Detective Candace “Ace” Pearce, she’s convinced that she needs to investigate in order to clear her name. But what will she do when her efforts put her own life in danger?

This was a tremendously fun cozy novel that lovingly explores the culture behind model trains as well as moonshine distillation. I really enjoyed spending time with Hattie and her Granddaddy as they both schmoozed with and learned a lot from the model train enthusiasts at the convention—Ronnie Wallingford’s exhibit on folk monsters of the United States, “Making Tracks: American Cryptids,” is something I wish I could see in real life! I was also deeply impressed by the empathy Hattie had for the people she was investigating, even as she doggedly followed leads to their painful and sometimes downright dangerous ends. It sounds like the next book in the series might involve a bluegrass festival! I’m definitely looking forward to that.

There were three moonshine cocktail recipes included here and I decided to try out the first two.

Each recipe makes one serving. Use 12 ounce or larger glasses. A shot glass equals 3 tablespoons or 1.5 ounces. 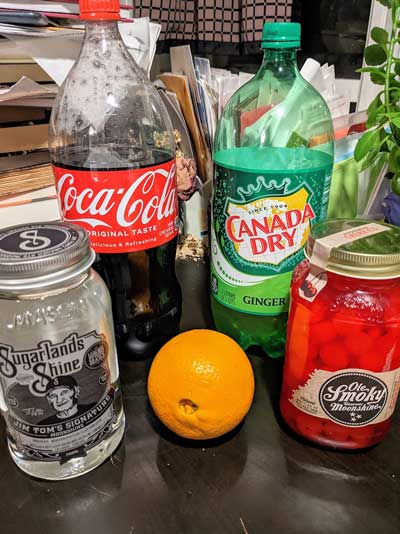 Pour the ginger ale over ice. Stir in the moonshine. Garnish with a cherry and enjoy! 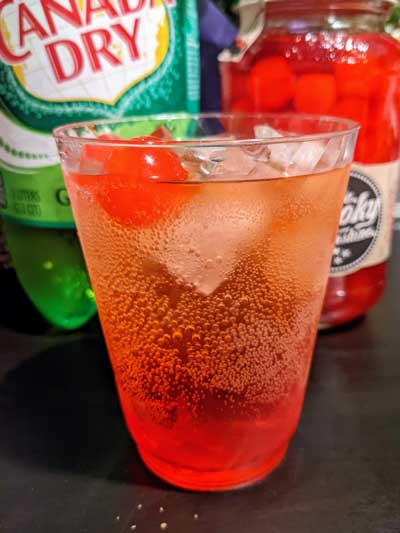 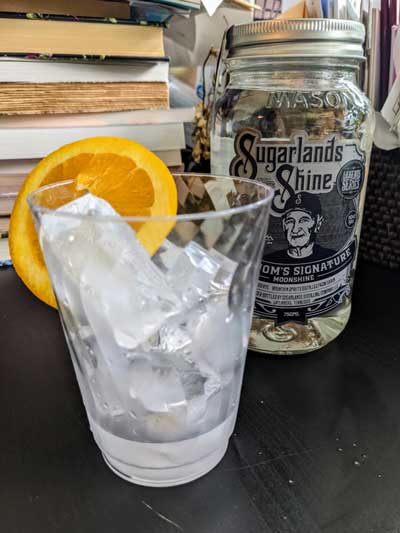 8 ounces of your favorite brand of cola

Pour the cola over ice. Add the moonshine. Cut the orange in half. Squeeze half the orange, or use a juicer, to extract the juice. Stir 2 tablespoons of the juice into the cola. Slice the remaining orange half into circular slices and use one slice as a garnish. 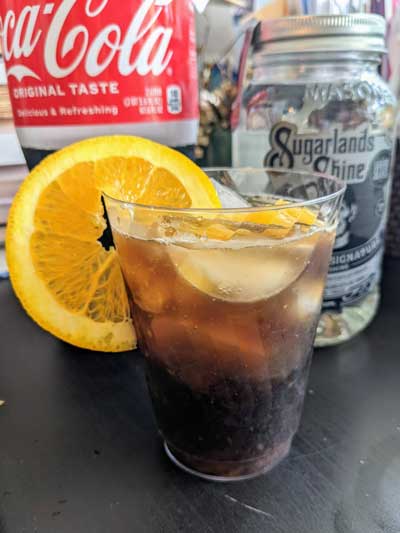 Having been a professional bartender, I found it pretty easy to make two slightly smaller cocktails than the ten-plus ouncers described here. That background, however, made it difficult for me to pour in mixers before liquor. There likely isn’t much taste difference in changing up the pouring order when it comes to moonshine, but it’s certainly more efficient to allow the soda pour to mix the drink up for you instead of needing to grab a spoon to stir your beverage.

That said, I hadn’t had a lot of experience with moonshine previously, so I was surprised by how tasty these drinks turned out to be! “The Clown Car,” named after the slang term for a caboose but featuring a bright red cherry like a clown’s nose, was probably the bigger surprise of the two. I didn’t expect a moonshine packed with maraschino cherries to produce such a tasty cocktail when combined with ginger ale, but it was a very impressive drink! I do, however, think that the “Brass Collar”—named after bigwig railroad representatives—was even more delicious than the “Clown Car,” with the fresh orange juice really bringing a special something to an otherwise standard liquor and cola combo. I definitely recommend scraping off any extra pulp into your drink too for a nice little fruity extra.

Next week, we go even further south to bake up a healthy dessert while uncovering the deadly secrets behind a reality show murder. Do join me!

See also: Cooking the Books: Muddled Through by Barbara Ross