Cooking the Books: Pleading the Fish by Bree Baker

I am only sorry that I’m coming into this series just as it’s ending! This seventh book in the Seaside Cafe Mystery series neatly wraps up all the overarching storylines in such a way that even I, a newcomer to the books, felt completely satisfied and heart-warmed even as it made me want to go back and read every book from the start. And just as importantly—if not more so—I was really impressed with the construction of the mystery here; I only realized whodunnit a page or two before our heroine Everly Swan did and was just as surprised by the revelation.

Surprise, of course, isn’t the only emotion Everly feels over the course of the events chronicled in Pleading the Fish. After she finally agrees to marry her police detective sweetheart, Grady Hays, the two of them unite to disprove the family curse that allegedly dooms all men loved by a Swan woman to a swift, untimely death. To this end, Everly consults with her town’s historical society researcher, Susan Thames, who promises to look into the matter and, hopefully, eliminate her fears.

Alas, before Susan can present Everly with her findings, the researcher is brutally shoved into the wishing well on the historic Northrop property grounds. Everly rashly promises Susan’s grieving widower that she’ll figure out who killed Susan. She’s barely started investigating, though, when festoons of duckweed and coins—just like the ones that surrounded Susan after she was found floating in the water—make their way to first her property and then to herself. These are all clearly threats from the murderer, but Everly has never let anything like that stop her before. Grady, having reconciled himself to her inveterate nosiness, has to learn to trust in her and in the self-defense lessons he’s been teaching her as they come to a showdown with a desperate killer that neither of them really saw coming.

Aside from the well-written mystery and the culmination of the interpersonal relationships between Everly and various important members of her North Carolina beach town—the revelation of the identity of the Town Charmer, a gossip columnist who’s been both help and hindrance throughout Everly’s sleuthing career, was a particular highlight—I really enjoyed the slight supernatural flavor of the book. From the curse to the intervention of various animals who’ve seemingly adopted Everly, this was a paranormal delight that didn’t stray too far outside of the realm of possibility. I very much enjoyed my time in the town of Charm with Everly and her crew, human or otherwise.

There were three recipes included here, and while I was definitely curious about the two desserts that had a prominent place in the narrative, my kids love blueberries, leading me to bake the other dish. 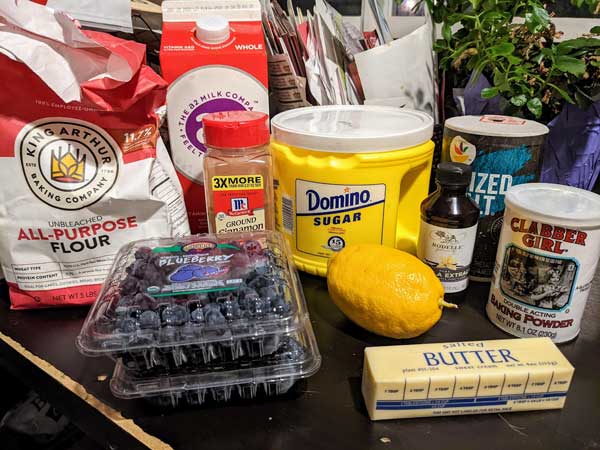 In a small bowl, mix the flour, sugar, cinnamon, and salt.

Cut in the butter until the mixture reaches a crumbly state.

In a large bowl, beat the sugar, egg, butter, lemon juice, and vanilla. 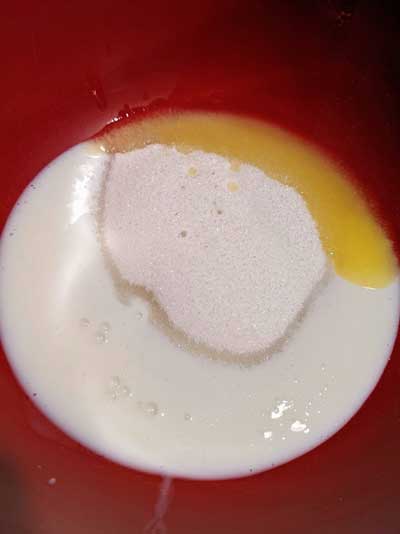 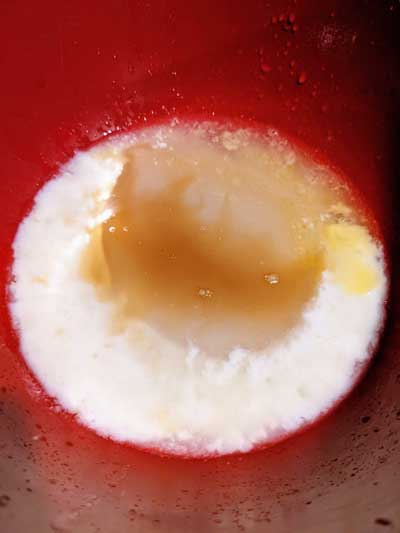 In a separate bowl, mix the flour, baking powder, lemon zest, and salt. 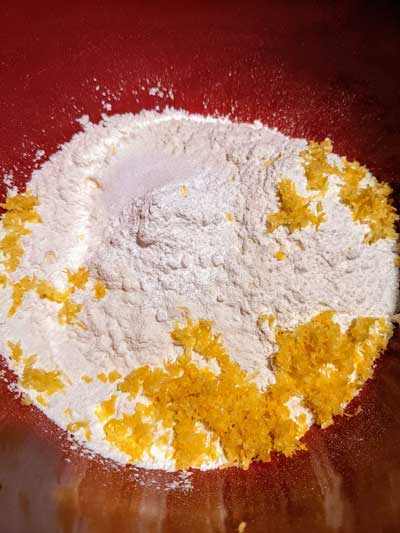 Add to the first bowl and mix. 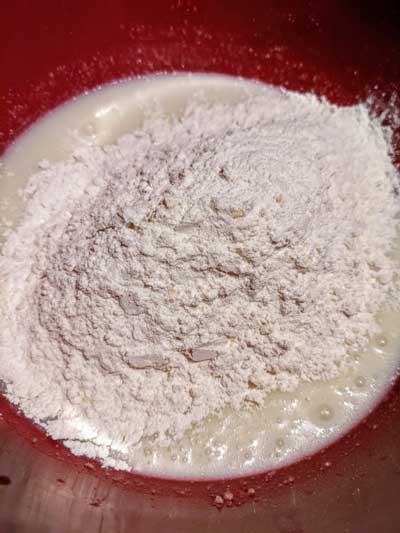 Add the blueberries and stir gently until blended. 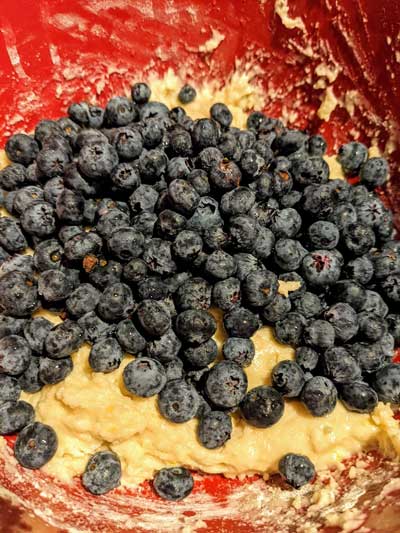 Transfer the batter to the prepared pan. 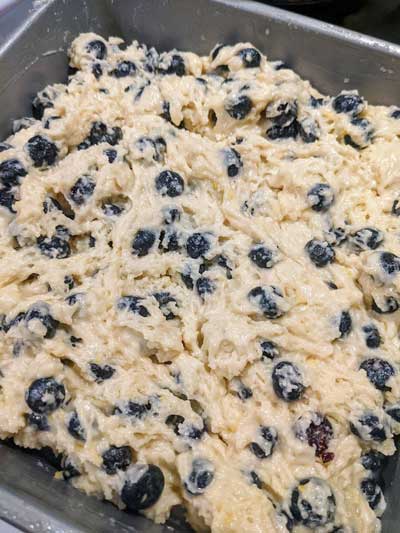 Sprinkle the streusel topping on top. 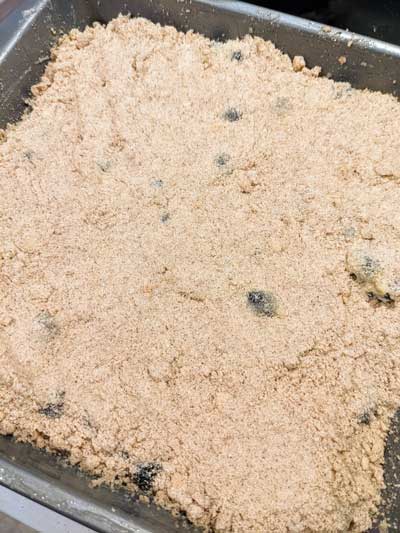 Bake for 45 minutes, until a toothpick inserted into the center comes out clean. 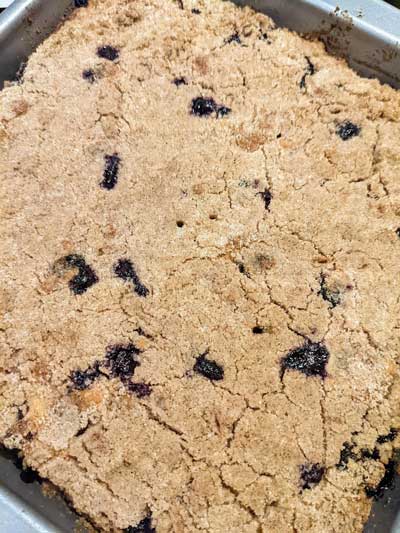 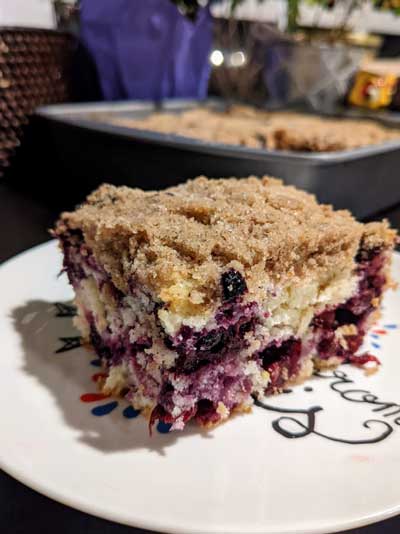 Firstly, I’d like to congratulate myself on finally getting a streusel topping right! It probably helps that I invested in a pastry cutter for the first time; I highly recommend that kitchen tool to any serious baker.

Secondly, I discovered that the eggs had somehow gone missing from my refrigerator, so I was forced to substitute the egg in this recipe with a quarter cup of buttermilk instead. I think that worked out pretty well, though, as this is a lemony cake, so there was no odd clash of flavors. Which flavors, frankly, were really great here, with the blueberries and cinnamon streusel both providing a nice counterpoint for the lemon. This was a really tasty cake that’s just fancy enough for company but not too difficult to prepare in a pinch.

Next week, we travel up the coast to bake a deliciously simple treat while tracking down a murderer hiding behind the supernatural. Do join me!