Time to check out the beginning of a delightful culinary cozy mystery series by one of my favorite authors! I came to this series a bit later in its run and am so thrilled to get a chance to go back to its very start here for this column.

Thirty-something artist Maggie Crozat has returned to Pelican, Louisiana, after a bad breakup that left her ex-boyfriend with pretty much everything they’d built together back in New York City. Now, she helps her parents and grandmother, fondly called Gran’, run a bed and breakfast out of their ancestral home while painting souvenirs and working docent shifts at another former plantation to make extra cash.

Their latest slate of B&B guests is the usual handful, including two honeymooning couples, an Australian family, a trio of frat boys, and a group of Cajun culture groupies. By far the most obnoxious guest is one of the honeymooners, an older man named Hal Clabber, who is far crankier and more demanding than warranted. When a summer storm and the ensuing blackout cause his heart to give out, the whole B&B is rocked by the tragedy. But when his wife Beverly drops dead as well almost immediately after, shock swiftly turns to suspicion that either one or both of their deaths was due to murder most foul.

Chief of Police Rufus Durand has long had it in for the Crozats due to a longstanding feud between their families, both descendants of Cajun aristocracy. He’s positively gleeful at the thought of impeding their livelihood while he investigates the Clabbers’ deaths. Fortunately, a new and far more professional police detective has arrived from Shreveport to replace the one retiring soon. Unfortunately, Detective Bo Durand is Rufus’s cousin.

Unwilling to leave the fate of her family’s fortunes to someone as openly hostile to them as Rufus is, Maggie begins snooping around in her guests’ belongings in order to figure out if any of them had a reason to off the Clabbers. She soon discovers that nearly all of them have ulterior motives for being in Pelican—and that one of those motives is murderous indeed. But can she trust Bo to do what’s right, and can she trust how her own emotions seem to be drawing her towards his embrace?

I loved this charming debut, with its rich plot and cast of characters and just the perfect touch of romance! Ellen Byron deftly weaves together the many plotlines and motives to build a wildly entertaining tapestry that also showcases so much of Cajun culture and heritage. Included in this tapestry, of course, is the addition of three recipes at the end of the book of dishes featured in the narrative. I decided to try out Maggie’s mom’s specialty dish.

¼ tsp. cayenne pepper (subtract or add more, depending on your taste for spicy)

(Note: if your Cajun seasoning has salt, you may want to reduce the ½ tsp. sea salt. You can always add more if you feel it’s needed.) 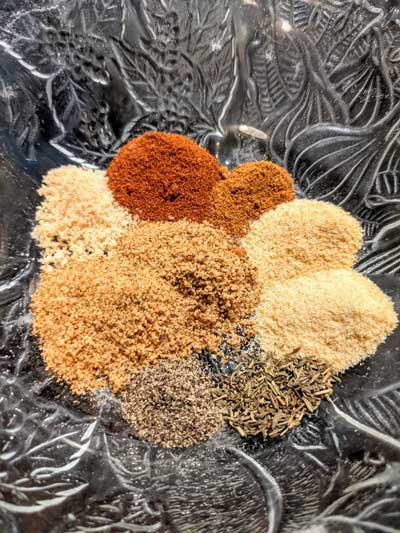 Warm two tablespoons of olive oil in a skillet on a medium flame, and add the okra and red pepper. Cook until softened, about five minutes. Turn off the heat and add the crawfish, stir so it absorbs some of the vegetable’s warmth.

Cook the penne until it’s al dente, and drain. Toss it with the remaining oil and the herb/spice mix.

Add the crawfish, okra, and red pepper, and toss gently. 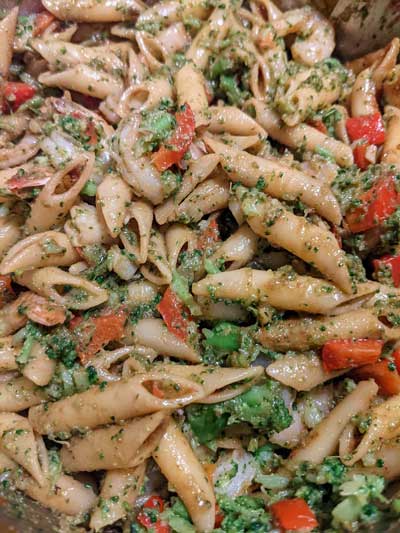 So I sent my husband to the grocery store here in Maryland to get all the ingredients, and while I do believe that he couldn’t find any gumbo filé or crawfish, I think his personal tastes leaned towards getting broccoli over okra, the latter of which he claimed he couldn’t find either. While I would have preferred okra myself, the broccoli and shrimp substitutions worked out just fine in this tasty pasta.

What I’m not so certain worked as well was my substitution of Cajun roux for the filé. While the internet definitely recommended using roux in lieu, it was surprisingly unhelpful as to exactly how much roux I ought to use. After scanning several sites, I settled on using a half cup of the roux. The end result was very tasty, but I worry that it isn’t exactly the flavor profile intended. One of these days, hopefully, I’ll get my hands on an authentic version for comparison!

Next week, we check out Ms. Byron’s latest mystery, written under a different name, while whipping up another delicious seafood pasta. Do join me!