Pieshop owner Val Harris is in for a big surprise when her sprightly octogenarian piecrust maker and landlady, Charlene McCree, forgets to tell her that the bluff her minihouse rental stands on is also the site of an annual Goddess Girls gathering. As a giant yurt and other amenities are thrown up right outside Val’s door in the wee hours of the morning, Charlene herself shows up in order to whisk Val off to her second surprise of the day. Apparently, Charlene has invited the crew of television reality show Pie Hard to turn around the fortunes of their restaurant/bakery, Pie Town—never mind the fact that Pie Town is doing just fine, or so Val defensively claims.

Pie Hard’s two hosts, on the other hand, have a differing opinion. Suave Nigel Prashad is the business-side consultant and doesn’t need very long to ascertain that Val has already overextended the pie shop more than is considered prudent in its first year. Meanwhile, beautiful, aloof celebrity chef Ilsa Fueder is highly critical of the pies themselves, putting her on an instant collision course with Charlene. Most of Pie Town’s regular customers are starstruck by the appearance of the television cast and crew, with Ray—one of Val’s best customers and friends—visibly mooning over Ilsa, much to the consternation of his maybe-girlfriend, Henrietta.

So when Ray calls Val in a panic a short while later, telling her that he just witnessed the death of one of the crew members, she doesn’t hesitate to jump in her van to race to his side. Ray had been taking a walk on the beach when he saw Regina, Pie Hard’s bossy producer, plummet to her death from the cliffside next to the swanky Belinda Hotel. Being an engineering major familiar with forces and angles, he’s convinced that she didn’t fall. In fact, he’s certain that she was pushed.

While Val’s own maybe-boyfriend, police detective Gordon Carmichael, is willing to listen to Ray’s story, his boss, Chief Shaw, is all too ready to chalk up Regina’s death to suicide. But when a series of criminal acts keeps plaguing the Pie Hard crew and Pie Town itself, it quickly becomes clear that a killer is indeed on the loose—and that Val might very well be next on the hit list.

Complicating things further is the appearance of a man who claims to have an important role in Val’s life. Could he hold the answers to everything that’s been happening, or will he just make everything worse for our already beleaguered heroine?

Wow, I really enjoyed this installment of the Pie Town Mystery series! Smart and sensitive, it thought-provokingly delves into Val’s past in order to resolve some of her present-day issues while laying the groundwork for future stories. The new characters introduced here are also really awesome, and I especially enjoyed Maureen and her influence on Val’s health.

As always, there were delicious pie recipes included at the back of the book. All three recipes were sweet this time around, and after some thought, I decided to try this one: 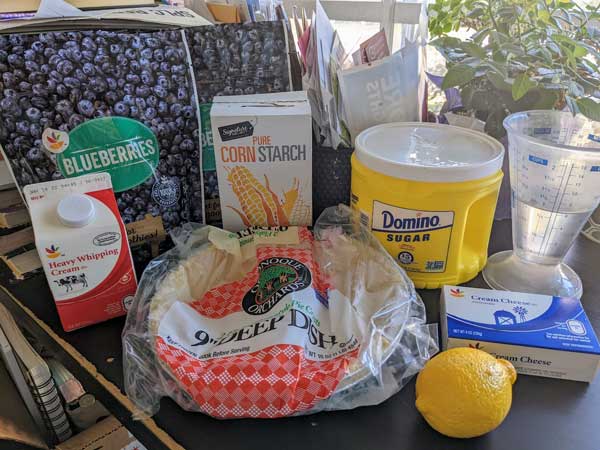 Heat oven to 450 degrees F. Line pie tin with crust. Poke it several times with a fork. Layer dried beans inside it (this will keep it from puffing while baking). Bake for 10 minutes. Allow to cool completely and remove and discard dried beans.

Combine ingredients for blueberry sauce in a medium saucepan. Bring to a boil over medium heat, stirring constantly, and cook until the mixture has thickened (approximately 5-7 minutes). Allow to cool completely.

In a mixing bowl, beat the whipping cream until stiff peaks have formed. Add cream cheese and sugar. Beat mixture until it’s smooth, then add lemon zest and lemon juice and beat until that’s smooth too.

Pour the cream cheese and lemon filling into the crust and spread it around evenly. Spoon the blueberry sauce on top of it and smooth it around. If you like, garnish with additional lemon zest or lemon curls.

Refrigerate for at least 2 hours before serving. 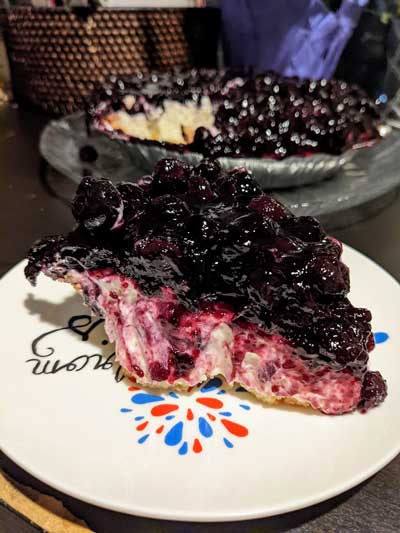 This was a delectable fruit-filled dessert that feels surprisingly light on the palate. I enjoyed the contrast between the sweetness of the blueberry with the tartness of the lemon as well as the play of textures between the fruit, the cream, and the crust. Speaking of which, I didn’t have any pie weights to keep my crust flat, so it did bubble up a little despite pricking. But I don’t think it had a negative effect on the end result at all.

And with that, we’re all caught up with the Pie Town series in this column to date! We’re going to explore another of Kristen Weiss’s culinary cozy series starting next week, with an interesting twist on a traditional baked good. Do join me!