Cooking the Books: Palace of Treason by Jason Matthews 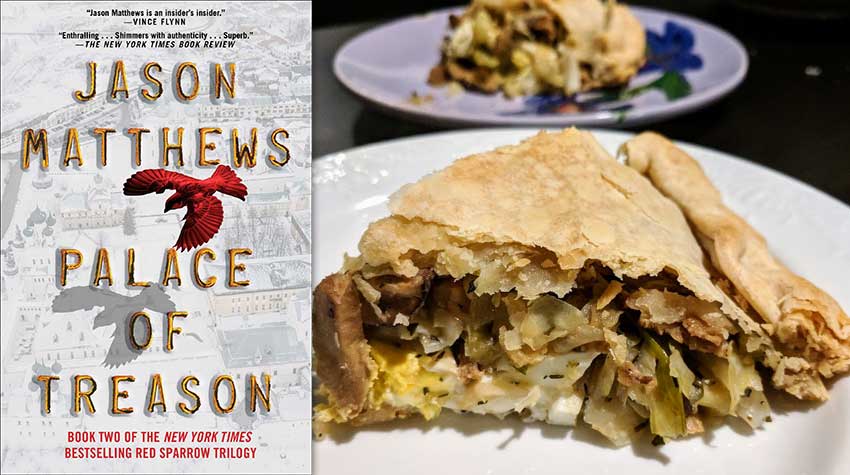 Captain Dominika Egorova—the Red Sparrow of the series title—is back at her Moscow desk in the Russian Intelligence Service (SVR) after conspiring with the CIA to cement her role as their high-level informant. Though, after the final events chronicled in the previous book, she’s not too sure about whether she wants to keep feeding them information—her romantic feelings for her American handler Nate Nash notwithstanding. She’s given plenty of time to think, however, as Nate and his bosses want her to continue building up trust within the SVR and have left it up to her as to when she contacts them again.

To this end, she initiates a semi-hostile recruitment of a nuclear scientist from Iran, ostensibly a Russian ally. She wants to make sure that Russia is kept abreast of the technological developments of a country viewed as a client state, a position that is encouraged by President Vladimir Putin and his oligarch cronies, who are all too happy to enrich their personal bank accounts from her efforts. This self-serving greed combined with the assassination attempts against her person sent by her paranoid boss Alexei Zuganov reaffirm her decision to protect her motherland from its rapacious politicians and psychotic apparatchiks. She reaches out to Nate, who almost immediately involves her in the protection of another double agent, even as she has to fend off the growing interest of President Putin himself.

There was a lot going on in this dense, fast-paced spy novel that traveled the world to locales exotic and, particularly to me, familiar. The descriptions of Washington, D.C., had me constantly thinking, “Oh, I know exactly where that is!” They also had me thinking fondly of previous adventures I’ve had in the city’s lesser-known neighborhoods and attractions. I also enjoyed Jason Matthews’s sense of humor and sharp ear for dialogue. His dedication to grounding his story in realism is palpable, and I loved how each chapter ended in a recipe—like 41 grace notes to a book chock-full of evocative descriptors already.

This week, I decided to try out another decidedly Russian dish, in the form of this vegetable pie. As with the first book, the printed recipe is devoid of precise amounts, so I’ve included my own measurements after:

Spread cream cheese on the bottom of a pie shell, cover with a layer of sliced hard boiled eggs, and sprinkle with chopped dill.

Add the cabbage-onion-mushroom mixture and seal the pie with the pastry top. Bake in a high oven until the pastry is golden.

*These are the ingredients and measurements that I came up with for this pie. 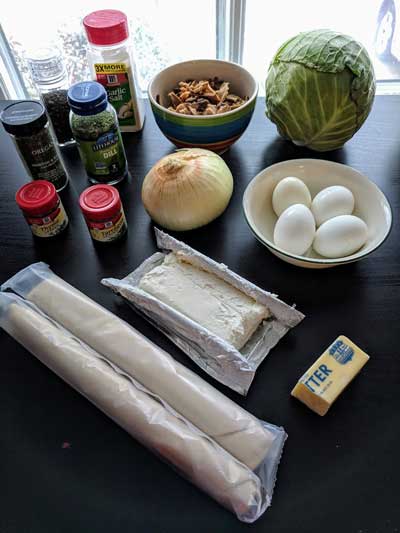 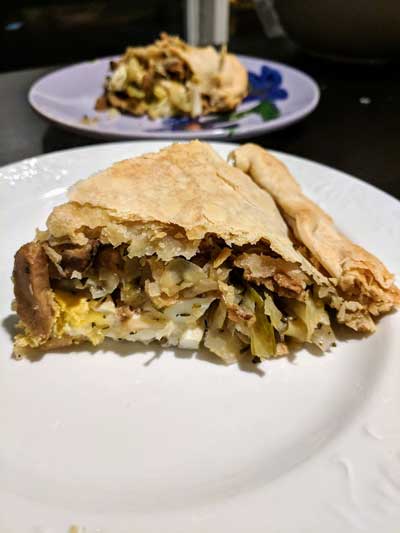 I used store-bought pie crusts, but you are absolutely welcome to make your own! That’s the beauty of recipes like these: so much scope is allowed for personalization—with the flip side, of course, being that prepping can be a (pun intended) bear. I did not measure out how much of each herb I used, opting instead to season straight from the containers, but the pie probably could have withstood even more aggressive seasoning than I subjected it to. I baked the pie at two different temperatures: 400°F for 15 minutes first, then 350°F for 25 more. This pie does taste better cold than hot, and it can taste a bit odd to people like me who are used to their pie fillings being all melded together, whether in a pot pie or a hand pie or even a quiche. The layers in this are quite definite and, while delicious, took me a bit of getting used to.

Next week, we travel to the American Midwest as I get my hands on the latest in one of my favorite culinary cozy series. Hopefully, I’ll find the answer to the cliffhanger of the previous book as I bake some delicious cookies! Do join me!