What better way for teashop owner Abigail Beanblossom to avoid the New Age, itinerant mother who’s only recently blown back into town than by involving herself in solving yet another murder! Granted, she and her business partner, Hyperion Night, have been invited to assist in unraveling the truth behind the death of an unpopular party person by the prime suspect in his murder, their journalist acquaintance, Archer Simmons, who doesn’t believe that the local police force is as good as it claims to be. Or, at least, not as good as Abigail and Hyperion are when it comes to figuring out whodunnit.

Archer is a friend of Abigail’s beloved grandfather as well as a society reporter who’s an integral part of San Borromeo’s upper crust. His new-money neighbor, Tom Henderson, had been the bane of their wealthy neighborhood, hosting loud, flashy celebrity parties that were seriously dragging down not only the local tone but property values as well. When Tom is found dead after plummeting from his balcony in a manner that cannot have been accidental, Archer is one of the few people with the unfortunate trifecta of motive, means, and opportunity for his murder.

Unsurprisingly, Archer protests his innocence, and Abigail and Hyperion are more inclined to believe him than not. Turns out that Tom was not lacking in people who wanted to see him dead. Besides upsetting his neighbors, he had a bad habit of stiffing people on bills, including Abigail’s handyman neighbor, Brik. Uncertain of her own relationship with the handsome Brik, Abigail isn’t sure how much she wants to press when she and Hyperion discover more about his past than they’d anticipated.

Of course, Abigail’s mother, Lisa—or Leaf as she’s now calling herself—has no interest in being sidelined. While she’s more than happy to dodge having serious conversations with Abigail about essentially abandoning her daughter as a child, she’s not about to refrain from meddling in the investigation, all the while lecturing Abigail and Hyperion about the benefits of unclogging their chakras, eating clean, and living in the moment. Will her interference ultimately do more good than harm, or will it endanger her daughter’s life even more than it has their already fragile relationship?

This was another fast-paced, hilarious cozy mystery that showcased Kirsten Weiss’s talent for whip-smart conversation and indelibly modern set pieces. The flash mob was a mortifying hoot, and it took me until the very end of the book to realize the related, multi-layered pun in the title. More seriously, I’m thoroughly intrigued by the developments in Abigail’s relationship with Brik, and I love the realism that underpins all the murderous suburban shenanigans.

Oolong, Farewell included recipes for three of the scones described so deliciously within its pages. I decided to try out this one: 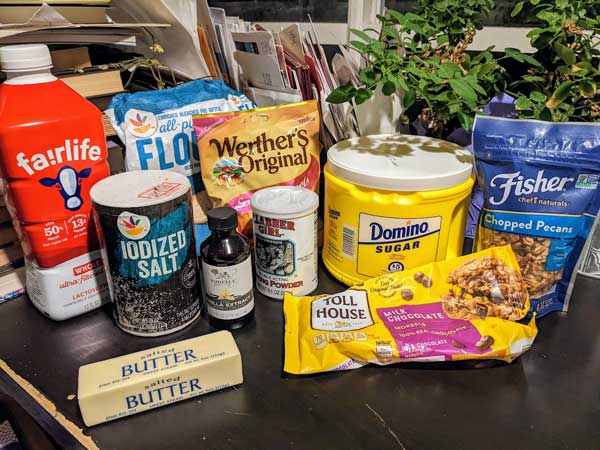 ½ cup pecans, for sprinkling on top of scones

Mix flour, sugar, baking powder, and salt in a medium-sized bowl. Cut butter into cubes and mix into the flour mixture with your fingers, crushing the butter, until the mix is coarse and sandy.

Add milk. Stir until almost combined. Add chocolate and chopped pecans and mix. You may need to add extra milk, a tablespoon at a time, until the mix is incorporated.

Knead dough in the bowl. Roll out to 1” thick. Cut circles 2 ½ inches in diameter, or cut into triangular wedges 2 ½ inches at the base. Bake on ungreased cookie sheet until light golden brown. Circles take approximately 15 minutes. Triangles will usually take 20-25 minutes.

To make the turtle topping, add caramels, milk, and salt to a small, heavy-bottomed saucepan. Cook over low heat, stirring occasionally, until caramels have melted (9-10 minutes). Bring the topping mixture to a gentle simmer and add the vanilla extract.

Simmer for an additional minute, then spread over scones right away. Sprinkle the remaining chopped pecans on top. 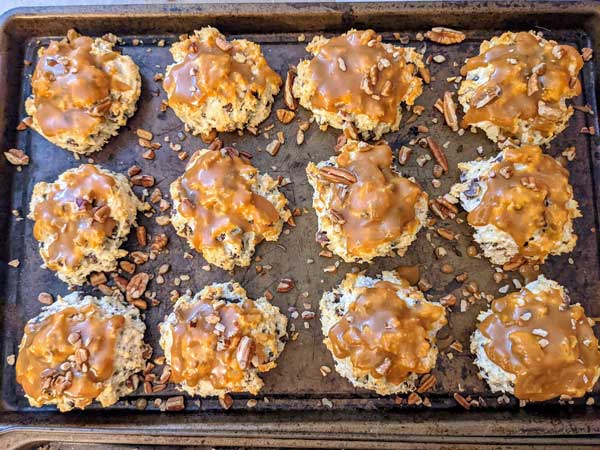 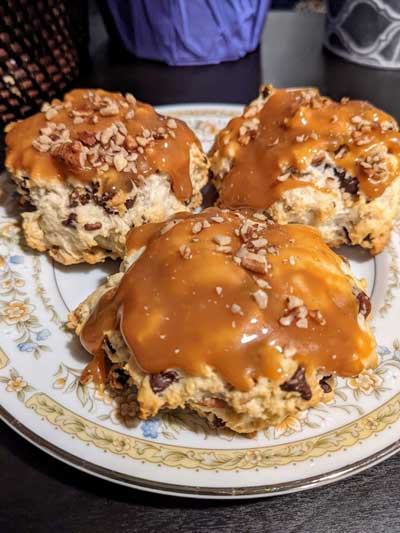 First of all, this was a great way to use up the many half-cups of chocolate chips I had left over from various other recipes I’ve made. I also used both caramel candies and caramel chips when making the topping. I actually waited until the scones were out of the oven and cooling before I started making the sauce, though in the novel Abigail starts it while the scones are still baking. It did take me far more than the 9-10 minutes in the recipe for the caramel to properly melt, so my scones were only slightly warmer than room temperature by the time the sauce was ready. I don’t think this affected the end result, though, as this was incredibly delicious. I love the combination of caramel and chocolate, and I loved even more that the scones weren’t too sweet overall.

Next week, we travel to the East Coast to cook up a savory if still sweet dinner dish while investigating another unlikely fall. Do join me!