Cooking the Books: One Feta In the Grave by Tina Kashian

The third in the Kebab Kitchen Mystery series is another page-turning culinary cozy, as summer festivities in Ocean Crest, New Jersey, are interrupted by murder. Our heroine, Lucy Berberian, is the manager of her family’s Mediterranean restaurant but has taken on the task of helping to organize the food and beverage portion of Ocean Crest’s weeklong beach festival. Her best friend, Katie Watson, works at town hall and is also heavily involved with the event in a role that necessitates her stepping in when two fellow judges at a sand sculpture contest get into a screaming match. Katie discovers that one of the judges, Archie Kincaid, needs to disqualify himself but only manages to get him to step down after engaging in several heated words with him herself.

When Archie is discovered shot to death beneath the boardwalk later on in the festival, suspicion falls on Katie—in part because the altercation at the sand sculpture judging wasn’t the only time she and Archie had gotten into it recently. Lucy hates that her friend is a suspect, fearing that part of Detective Calvin Clemmons’s interest in Katie is due to his animosity towards herself. Detective Clemmons is not a fan of Lucy’s sleuthing, despite or perhaps because of her success in solving two prior murders. But with the festival suspended until the murderer is found, businesses taking a hit from the loss of tourism revenue, and the homicide detective barking up the wrong tree, what’s a plucky amateur investigator to do but help find the real killer so that life can go back to the way it’s supposed to be?

One Feta In the Grave is as delightfully readable as the previous entries in the series, with a twisty mystery and a lightly steamy romance. The action is also well-balanced: Lucy might make some questionable choices in the course of her investigations, but she never knowingly puts herself into harm’s way, which makes it even more of a surprise when things take a turn for the violent. But not too violent—this is a culinary cozy, after all!

And as with other culinary cozies, this volume features three recipes of dishes featured in the story. Since I’m a sucker for lentil soup, I decided to try out this one: 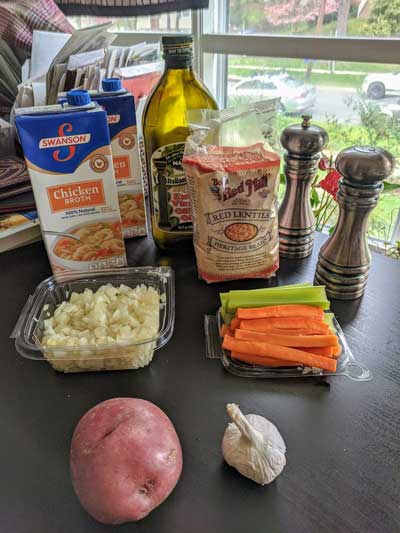 Add chicken broth and lentils. Cover and simmer for about an hour until lentils are tender, but not soft.

If soup is too thick, add ½ cup water to thin the broth. Add salt and pepper to taste. Serves four. 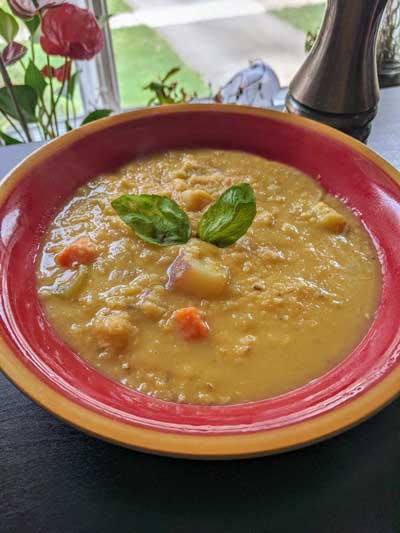 Oh, this did not turn out as well as it should have, and I feel like I owe Tina Kashian an apology for that! In my defense, my local supermarkets were out of brown lentils as people stocked up for social distancing, so I had to make do with red. I should, however, have checked in on my soup sooner, as I know that red lentils tend to go softer faster than brown, so that’s definitely all on me.

As you can see from the photos, I overcooked this, and while it was still tasty, it was definitely not the platonic ideal of a lentil soup that the Kebab Kitchen would proudly serve. After enjoying it as a soup on the first day—and in my opinion, that recipe definitely feeds more than four—I actually quite liked it as a flatbread dip on subsequent days. I shall have to try this recipe again with brown lentils the next time I have a craving for delicious Mediterranean soup.

Next week, we’re going to stick around the area and help Lucy solve another murder while making another versatile Mediterranean dish. Do join me!