Eight months have passed since the events of the last installment of the Kebab Kitchen Mystery series, with nary a dead body in sight—to the relief of our heroine, Lucy Berberian. She’s had her hands full running her family’s Mediterranean restaurant, so everything else has been on the backburner, including looking for a new apartment to finally move into on her own. When her real estate agent brother-in-law tells her he’s found her the perfect place, she jumps at the opportunity.

The apartment is in a great location, is only two blocks from the restaurant, has an ocean view to die for, and is listed at a surprisingly affordable price. But it also comes with a condition. Her landlady is the elderly Eloise Lubinski, who lives on the ground floor and has advertised for a tenant in order to help keep her grasping nephew Gilbert at bay. He wants to move her into a retirement home and sell her house for a tidy profit, and in an act that is at once defiant and an acknowledgment of her own limitations, she lets out her top floor to Lucy instead.

This, obviously, doesn’t go over so well with Gilbert, who doesn’t hesitate to tell Lucy exactly what he thinks of the situation. Worse, he shows up at a beach bonfire Lucy attends with her friends and starts throwing around more threats and insinuations, not only at Lucy but also at some of the other bonfire-goers. When Lucy’s friend, candy maker Melanie Haven, later discovers his dead body, the list of suspects with motive, means, and opportunity is unsurprisingly long.

So it’s a shock to Lucy when Detective Cal Clemmons focuses on Melanie as prime suspect. Apparently, Gilbert had owned the condominium building Melanie lives in and had been squeezing her for extra rent. Lucy is certain that Melanie is innocent, but she also suspects that Melanie is keeping dangerous secrets. When she sets out to clear her friend’s name, she’ll discover exactly how dangerous these can be.

This was another highly readable installment of the series, with drool-worthy food descriptions and the quality writing we’ve come to expect from Tina Kashian. There were also several new developments, not only in Lucy’s living situation but also in her relationship with her boyfriend, Azad. Series fans won’t want to miss out on what happens in these pages!

There were also three recipes included, and after last week’s debacle, I decided to choose the one that would be most difficult for me to mess up: 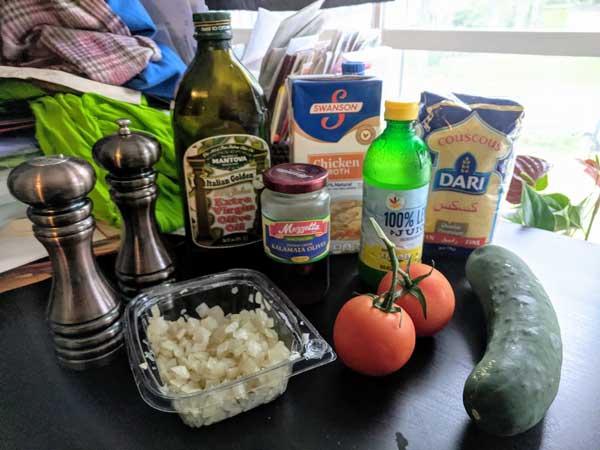 In saucepan, heat chicken broth to boiling. Stir in couscous. Remove from heat. Cover and let stand five minutes. Fluff with a fork. 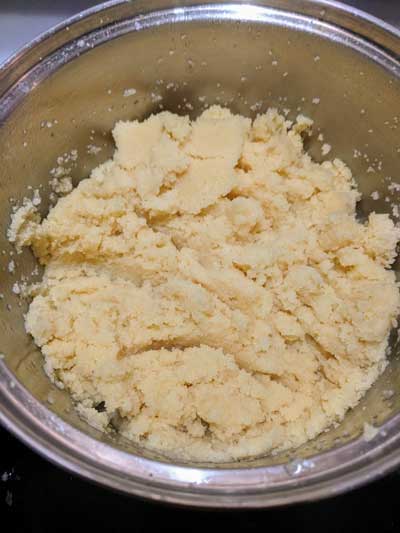 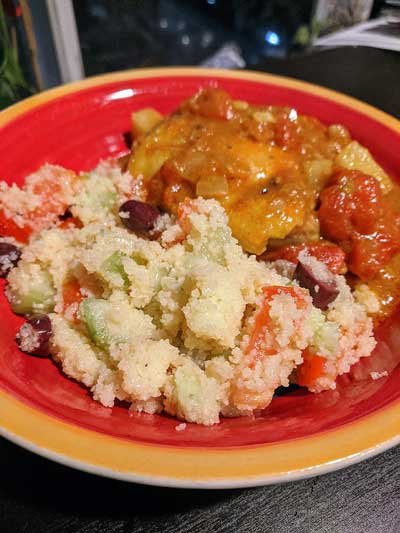 I love couscous in all its forms, but I’m used to serving it hot and plain (or with raisins) as a side dish. So this cold salad was a welcome addition to my culinary repertoire, even if I did end up serving it as a side dish with hot chicken curry. The contrast in temperature actually lent an extra layer to the meal, which was delicious and filling. Bonus points for not having to cook up an extra vegetable side, as this tasty salad had both the carb and veg components covered.

Next week, we head far inland and upwards to solve another dastardly murder but stick with the Mediterranean theme for making an Italian twist on a French staple. Do join me!

See also: Cooking the Books: One Feta In the Grave by Tina Kashian