Cooking the Books: A Murder Yule Regret by Winnie Archer

Ivy Culpepper is initially dismayed to hear that the already hard-working Olaya Solis, her boss at the Yeast of Eden bakery, has accepted a last-minute catering job. But when she hears that she’s been asked to photograph the swanky soiree in addition to helping bake and serve food, she’s much more amenable to the idea. Any exposure for her growing photography business is a good thing, after all, especially during the busy holiday season. Her excitement only increases when she learns that the party is being thrown by rising Hollywood star Eliza Fox, who turns out to be both charming and down-to-earth as she interacts with the catering staff as well as her party guests.

So the last thing Ivy or anyone else at the party expects is for piercing screams to shatter the festive atmosphere, as a server from another caterer discovers a dead body. Someone pushed intrusive paparazzo Edward Yentin from the top of the cliffside stairs that lead from the grounds down to the ocean. The party comes to a screeching halt as the police are called in and everyone on the premises is questioned as to what happened.

As Sheriff Emmaline Davis is Ivy’s best friend and sister-in-law, the two soon put their heads together to consider everything that’s transpired. Ivy overheard several odd conversations while working the party and doesn’t hesitate to tell Em what she heard, saw, and subsequently deduced. It seems that plenty of people at the party had a reason to get rid of Yentin, including their glamorous host herself. Friendly as Eliza seems, her personal life is a hot mess, and Yentin had been more than happy to stir that pot to his own benefit. But when a rival starlet hosts her own Christmas soiree and another partygoer is found dead there too, the stakes get even higher, as Ivy and Em must race to stop a cunning killer from murdering again.

This seventh installment of the Bread Shop Mystery series injects a serious dose of both Hollywood glamor and drama to the goings-on in the relatively quiet seaside town of Santa Sofia, California. There are twists and turns aplenty as Ivy digs into the investigation, trying to differentiate gossip from the truth and too often finding herself caught in the middle of serious family drama. Some of her conjectures are as outlandish as the personalities she’s looking into, but everything turns out fine in the end—with a special twist for romance fans!

There were four recipes included here, and I absolutely had to try this festive bread. 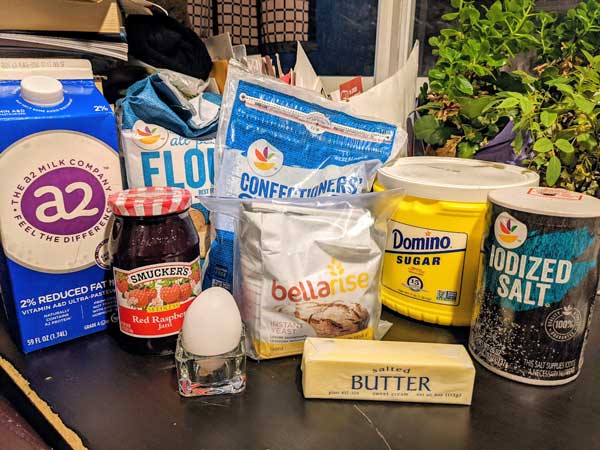 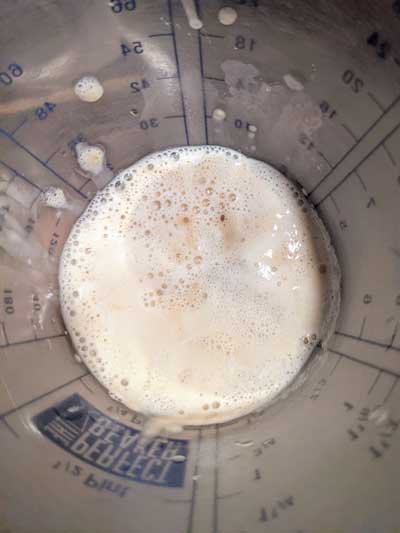 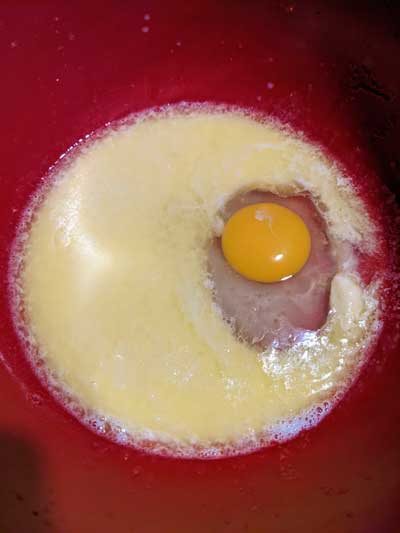 Add yeast mixture and 3 cups flour. Beat on medium speed until dough is smooth and sticky. Stir in enough remaining flour to form a soft dough.

Place dough on a floured surface and knead until smooth and elastic.

Place dough in a greased bowl, turning it to grease the top. Cover and set aside to rise until doubled.

Turn onto a floured surface and divide into four portions. Roll one portion into a 12-in. circle. Place on a greased 14-in. pizza pan. Spread with one-third of the jam to within ½ in. of edge. Repeat twice, layering dough and jam, and ending with final portion of dough.

Place a 2 ½-in. round cutter on top of the dough in center of circle as a marker only (don’t press through the dough.) 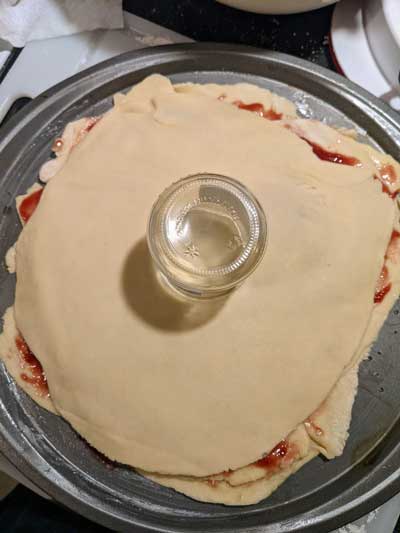 Using a sharp knife, make 16 evenly spaced cuts from the round marker to the outer edge of dough. This will form a sort of starburst. 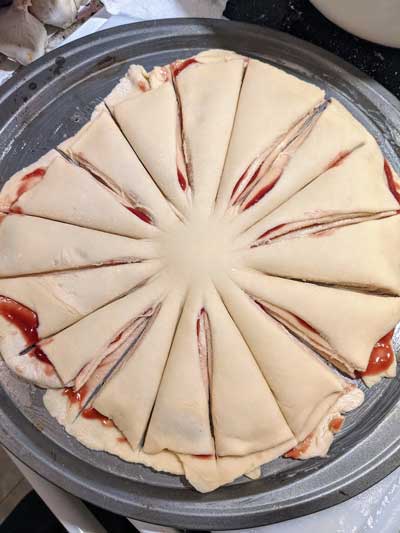 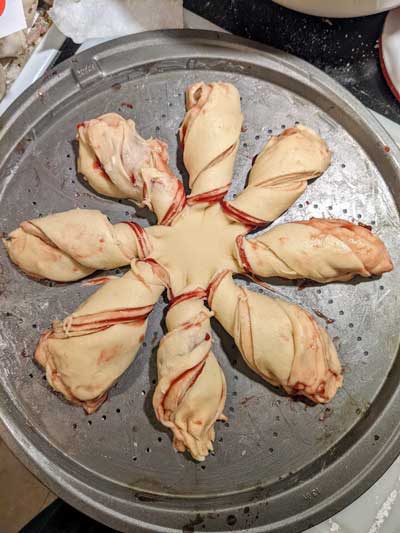 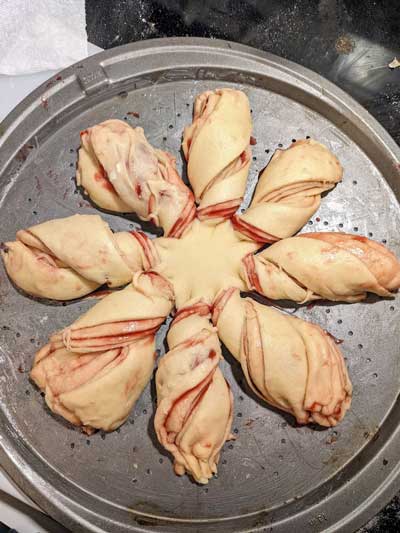 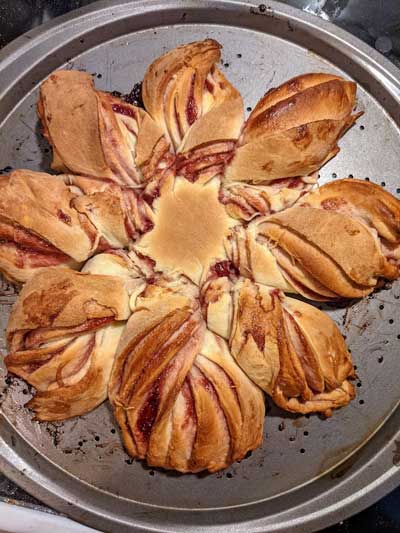 Remove from oven and immediately brush with melted butter. 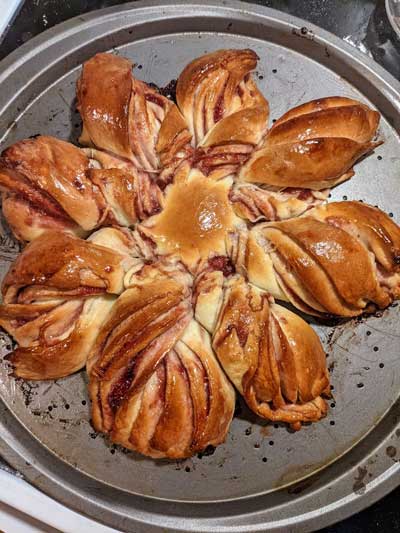 Cool completely on a wire rack, then dust with confectioners’ sugar. 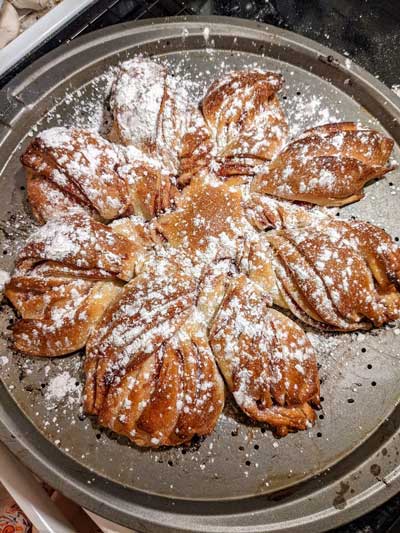 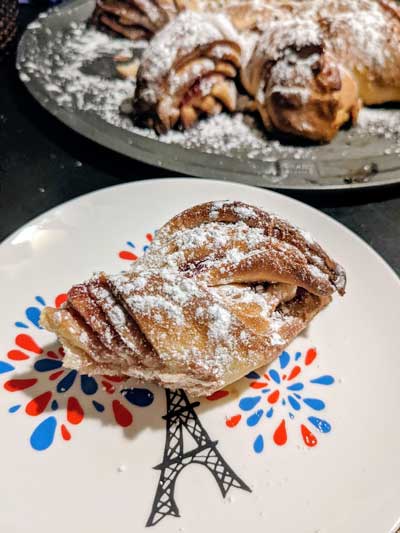 This is one of the loveliest things I’ve ever baked, and it’s honestly not too difficult to put together either! The recipe is terrific, breaking everything down into easy steps. The only thing I might do differently next time—and this was totally my oversight, not at all the fault of the recipe—is slather on more raspberry jam than I did here, as I didn’t actually measure it out of the jar and just eyeballed the amount I used. I’d also recommend using a pizza cutter for your starburst instead of a sharp knife, as it’s much easier and quicker to roll out the straight lines you need. This was such a beautiful and tasty treat that looks way more complicated to make than it actually was. I’m definitely breaking out this recipe again soon for my holiday table.

Next week, we stay in California to explore the start of another culinary cozy series I enjoy, investigating a suspicious death while baking up the quiche of my dreams. Do join me!

See also: Cooking the Books: Murder at the Lobstah Shack by Maddie Day