Cooking the Books: Murder In Tranquility Park by J.D. Griffo 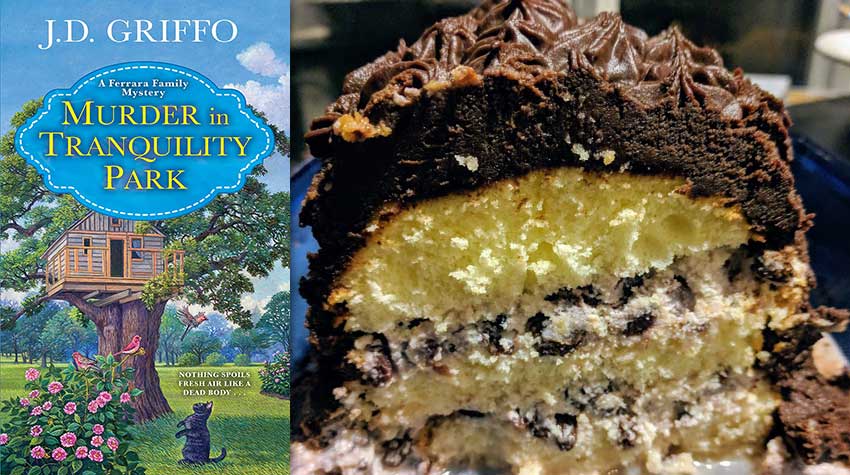 Imagine the Golden Girls starting a detective agency and you’ll get the general idea of J. D. Griffo’s charming Ferrara Family mystery series. Our main character, 64-year-old Alberta Scaglione nee Ferrara, enjoys living a life of unexpected ease surrounded by family in Tranquility, New Jersey. There’s her irascible sister, Helen, who recently left the convent to rejoin the laity, as well as her resourceful sister-in-law, Joyce, the fashionable artist who used to be a Wall Street stockbroker. Best of all, there’s her beloved granddaughter, Jinx, who’s aspiring towards a career in investigative journalism.

In this second installment of the series, Jinx and Alberta are going on an early morning jog in Tranquility Park when the latter thinks she sees movement in the secluded treehouse built long ago on park grounds. She puts it out of her mind until they pass the treehouse again on their way out of the park and spy a dead body at its base. At first, they think that the man must have fallen out of the treehouse to his death, but a closer look points to foul play. When they press their friend Police Chief Vinny D’Angelo for a toxicology report, they find that Jonas Harper was indeed poisoned.

Vinny doesn’t want the Ferrara Family Detective Agency—as the women call themselves—to meddle in police business, but when Jinx’s best friend and roommate, Nola, becomes the prime suspect, there’s no stopping them from investigating. Looking into Jonas’s life and untimely death will uncover decades’ worth of buried secrets and put more than one member of the Ferrara family in imminent peril.

I very much enjoyed Alberta’s musings throughout the novel as she reflects on the different approaches each member of her family has both to the investigation and to life in general. I was also pleasantly surprised by the complexity of the murder mystery and was rooting for the Ferraras throughout.

There were 4 recipes included in the back of the book, two of them vegan. While I was somewhat tempted to try out the vegan tiramisu, I chickened out and opted for the other dessert listed instead:

1 16 ½-ounce can pitted cherries–do not get rid of the cherry syrup!

Combine currants and 2 tablespoons of wine in a small bowl and soak for 15 minutes. Drain the cherries, cutting them up, and then drain the currants.

Puree ricotta cheese, sugar, the rest of the wine, and the heavy cream until smooth. Mix in currants and cherries in a larger bowl.

Refrigerate for about 2 hours so it can get firm.

Make the chocolate frosting by combining the cherry syrup, semisweet chocolate, and ¼ cup of wine in a saucepan. Stir over low heat until the chocolate melts, then remove the heat. Add unsalted butter and let it melt. Put the frosting in the fridge so it can thicken.

Put 1 cup of chocolate frosting into a pastry bag—do not let Alberta do this, she’s terrible at it—and spread the rest over the sides and the top of the cassata. Use the pastry bag to decorate the top of the cake with swirls and rosettes.

Refrigerate the whole shebang for a few more hours.

This is definitely a non-traditional cassata, even without the use of (delicious) Entenmann’s pound cake. I wasn’t too thrilled with the construction of the final product if I’m being perfectly honest. The bottom two tiers were delicious and moist, as they’d soaked up liquid from all the delicious filling, but the top layer felt very dry in comparison, which I felt threw off the balance of the cake.

I’m not sure if a solution would be to cover the top with a portion of the filling, as I’m uncertain of how well the chocolate would adhere to it after. Not that I was in charge of the chocolate on top. Those beautiful rosettes were all the doing of my lovely assistant, Karin. It was also a difficult cake to photograph well, though part of that is likely due to my continuing inability to properly frost a cake.

Next week, we travel north to tackle the first in a series before the impending publication of its latest installment and try our hand at another Italian classic. Do join me!