Murder at St. Winifred’s Academy finds the Ferrara Family Mystery series really hitting its stride. This fourth installment perfectly balances the hilarious and often chaotic personal lives of the Ferrara Family Detective Agency—which is really a club rather than an actual business—with an intriguing murder mystery set amidst the chaos and excitement of a local theater production.

When the youngest member of the Ferrara family summons the rest of the clan to her apartment to hear some big news, her grandmother Alberta and grandaunts Helen and Joyce jump to the most obvious conclusion. Their disappointment that Jinx isn’t announcing her engagement to her boyfriend, Freddy, is quickly swept away by her actual news though. Jinx’s roommate, Nola Kirkpatrick, is a theater director and producer with the local Tranquility Players troupe. Nola knew that Jinx’s grands would want to be the first to hear that their next production will be a revival of Arsenic and Old Lace starring the legendary Missy Michaels.

While Jinx knows that getting a celebrity for the play is a big deal, she has no idea how big until she sees the reactions of her grands. Missy was a child star who earned her place in viewers’ hearts with a series of movies starring herself as an orphan raised by her rich grandmother. Once grown, Missy married well and did the talk show circuit for a while but seemed happy to be done with acting otherwise. The news that she’s planning to restart her career with a low-stakes amateur theatrical production is huge, especially to the legions of fans who grew up adoring her.

But before Missy can meet any of them, she’s found dead in her dressing room, clutching a bottle of arsenic with a swathe of lace wrapped around her. Alberta immediately sees that Missy’s death tableau was set up to hide the fact that she’d actually been murdered. Alberta’s investigative instincts tell her that the murderer must be someone involved with the play, so she acquiesces to taking over Missy’s role in order to get closer to the truth. The show must go on, after all, even if there’s a murderer waiting in the wings to kill again.

This was a very fun installment of the series, with more red herrings than the similarly named signature drink the Ferrara women liberally pour. Every member of the agency is given a chance to shine as they utilize their various strengths and skills to bring a killer to justice. And having previously performed onstage myself, I thrilled to the atmospheric depictions of getting the play up and running, as will anyone else who enjoys the theater.

There were four recipes included here, with a gluten-free, non-dairy option as well. While I’m usually all about the full-fat, full-flavor dishes—especially when it comes to Italian food—I was intrigued enough by the concept of this healthy dish to give it a try. 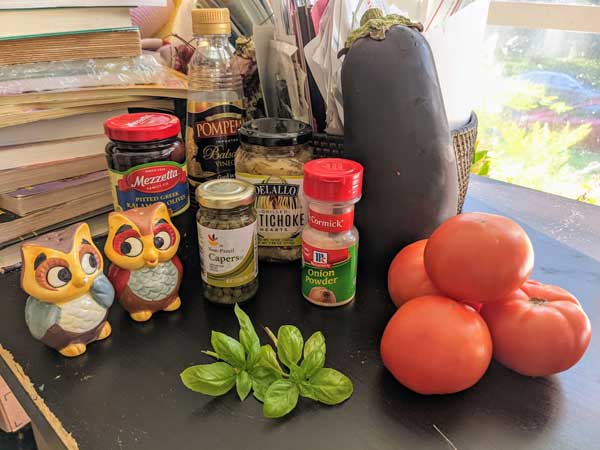 Slice eggplant in ½ inch slices. Drizzle with balsamic and sprinkle with salt and pepper.

Top each eggplant slice with the bruschetta mixture 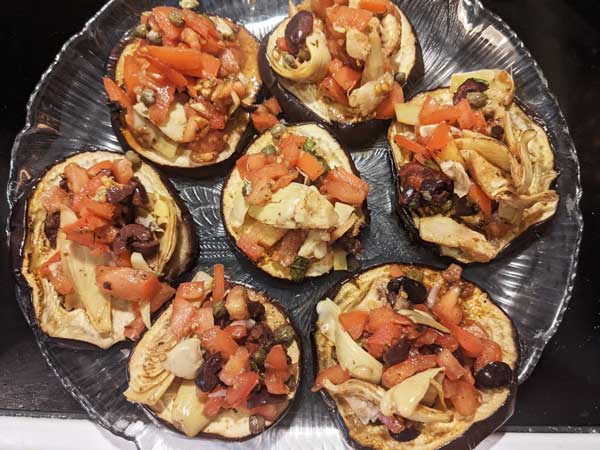 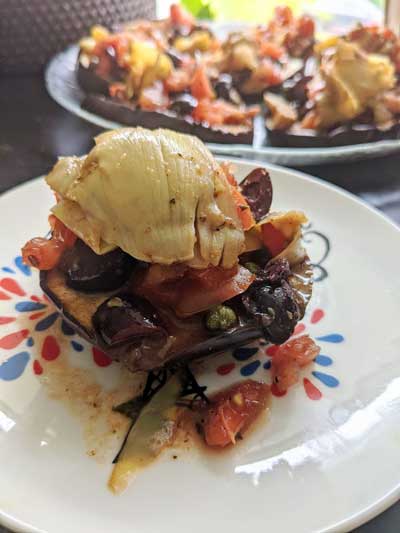 I love bruschetta, and I love eggplant, and this is absolutely a great option for the carb-conscious who enjoy Italian flavors but have to cut down on calories. The baked eggplant is a delightful substitute for bread, though instead of using fresh balsamic and salt and pepper before baking I just drizzled on some of the excess marinating liquid from the topping instead. I think it came out quite nicely that way, helping to meld the bruschetta flavors better considering how eggplant is far less absorbent generally than bread.

And I absolutely loved the topping; tomatoes and artichokes and olives and capers are my jam! The recipe calls for less than a whole jar of artichoke hearts, but I dumped in the whole thing, and you can absolutely tweak the recipe according to your tastes too. One thing I will note is that, overall, this tasted more like a composed ratatouille than a bruschetta, but I do think it’s hard to divorce the idea of that last from the taste of crisp bread. If, however, carbs are not for you, then this is a terrific alternative that’s also quite easy to make.

Next week, we travel further up the coast to bake a delicious breakfast casserole while investigating a corpse washed ashore. Do join me!

See also: Cooking the Books: Four Cuts Too Many by Debra H. Goldstein