Tea garden owner Daisy Swanson is thrilled to be donating her time to a social event meant to promote the building of a new homeless shelter in her small town of Willow Creek, Pennsylvania. With reports of homelessness in their area on the rise, kind-hearted Daisy wants to make sure that anyone who wants a place to get back on their feet can find the help they need. Unfortunately, her attitude isn’t shared by all her neighbors, including a group of masked protestors who show up to violently disrupt the proceedings.

Once the protestors are hauled off by the local police, Daisy tries—with some success—to keep the social going with the assistance of her tea garden staff and her boyfriend, Jonas Groft. It helps that she’s made a new friend at the social in the form of Piper Wagner, a young woman whose dreams of parenthood have recently faced a daunting setback. A mishap at the local Hope Fertility Clinic destroyed the embryos that Piper and her husband, Emory, had created after much tribulation. While Piper sees this as a sign to explore more paths to parenthood, Emory is intent on suing the clinic, to the point of getting into an altercation with clinic lawyer Hiram Hershberger. Fortunately or otherwise, Hiram is called away to the defense of one of the protestors, who turns out to be the ex-Amish Eli Lapp.

Jonas is pretty surprised at Eli’s involvement in the protest. He often hires the young man to work at his furniture store and has an overall positive opinion of him. So when Hiram is subsequently murdered and Eli is fingered as prime suspect, Jonas simply can’t believe it.

Daisy isn’t quite so quick to dismiss the idea. When the police are unable to determine Eli’s guilt and begin to widen their net to look into Piper and Emory as well, Daisy gets drawn into investigating herself. But when her efforts draw the wrathful attention of a killer, will a serious threat cause Daisy to back off from a case for the very first time?

This was another well-considered installment of the Daisy’s Tea Garden Mystery series, with slightly less of an emphasis on her extended family and a little more on her relationship with Jonas as well as her friendships with the various denizens of Willow Grove. As much as I hated to see Daisy experience trauma, I thought the depiction of her state of mind after she was attacked by the killer was both sensitive and convincing. Hunting killers is dangerous work, and Daisy handles it very well for an amateur.

There were three original recipes included here, and since I particularly enjoy Karen Rose Smith’s soup recipes, I had to try this one: 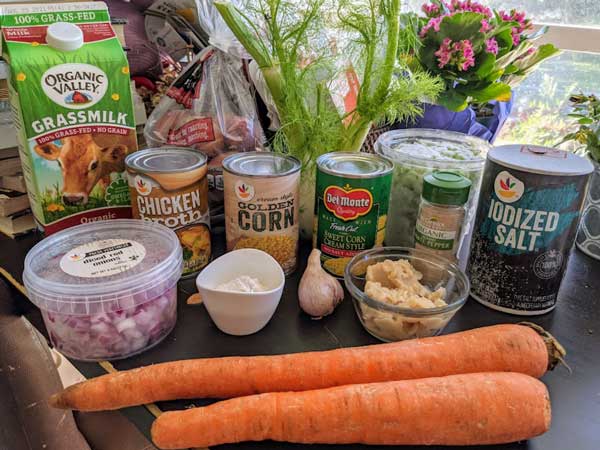 Saute onion in bacon drippings in a soup pot. Add chicken broth, carrots, celery, fennel, potatoes, can of whole kernel corn, garlic, salt and pepper. Bring to a boil and then simmer until potatoes are tender (about 15 minutes). Stir in creamed corn. Bring to a boil and stir. Return to simmer.

Whisk flour into milk and add to soup and stir well. Simmer 5 to 10 minutes, stirring now and then. 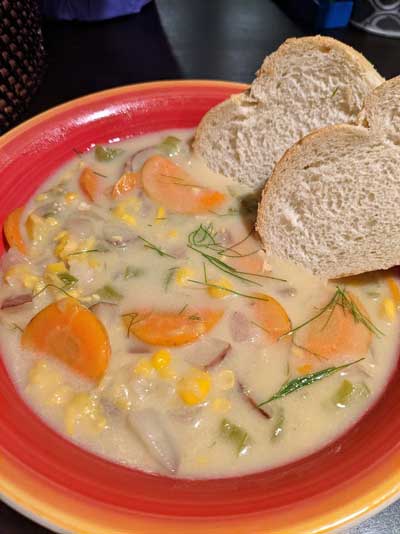 For the drippings, I used a mix of beef bacon drippings and duck fat, which definitely lent body to this hearty, mostly vegetable soup. There was a bit of a mix-up at the grocery store, and I wound up with two cans of creamed corn instead of one creamed and one kernel, but I think the end result turned out quite well regardless. I really enjoyed the addition of both fennel and white pepper to this soup, which added delicate frissons of flavor. My family enjoyed bowls of this with hearty slices of baguette for dipping. I would also recommend a little chopped bacon for garnish if you have any handy, though I just used a little dusting of fresh fennel myself.

Next week, we head north to bake some amazing cookies even as an act of apology misfires, resulting in a sleuth needing to solve a murder and clear her name. Do join me!