Cooking the Books: Murder at the Mistletoe Ball by J. D. Griffo

I love the ways in which this series has gone deeper into the psyches and relationships of the Ferrara Family it’s named for as it progresses, culminating in this excellent examination of mothers and daughters and what siblings owe one another, all with a murder mystery woven throughout. Murder at the Mistletoe Ball is almost as much family fiction as it is culinary cozy, and quite frankly, it excels on both counts.

Alberta Scaglione has long had a strained relationship with her only daughter, Lisa Marie, who moved away from New Jersey to Florida as a young married woman after a childhood and adolescence of squabbling with her mother. Lisa Marie’s daughter, Jinx, has since moved back to Tranquility, New Jersey, and founded the unofficial Ferrara Family Detective Agency with Alberta; Alberta’s sister, Helene; and their sister-in-law, Joyce—though, Lisa Marie and Alberta themselves have yet to reconcile. However, a card addressed to Alberta in Lisa Marie’s familiar handwriting asking for help gives the older woman hope that this state of affairs might be about to change, even as it raises questions as to what kind of help Lisa Marie needs.

Turns out that Jinx’s brother, Sergio, has gone missing after chasing his girlfriend, Natalie, from Florida up to New York City. He’s stopped responding to his parents’ messages, causing them enough anxiety to follow him north while inadvertently causing agita in Alberta and Jinx’s lives when Lisa Marie and her husband, in turn, neglect to return their concerned relatives’ texts and calls. The eventual family reunion, coinciding with the Mistletoe Ball that Joyce has worked so hard to organize, is less than joyous. Things go from awkward to awful when Natalie’s dead body falls out of a snowwoman decoration at the ball and Sergio comes forward holding a bloody knife.

Sergio is swiftly arrested for murder, even though he swears he would never hurt his beloved. The family rallies around to get him a good lawyer and start investigating the case themselves, but Alberta can’t help but wonder. Sergio has a violent temper and is no longer the sweet boy she once knew; has her estrangement from her family allowed them to change, and for the worse, since last they were all together?

This is a really great novel about family secrets, revenge, and reconciliation. I especially appreciate how J. D. Griffo even-handedly apportions responsibility for estranged parent-child relationships to both parties instead of falling into the trap of blaming only the side readers aren’t already familiar with. Series fans know and love Alberta, so seeing her parenting flaws brought to the forefront as well as seeing how that creates and continues to perpetuate a negative feedback loop with Lisa Marie gives us a fresh, humanizing perspective of our beloved protagonist. The murder mystery, too, is well-constructed, rendering this sixth installment the best so far of the Ferrara Family Mystery series.

There were four delectable recipes included, and I absolutely had to try this seafood pasta served for the Italian feast of the fishes. 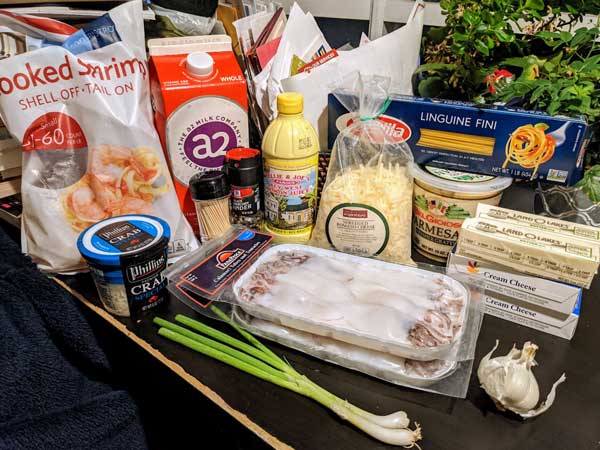 8 cloves of garlic, minced and divided

Preheat the oven to 350 degrees

Spoon some of the mixture into each calamari tube—Don’t overstuff!

Melt the butter in a saucepan over medium heat; stir in cream cheese and 2 cloves garlic

Gradually whisk in the milk and cook until heated

Remove from heat and stir in Parmesan and pepper

Pour over all of the calamari tubes

Sprinkle 2 tbs. of Romano over each one 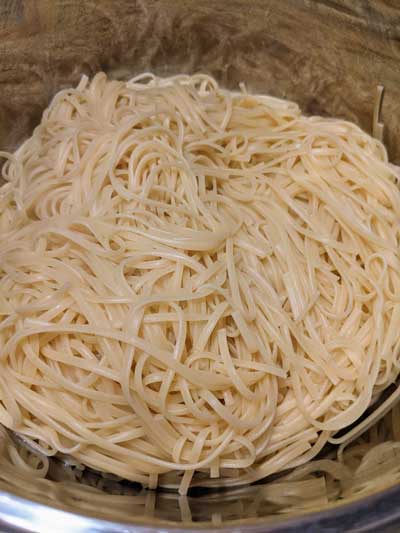 Place linguine on plate, top with stuffed calamari, and pour the sauce over everything 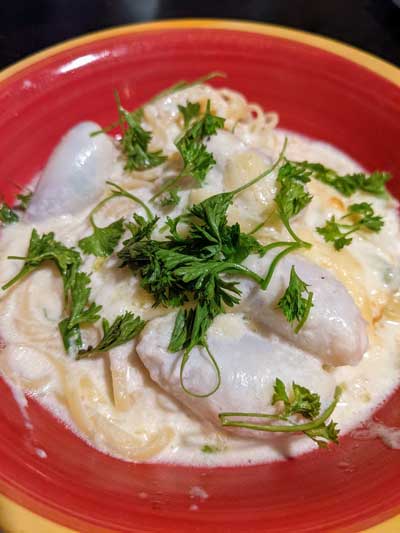 Next time I make this, I definitely need to buy larger calamari tubes. The ones I had were medium-sized, so they took forever to stuff. Fortunately, there were far more than the six I thought there would be in each packet, so I did manage to use up almost all of the filling (the rest I sprinkled with the calamari tentacles over the tubes before adding the sauce). On the plus side, the smaller size of the tubes meant I didn’t have to use the toothpicks after all. The filling stayed in perfectly, though I wonder if packing the tubes less densely would have allowed for the rich sauce to seep in, further integrating the flavors. This was so deliciously cheesy regardless and made for a lot of delectable pasta and sauce. It stores perhaps surprisingly nicely and reheats quite well too.

Next week, we head north on the east coast to make another savory seafood dish while investigating the murder of a woman with a complicated past. Do join me!