After the delightful debut novel of Christin Brecher’s Nantucket Candle Maker Mystery series, which featured a terrific manor-house-style murder mystery, the last thing I expected was for the follow up to turn into a spy thriller! But Ms. Brecher carries it off with aplomb, even if I did spend a good part of the proceedings wondering whether this was really an elaborate tale of international espionage or our heroine, Stella Wright, was being played by forces closer to home. You’ll have to find out for yourself, though, as I highly recommend checking out this ridiculously fun, page-turning series!

To recap: Stella is in Paris as Murder Makes Scents begins, on a trip with her mother to a perfumery conference that overlaps with a global Peace Jubilee summit. On the very last day of the conference, a man is publicly stabbed, an event that leaves Stella and her mother, Millie, shaken as they head home for Nantucket Island.

Millie, however, wants to focus on the future and Stella’s upcoming 30th-birthday celebrations. Stella is a bit wary—less of the milestone than of the societal pressure around it—but is quickly distracted by several really odd occurrences. First, her store is broken into but nothing is taken—at least, nothing she can tell anyway. Then, mysterious figures keep showing up in her orbit, and her mother suffers an accident and a note is left on her door warning her to hand over the formula her mother had carried back to the States or else. Stella would rather not treat the threat as a joke if it means her mother’s life is in danger, but soon it’s Stella herself facing mortal peril as she races around Nantucket trying to keep up with and uncover the shadowy figure pulling her strings.

This definitely wasn’t your typical cozy but still featured all the small-town charm and mystery-solving of the genre. I found it a terrific detour from the usual territory and was rooting for Stella all the way. I really appreciated the growing atmosphere of paranoia, leavened with Stella’s sense of humor, and I enjoyed the wild ride from start to finish.

The book also included tips, written in Cherry’s hilarious voice, on candle-making and molds as well as a recipe! 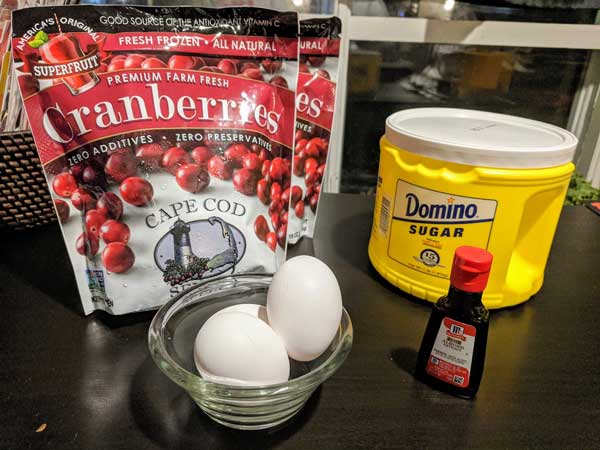 Place cranberries in a colander and rinse thoroughly to wash out seeds. Set aside. Beat 3 eggs well then add 2 cups of sugar. Continue to beat until well mixed. Add 3 tsp of almond extract. Add cranberries, mixing well. Set aside, stirring a couple of times while rolling out pie crust. 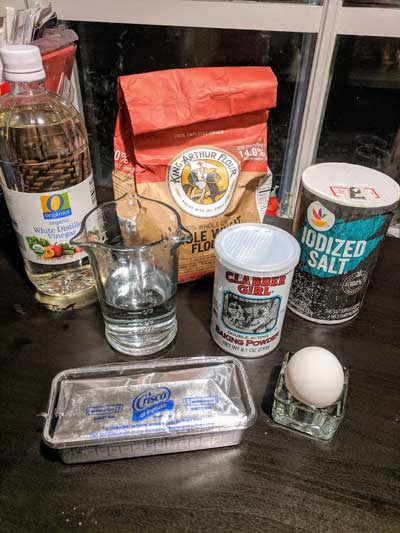 Mix together flour, salt, baking powder, and Crisco. Hands are the best tools for this. Add cold water, 1 egg, and 1 tsp vinegar. Mix well. Shape into 4 balls. Chill for ½ hour before rolling. Pie crust can be made ahead and frozen. Will keep up to 6 months in freezer.

If frozen, the balls will take about ½ hour to thaw enough to roll out.

Line two large pie plates with crust. Divide cranberry mixture between them. Place top crust over mixture, cutting 3-4 slits on top, and brush with a small amount of milk. 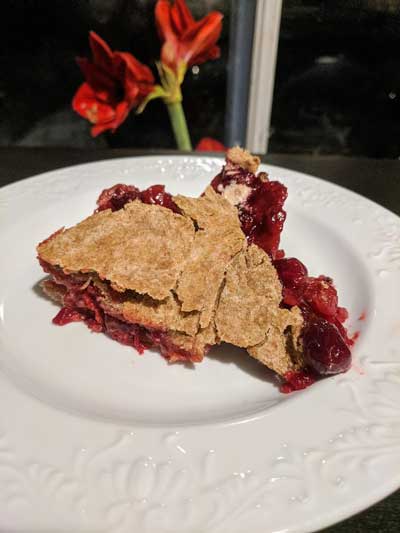 First, my apologies to Gram Scully; I haven’t yet found a pie crust recipe I can’t ruin for myself. It probably didn’t help that I decided to use whole wheat flour, which seemed a good idea at the time. It definitely didn’t help that I misread the recipe and used a cup less Crisco than I was supposed to!

I am going to try this pie crust recipe again in the future, but I freely admit that since I hadn’t the heart to throw out the entire thing, I wound up scooping the filling into store-bought pie crusts and re-baking them. The filling was so good, I hated to waste it, and I’m glad I didn’t! It tasted super delicious, even if I had to use frozen cranberries instead of fresh.

I love how the amount of almond extract balanced the tartness of the cranberries perfectly. I’m also seriously considering adding a layer of chocolate shavings the next time I try this, though, given how my whole wheat flour substitution was such a disaster, maybe I should just stick to what I know is good.

Next week, we travel north to investigate murder at a pirate festival while baking cookies for grownups, yar! Do join me!