Cooking the Books: Murder at the Lobstah Shack by Maddie Day

The third book of the Cozy Capers Book Group Mystery series starts out with a scene that could have been ripped from the pages of the very book our titular group of readers is currently enjoying (the very excellent Fogged In by one of my all-time favorite cozy writers, Barbara Ross, coincidentally). Our heroine, Mac Almeida, is getting ready to open up her bike shop one morning when she gets an urgent text from her neighbor Tulia Peters, who’s just found a dead body in her restaurant’s walk-in freezer.

The body belongs to Annette DiCicero, with whom Tulia—a member of the Wampanoag tribe—had recently had some very public spats over the idea of renaming Columbus Day to Indigenous People’s Day. But no one could possibly think that Tulia would kill Annette over that, even if one of Tulia’s custom lobster picks was found lodged in the dead woman’s neck. Mac and the rest of the Cozy Capers Book Group quickly rally around their friend and fellow booklover to get to the bottom of this mystery.

As the well-connected group gets to sleuthing, they discover that Annette had plenty of people who might have wished her harm. From her past as a pageant queen to her present as a hard-nosed accountant married to a man not known for his pleasant personality, Annette had unfortunately accumulated plenty of detractors. But who could have possibly hated her enough to kill her?

Mac’s investigations will bring her not only into the orbit of various shady types with axes to grind but also, thankfully, into far more charitable quarters. From the Quaker meeting house where she finds an unexpected lead to the homeless encampment that her beloved grandmother regularly visits, she discovers not only the many ties that bound Annette to the fabric of the town but also a greater sympathy for the deceased. Will finding justice for Annette put her own life in danger, though, especially with a tropical storm bearing down on the coastal town and providing cover for a desperate killer?

I very much enjoyed this compassionate culinary cozy that highlights the responsibilities of citizenship as well as the necessity of charitable efforts in caring for everyone who needs it. The mystery twists and turns, with some delightful shoutouts to other contemporary mystery novels that I also have enjoyed and recommend. And perhaps most engrossingly for series fans, Mac’s personal life continues to develop as she and her boyfriend, Tim, consider taking the next steps in their relationship.

Tim is such a dreamboat and makes for Mac the recipe that I decided to try out for this week’s column, of the six included here. It’s also a great pick-me-up, in my opinion, for your post-Thanksgiving-turkey hangover! 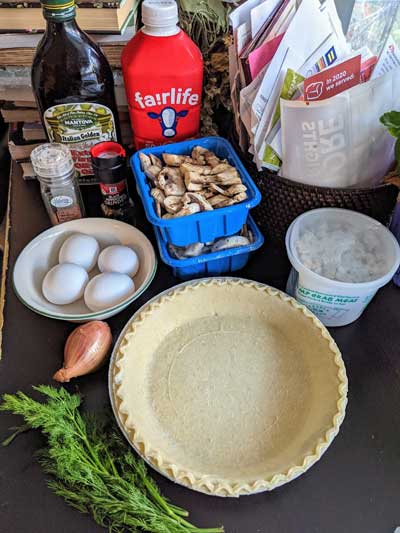 1 pastry crust, store bought or homemade from the recipe of your choice

Beat the eggs with milk, dill, salt, and pepper, and set aside. 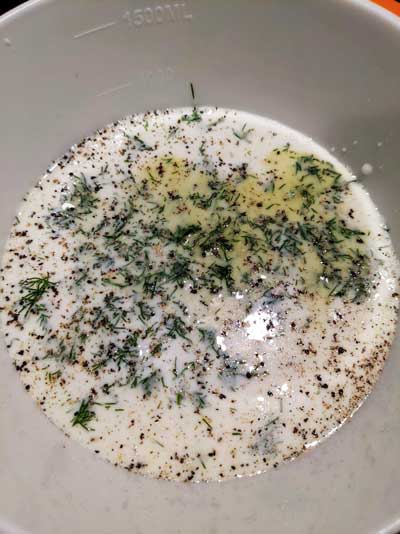 Heat the oil over medium heat in a cast-iron skillet. Sauté the shallots and mushrooms until limp. Remove from heat.

Set a baking sheet on the oven’s middle shelf. Slide the pie pan onto the sheet.

After 15 minutes, turn the temperature down to 350°F. Bake until the quiche feels set to the touch in the center and a knife comes out clean, 45-55 additional minutes. It should be golden-brown and slightly puffed and should not slosh when you jiggle it. 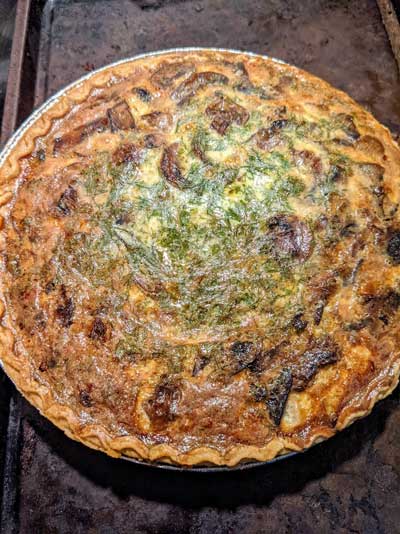 Let it set up for 10 minutes before serving hot. Can also serve at room temperature. 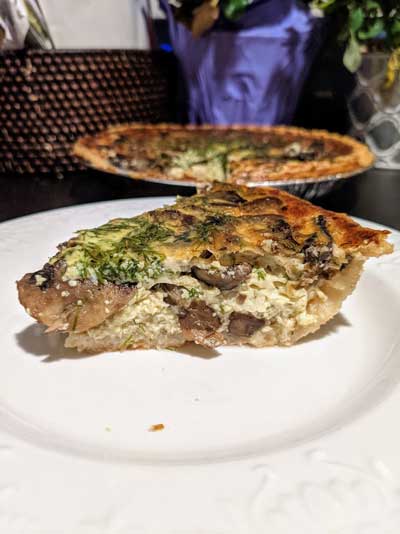 After haunting three different supermarkets, I had to admit defeat and buy crab meat instead of lobster for this quiche. Lobster would definitely have made for a richer dish, but crab substitutes in a pinch, especially if you get the lump variety. I did let my quiche brown a little longer than it probably should have, but this was still a delicious seafood dish that I absolutely gobbled up over the course of several meals.

One caveat: the recipe does call for quite a lot of fresh dill, which put off my husband, though he dutifully enjoyed his initial slice. I like dill so I didn’t mind, but you may want to adjust the quantity you use depending on your own preferences.

Next week, we go cross-country to investigate the murder of an unwanted guest, while baking up a lovely seasonal treat. Do join me!