Oh wow, I can’t believe it’s been 10 books (and several novellas!) in this series already! Muddled Through fast forwards almost a year from the end of the last book, with Julia Snowden still picking up the pieces after the end of her relationship with Chris Durand. They’d both agreed that it would be too difficult to work together keeping their restaurant open over the winter. With her landlord, Gus, needing the apartment he’d been renting to her, forcing her to move back in with her mom, Julia can’t help but feel as if she has very little to show for the last few years.

Being at a loose end comes in handy, however, when she sees police lights flashing outside Lupine Designs, the pottery store where her sister works. Julia races over and is relieved to find Livvie unhurt. The same can’t be said for the objects on display, though, as someone trashed the entire showroom before Livvie arrived to open up the store.

Julia is happy to pitch in to help Livvie and store owner Zoey Butterfield clean up the mess. Zoey is mystified as to who could possibly have held so much malice in their hearts as to threaten her livelihood in this way. She’s a relatively new transplant to the area, having moved to Busman’s Harbor only three years ago. Her ideas for town revitalization since then have met with strong resistance, coming to a head in a contentious town meeting over her proposal to turn four blocks of Main Street into a pedestrian mall on summer weekends. Could this vandalism have anything to do with her campaign?

When the violence escalates to murder, Zoey, originally a victim, becomes the prime suspect. Livvie is convinced that her boss is innocent and persuades Julia to start looking into the matter. Not that Julia needs much persuasion to stick her nose into the secrets of her beloved town. But as she uncovers long-buried secrets and much more recent indiscretions, she finds herself directly in the sights of a diabolical killer.

Julia is by far one of my favorite culinary cozy heroines—feeling more like a fully realized person than a fictional character—as she deals with the emotional fallout not only from her personal life but also from her bullish persistence in getting to the truth no matter whose feelings she might trample on in the process. The one scene where she confronted Zoey only to feel wholly offended by the outcome was so realistically awkward that I felt entirely mortified on her behalf. And I deeply love how her dogged sleuthing translates so poorly when it comes to matters of the heart—though it doesn’t help when Flynn insists on discussing himself in the third person after asking her to pick up dinner for them instead of getting it himself!

This was an excellent installment, and I can’t wait to read many, many more. But first, of course, I had to choose from one of the six recipes included here. I decided to try out this one for the column: 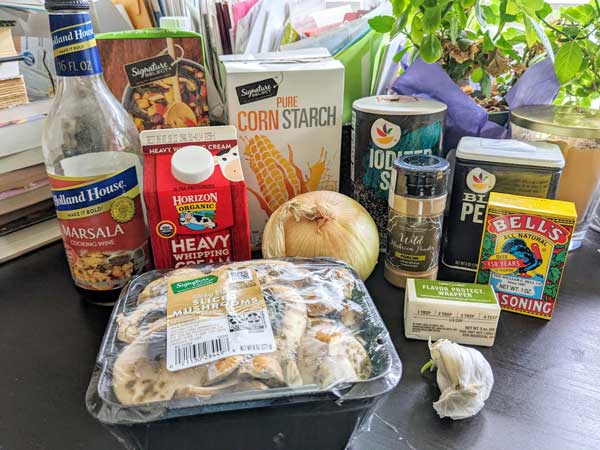 Add wine or sherry and cook 2 minutes. Stir in herbs, salt, and pepper.

Adjust seasonings, if necessary. Blend with an immersion blender leaving the mushrooms in small chunks. 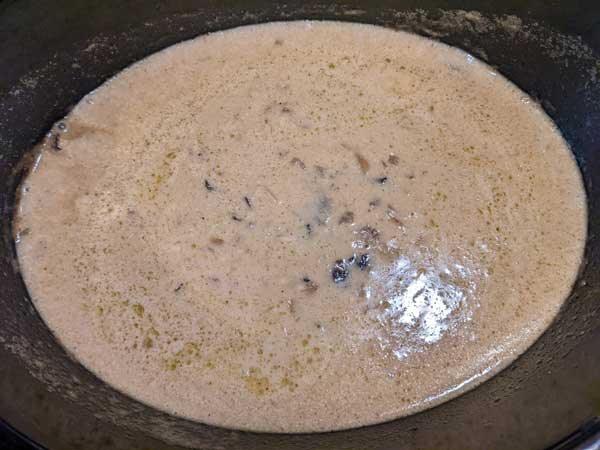 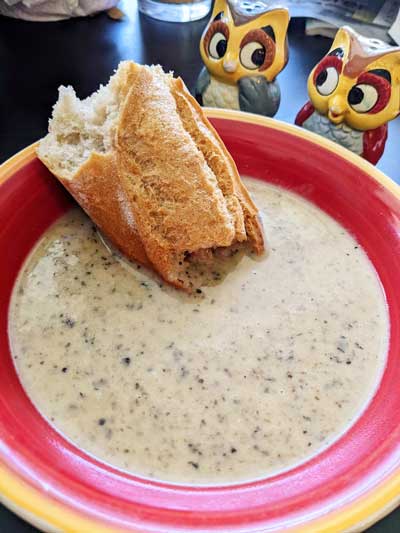 Wow, this is truly a restaurant-quality soup! That porcini mushroom powder really lends body to the entire dish. It also halves very easily if you’d rather make four servings instead of the eight this is designed to provide.

I did have to make a few substitutions, though. My husband could not find Herbs de Provence at the store, so I substituted Bell’s Seasoning, a New England favorite, instead. I also used a blend of leftover white wine with marsala because that’s what I had handy. Soups, I feel, should be a handy way to use up leftovers—a philosophy I believe Barbara Ross shares given that another of the recipes in this book is called Refrigerator Soup. I served the mushroom soup initially with some crusty baguette but found that I really liked it with a buttered, toasted cheese bagel dusted with more of the Bell’s.

Next week, we head south to whip up a few tasty cocktails while investigating a fatal poisoning. Do join me!

See also: Cooking the Books: Murder Is No Picnic by Amy Pershing