The seventh book in the Knit & Nibble Mystery series finds the small town of Arborville, New Jersey, once more rocked by murder. Young, beautiful Jenny Miller is found strangled to death near her plot in the community garden. Most curiously, the murder weapon was a circular knitting needle, which immediately draws the attention of the town’s main knitting, and occasionally sleuthing, circle.

Jenny apparently did not knit, and no one knows who the needle could have possibly belonged to. Marlene Pepper, the community garden administrator, is adamant that Pamela Paterson and Bettina Fraser, two members of the Knit & Nibble group with a knack for solving crimes, get to the bottom of this case too. According to Marlene, the community garden has been contentious enough an issue without a murder muddying things further in the court of public opinion.

As Bettina is a reporter for the Arborville Advocate, she’s more than happy to snoop around and ask a few questions, with quiet, thoughtful Pamela in tow. Pamela needs to be more circumspect than her brash friend, however, as her nearly-adult daughter, Penny, is due home from college soon and highly disapproves of Pamela putting herself in danger. But when suspicions fall on a possible new member of the knitting group, could danger be heading Pamela’s way regardless?

This was another entertaining fair-play mystery that featured some really terrific, quietly sensitive explorations of Pamela’s psyche. Widowed several years prior, she’s been cagey about dating again—something her daughter is starting to worry about. Pamela’s mixed feelings about not being alone while encouraging Penny to pursue her dreams are eminently relatable to any parent, single or otherwise.

As with all the other books in this series, there was a knitting pattern included as well as the following recipe, lightly edited for space: 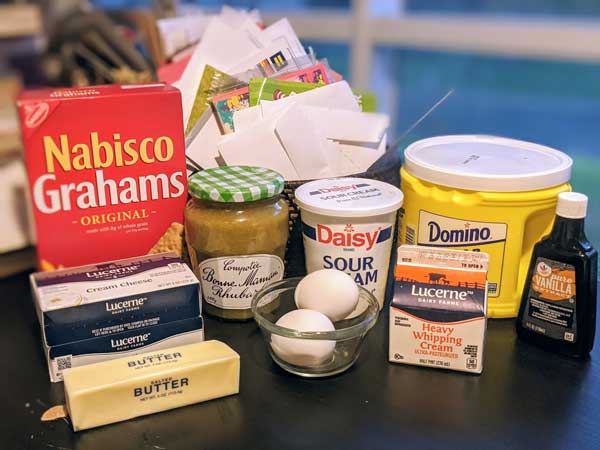 For the rhubarb compote:

For the graham cracker crust:

12 whole graham crackers (the rectangles, not the squares)

In a small saucepan, gently cook the rhubarb, ½ cup sugar, and 1 tbsp. water, covered, until the rhubarb is soft and jam-like, about 15 minutes. If the rhubarb is soft but the compote is still soupy, boil it at high heat with the cover off for a few minutes at the end. Remove it from the heat and let it cool while you work on the cheesecake. The compote can be made ahead and chilled or even frozen. If you freeze it, thaw it before adding it to the cheesecake.

Reduce the graham crackers to crumbs by putting them in a ziplock bag and rolling over them with a rolling pin. You will probably have to do this in two batches depending on the size of your ziplock bag. In a small bowl, mix the crumbs with 4 tbsp. melted butter and 3 tbsp. sugar until they resemble moist sand. Press them onto the bottom and up the sides of a pie pan using your fingers and the back of a spoon. Refrigerate.

With an electric mixer, beat the cream cheese in a large bowl until it’s smooth. Beat in ⅔ cup sugar, then the eggs and ½ tsp. vanilla.

Bake the cheesecake for 40 to 45 minutes or until the center is almost set and the edges are slightly brown. Let it cool and then refrigerate it for at least 3 hours. 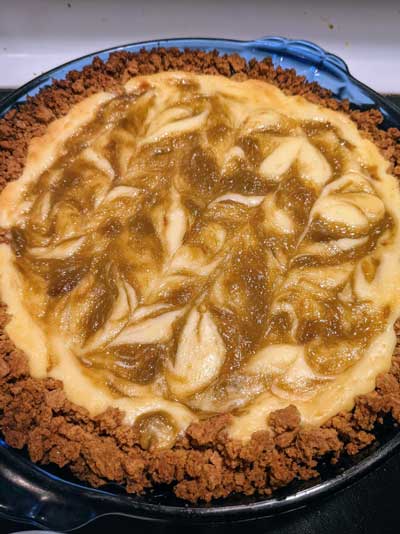 Pour the cream into a medium-sized bowl, add the sour cream and 2 tbsp. sugar. Beat on high speed until the mixture holds soft peaks. 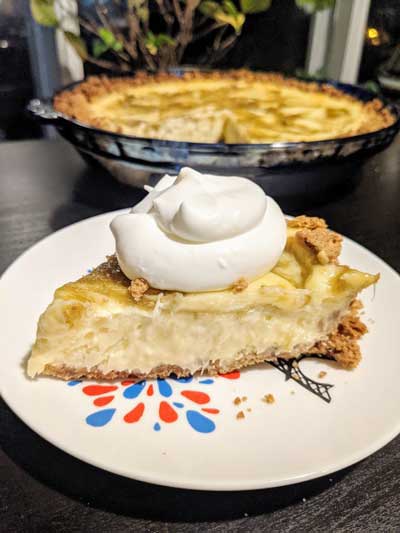 I could not for the life of me find rhubarb at the grocery store, so I settled for ordering rhubarb compote, which came as a (yummy) green liquid instead of the expected red. It still made for a lovely contrast, though, with the rest of the cheesecake pie. To make up for not making the compote from scratch, I decided to put together the graham cracker crust myself instead of using store-bought, as Peggy Ehrhart suggests in the book as a worthy alternative. I actually only realized that the pie pan I’d chosen for the dish was too small after chilling the crust, so I had to hastily reshape it into a bigger pan. I should probably have crushed the graham crackers more finely as well, but the crust turned out alright overall.

The real standout was the cheesecake filling with the rhubarb swirl! The tartness of the rhubarb compote cuts wonderfully through the heavy richness of the cheesecake, encouraged by the hints of sour cream in the whipped topping. I’m not a huge cheesecake fan, but this had me going back for seconds and thirds! This was definitely an unusual, tasty dessert to whip out the next time you want to make something out of the ordinary and a great use of rhubarb if you have it.

Next week, we head to the Midwest for an #OwnVoices debut that will have us baking Asian-spiced goodies while investigating murder. Do join me!