Cooking the Books: Knit One, Die Two by Peggy Ehrhart 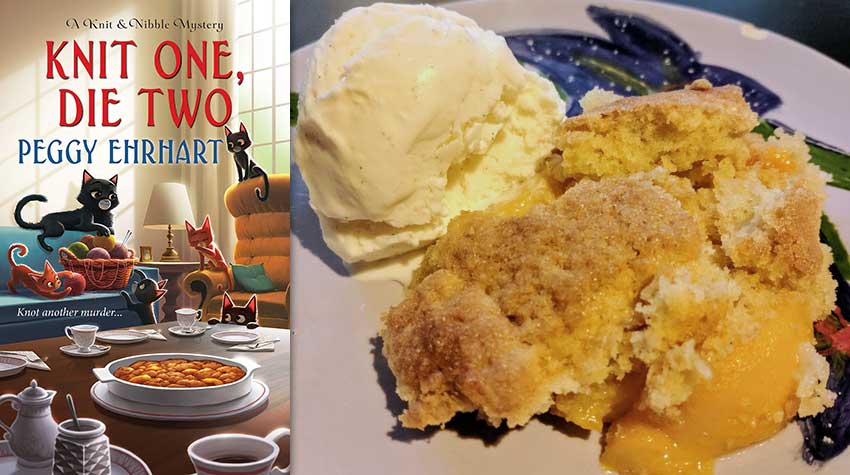 Pamela Paterson’s weekly Knit & Nibble group—a collection of knitters who gather in the home of one of their own to knit for two hours a week while enjoying a tasty snack—has a new if somewhat disruptive member. Caralee Lorimer is an actress who’s just moved back to the town of Arborville, New Jersey, after years spent living in Manhattan. She lives with her Aunt Margo now and works at the local diner while also lending her talents to the Arborville Players, who are currently in rehearsals for a stage production of A Tale of Two Cities. For her role as Madame Defarge, she’s joined Knit & Nibble in order to work on her knitting skills, which any aficionado of classic literature will know plays a large part in the proceedings of Dickens’s tale.

Her knitting will play a large part in this story too, as Caralee will soon be found dead under a fallen pile of once-precariously-stacked furniture before rehearsals one night. The police rule it an accident, but Pamela isn’t so sure. From a conversation she’d had earlier with Caralee, Pamela is inclined to think that someone wanted the actress seriously harmed—if not dead outright. When Pamela’s best friend’s husband discerns a pattern to the seemingly haphazard heap of knitting Caralee had been working on, Pamela soon finds herself investigating a long list of suspects with a motive for wanting to get rid of the younger woman.

I was pleasantly surprised to make the acquaintance of Pamela, who—as an introvert—is quite unlike the usual culinary cozy heroine. Generally content to stay in her shell and uncomfortable with prolonged casual social interaction, she’s not the kind of person to take on an investigation lightly—especially given the disapproval of some of her nearest and dearest. Fortunately, she has Bettina Fraser for a best friend. As a small-town reporter and decided extrovert, she’ll happily go where Pamela hesitates, and their partnership is a true delight.

Knit One, Die Two included a knitting pattern as well as the following recipe: 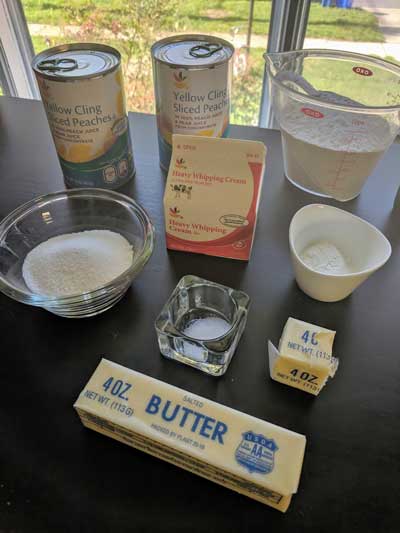 Butter your baking dish, fill it with the peaches, and sprinkle 1 tbs. of sugar over them. Use more sugar if you wish, but the cobbler dough is also sweet. Sprinkle on the rum or bourbon if you are using it. 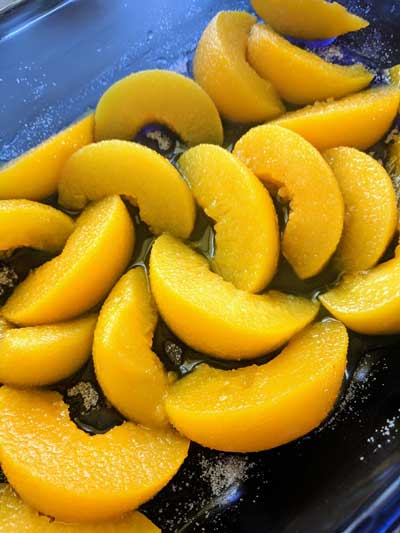 For the dough, sift together the flour, baking powder, and salt. Using a spoon, not a mixer, blend in ½ cup of the melted butter and 3 tbs. sugar. Add heavy cream, a bit at a time. You want a soft dough but you don’t want it to be runny.

Drop the dough in patches on top of the fruit using a spoon or your fingers. Pat it down to smooth it, but it’s not necessary to cover every spot and it’s okay for the dough to be thicker or thinner in places. Chill the cobbler in the refrigerator for at least half an hour. 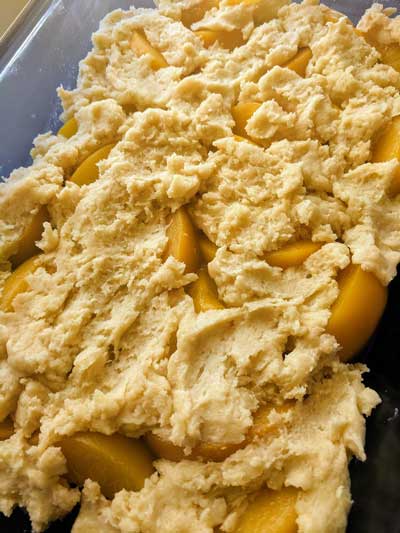 Heat the oven to 425 degrees. Take the cobbler from the refrigerator, brush the top with the remaining melted butter (you might need to remelt it) and sprinkle on the remaining 1 tbs. of sugar. Bake the cobbler for half an hour or more. You want the top to look puffy and be lightly browned. 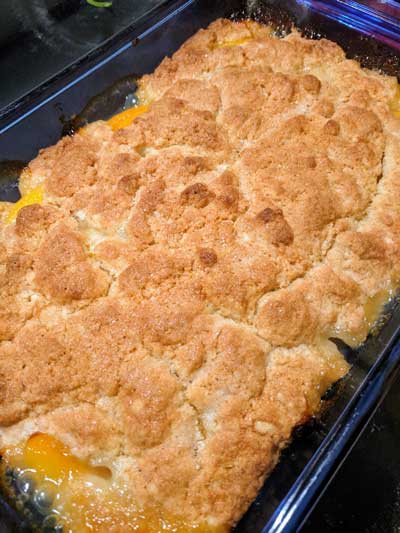 Serve it warm (but not hot) or at room temperature, with vanilla ice cream or heavy cream. 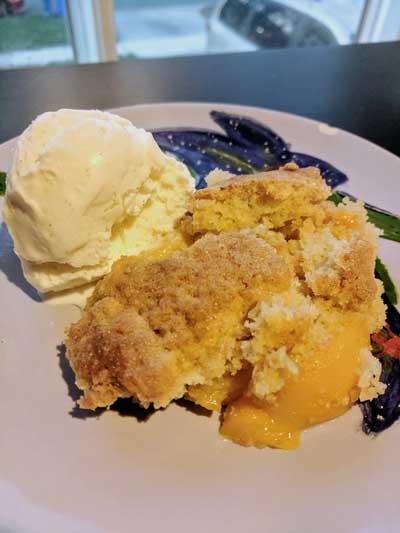 In her description, Peggy Ehrhart notes that this cobbler works fabulously with any kind of fruit. While peaches aren’t yet in season, I still had a hankering for them, so I decided to use canned. I thought two 15 oz. cans would be enough, but I should have erred on the side of having too much, as I could definitely have used more peach in this otherwise very satisfying recipe.

The pastry parts were excellent: not too sweet and with a perfect texture. The recipe itself was very easy to put together (my youngest even helped brush on the butter!), and the cobbler came out of the oven looking absolutely gorgeous. I’m definitely adding this one to the repertoire.

Next week, we travel even further south for the first in a series I’ve previously enjoyed reviewing for this column and try out a tempting appetizer. Do join me!