Cooking the Books: Knit of the Living Dead by Peggy Ehrhart

Halloween has come to Arborville, and Pamela Paterson’s main concern is whether she’s underdressed, as usual, for the town’s annual bonfire celebrations—especially in comparison with her friends Bettina and Nell, who have gone all out with their costumes. All thought of frivolity is swiftly pushed out of their heads, however, when two teenagers stumble across a freshly murdered corpse in the shadows beyond the bonfire glade. Nell recognizes the distinctive outfit on the murdered woman as the one her neighbor Mary Lyon had talked about wearing to the bonfire on her knitting blog. So she’s in for a surprise when the dead woman turns out to be someone else altogether.

While Nell is usually discouraging of Pamela and Bettina getting involved in murder investigations, she does feel that she ought to warn Mary that the other woman might have been killed in a case of mistaken identity. Her suspicions are confirmed when Mary admits to loaning the costume she’d planned to wear to her hairdresser, Dawn Filbert, at the last minute. Mary, however, is hard-pressed to believe that anyone would want to kill her and is convinced that someone must have had it in for Dawn.

Bettina, being both an ace reporter and no huge fan of the local police, is determined to get to the bottom of the case—with Pamela’s help, of course. But when more dead bodies show up, it becomes apparent that Dawn’s death was not enough to slake a calculating killer’s thirst for vengeance.

This sixth installment of the Knit & Nibble Mystery series finds our intrepid heroines getting involved in far many more turbulent Arborville relationships than they’d bargained for. The highlight of those—if such can be said for something that causes Pamela such grief—is the examination of what could have been between her and her handsome architect neighbor, Richard Larkin. It was also nice to see the usually straight-laced Nell join in on the sleuthing. The extra snippets of information from the articles Pamela reads as part of her job as associate editor of a fiber arts magazine were also enjoyable, particularly when they came to bear on the murder mystery itself.

As always, this book included a knitting pattern at the end, though we were treated to two recipes instead of the usual one this time! I opted for the slightly more complicated cake recipe over the unusual though intriguing chocolate-candy corn cookies: 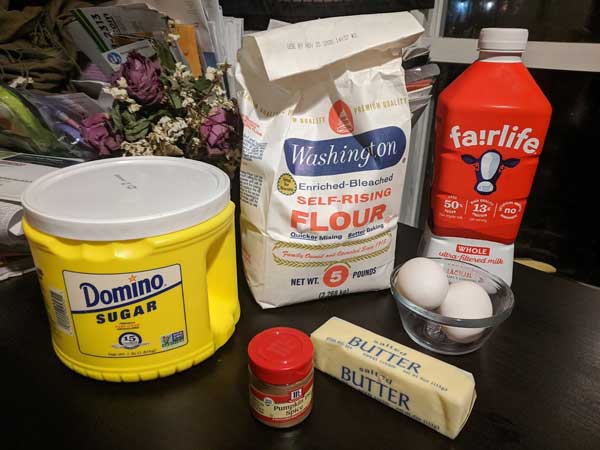 ½ cup butter (= one stick, and put it out to soften in advance)

2 eggs, separated into medium-size bowls (yolks in one, whites in the other)

Sift flour, sugar, baking powder, and salt into a large bowl. Cut in the butter with a pastry blender or two knives, or squish it in with your fingers, until the mixture resembles coarse sand. Set aside ½ cup of this crumb mixture for the topping.

Add the yolks and milk to the crumb mixture in the large bowl. Stir to moisten. Fold in the beaten egg whites. The batter may seem stiff and lumpy, but that’s okay.

Turn the batter into a greased or buttered square pan, 9”x9”x2”. 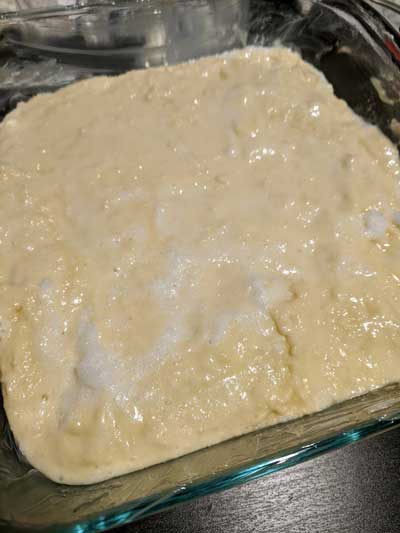 Blend the pumpkin spice into the ½ cup of the crumb mixture you set aside and use a small spoon to sprinkle the mixture evenly over the top of the batter. Pat down the crumb mixture with the back of the spoon.

Bake at 350 degrees for 30 to 35 minutes. Check for doneness by sticking a wooden toothpick into the middle of the cake. If the toothpick comes out clean, the cake is done. 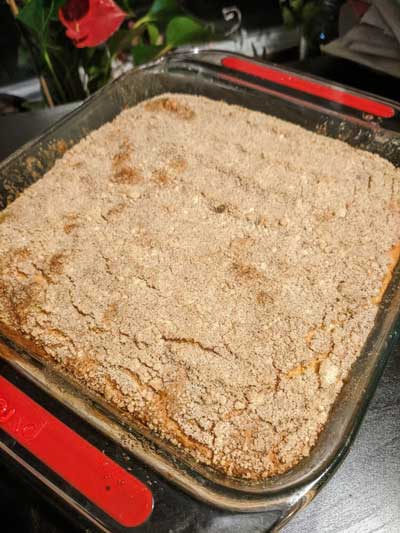 Let the crumb cake cool before cutting and serving. To serve, leave it in the baking pan, cut it into quarters, and lift out the quarters with a wide, flat spatula or a pancake turner. This recipe makes 8 not-too-big, not-too-small servings, but it’s easier to lift out quarters and then cut them into serving sizes. 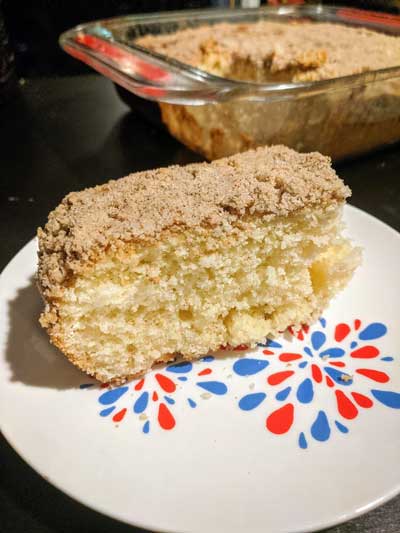 While this was, indeed, a delicious crumb cake, it didn’t taste much of pumpkin spice. I think that the next time I try this, I’ll probably add some of the pumpkin pie spice blend to the batter itself instead of just putting it in the crumb topping. If you like a milder cake, then this recipe is most likely perfect for you as is.

Next week, we head southwest to solve another murder mystery while continuing to indulge my seasonal craving for pumpkin baked goods. Do join me!

See also: Cooking the Books: The Corpse Who Knew Too Much by Debra Sennefelder