Fairy garden store owner Courtney Kelly is both pleased and a little nervous when local socialite Misty Dawn asks her to throw a birthday party for one of the latter’s sorority sisters. Courtney has thrown several fairy-themed parties for kids before but never one for adults. Misty assures her that guest of honor Odine Oates will love it, as will the rest of their guests, including glamorous film star Farrah Lawson.

Courtney is a little starstruck on meeting Farrah, who is both lovelier and more gracious than Courtney expected. But not everyone has the same opinion of the seemingly universally adored Hollywood celebrity. When the actress is found dead from a deliberate poisoning in her rental home shortly before the birthday party, Courtney isn’t the only person to become all too uncomfortably aware that someone actually hated Farrah enough to kill her.

Courtney’s incorrigible curiosity soon has her wondering who could have been driven to murder Farrah and why, even as the local police warn her to back off from looking into the issue. With Misty and Odine intent on continuing with the festivities, however, Courtney can’t help but overhear things that might be relevant to Detective Dylan Summers’s case. But Farrah’s death isn’t the only crime plaguing their ordinarily quiet town of Carmel-by-the-Sea. A petty thief keeps brazenly snatching things from the shops, and the latest manuscript by a renowned local author has gone missing from her home. Perhaps the most personal mystery for Courtney is the sudden appearance of fairy doors all over town. Will she be able to get to the bottom of all these conundrums without imperiling either herself or her beloved fairy Fiona?

This third installment of the Fairy Garden Mystery series is a charming continuation of Courtney’s adventures, with the added bonuses of a guest appearance from her shady ex-fiancé as well as a heartwarming development in her relationship with the handsome local restaurateur she’s recently started seeing. The light paranormal aspects of this fairy-themed mystery are also delightful, though it did feel like Courtney is starting to rely a little too much on Fiona and her fairy cohort to get witnesses and suspects to talk. Regardless, this was an effortlessly captivating read for anyone who likes a bit of magic with their culinary cozy reads.

And this wouldn’t be a culinary cozy without recipes! There were 14 included, with several gluten-free variations, and I absolutely had to try this one: In a food processor, mix the flour, baking powder, salt, and butter until the mixture is like small peas; about 10 pulses. Add the sugar and pulse again. Add the preserves, eggs, and milk. Pulse about 5-6 times. The mixture will be soft and sticky.

Pour the batter into the loaf pan and bake for 40-45 minutes, or until a toothpick comes out clean.

Cool in the pan at least 20 minutes. Turn out and let cool longer. When ready, warm the preserves in the microwave for a couple of seconds so they’re easy to spread, and spread on top of the tea cake. Dust with powdered sugar. 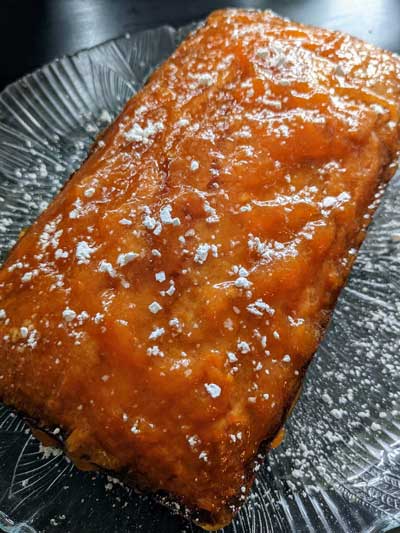 Note to the baker: this is a sticky cake, and you will need to clean your fingers often when eating or serving. 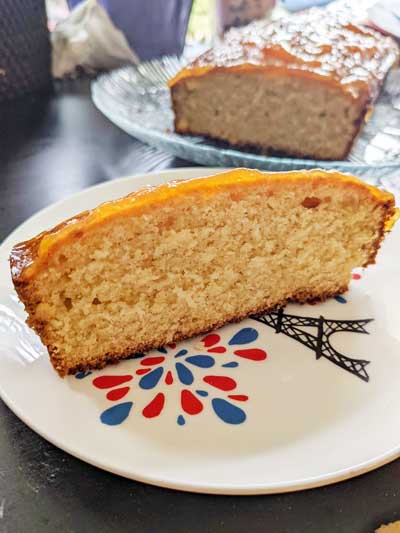 I was genuinely shocked by how easy this was to make—just dump everything in the food processor in stages, then stick it in the oven, brushing the glaze over after it cools. My youngest very much enjoyed helping me with this as well as helping me eat it later on! The cake itself was perfection, like a lighter pound cake with just a hint of tartness from the apricot. As the name suggests, it’s a perfect cake to serve with tea, though I actually found it a lot less messy than implied by the recipe. I’ll definitely be baking this again soon!

Next week, we head to the East Coast to make a delicious breakfast treat that both humans and dogs can enjoy while investigating the appearance of a mysterious corpse. Do join me!