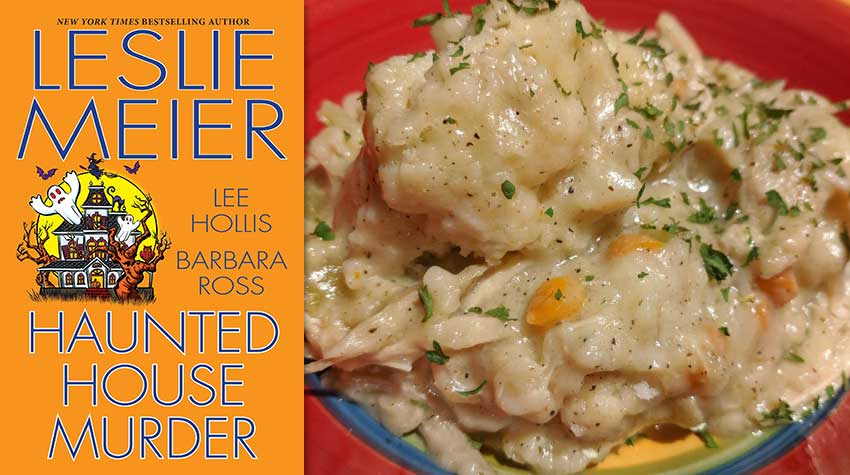 This was my first of the seasonally themed collections these three talented writers have been putting together for a while, and I’m so glad I finally got around to reading it. Barbara Ross is my favorite culinary cozy author, so it’s a bit ridiculous that I’ve barely even glanced at this series before this. I must admit, though, to preferring full-length mystery novels to novellas. My prior experience with mystery novellas has led me to feel them merely abbreviated versions of whole novels—fortunately, this collection has remedied that misconception.

And just in time for Halloween too! Of the three novellas presented here, I was, of course, most taken with Ms. Ross’s Hallowed Out. The heroine of her Maine Clambake Mystery series, Julia Snowden, agrees to participate in a Haunted House tour to get a pushy promoter off her mother’s case. For a week, she will help re-enact a Prohibition-era gangland murder at her restaurant, though she has serious doubts as to the veracity of the allegedly historical proceedings. When the guest actor brought in to play the unfortunate victim is himself shot to death on their very first night, Julia must help find a killer or risk becoming the next victim herself.

It was really great to spend more time with Julia and her friends and family. The mystery was clever, as always, and the bit with the moving carpet added a spooky touch to the narrative. I also greatly enjoyed the Stranger Things homage.

The second novella in this collection, Lee Hollis’s Death by Haunted House, also referenced other popular Halloween media, though it went for a more retro feel. Set far before Hayley Powell had even thought of getting herself mixed up in detecting—so prepare for a lot of her ex-husband, Danny, being both still on the scene and absolutely awful—this novella details her life with her pre-teen kids as a creepy family moves in next door. Danny and the kids are getting a little too into the holiday season, suspecting their new neighbors of spookiness and worse, but when Hayley stumbles across an actual dead body in the woods behind their house, it looks like there may be something to her family’s suspicions after all.

I’m a big fan of the Hayley Powell Food and Cocktails Mystery series, so this was fun to read, especially since it gave us more background on her previous married life to the wildly immature Danny. It was also really nice to see her food-columnist predecessor, Hattie Jenkins, still alive and kicking, writing her own acerbic column. I actually chose to try out one of Hattie’s recipes below, but more on that after I discuss the other novella collected here.

Leslie Meier’s Haunted House Murder doesn’t actually feature a murder but does involve a missing child and suspicion of foul play. When reporter Lucy Stone’s grandson, Patrick, comes to stay for two months, Lucy is overjoyed. But she soon remembers how draining it is to be a full-time parent, especially with the general unhelpfulness of her husband and the outright brattiness of some of her grown children. Juggling child-rearing with her part-time job as well as her civic obligations means she shouldn’t have time to worry about the unfriendly couple who moved into the dilapidated house across the street from Patrick’s school. But the more she sees of them, the more she worries that something terrible is about to happen.

I really enjoyed getting to know Lucy as well as the way in which the novella treated the weighty subject of domestic violence. Since this was my first taste of the Lucy Stone mystery series, however, I was quite shocked with the behavior she puts up with from some of her nearest and dearest. I’m rather hoping she’ll put them in their places in future installments, as I’m definitely looking forward to reading more!

There were four recipes included, and since we’d made an appetizer last week, I decided to try out this one, which coincidentally was perfect for using up some leftover rotisserie chicken as well as some wilting bits of celery and carrot I had in the fridge: 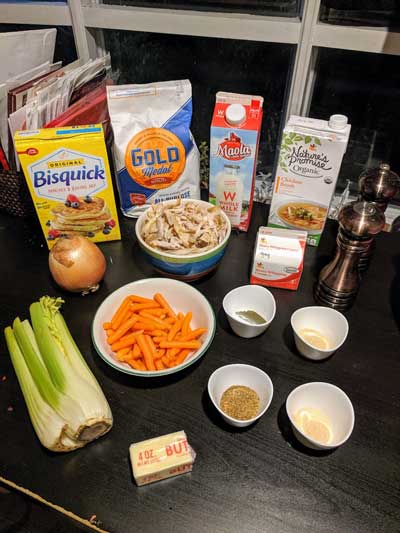 salt and pepper, to taste

In a large pot on medium/low heat melt your butter. Add the diced onions, carrots, and celery. Season with the salt and pepper. Cook for about 10 minutes or until the veggies soften and begin to turn brown.

Turn your heat up to medium/high and bring to a boil.

In a separate mixing bowl mix your Bisquick and milk together. 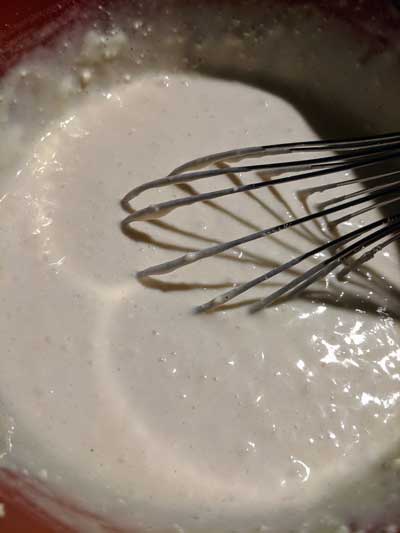 Using a tablespoon, scoop generous spoonfuls of the dough and add to the boiling pot until all the dough is gone.

Lower the heat to a gentle simmer and cover pot for 20 minutes. After 20 minutes remove the lid and flip the dumplings and continue cooking for ten more minutes.

Remove from heat and let rest for 5 minutes before ladling scoops of chicken and dumplings into bowls. Serve with salt and pepper to taste. 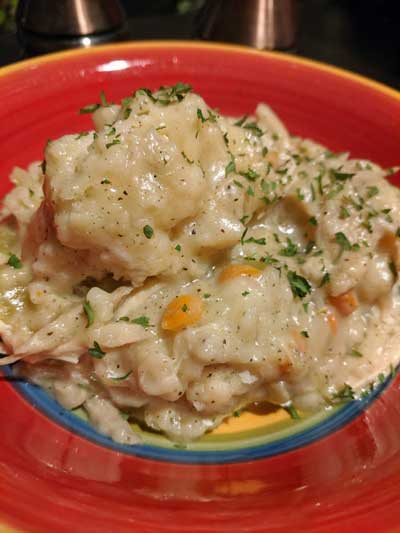 This was very easy to make, though I’m not sure I did the dumplings correctly. They didn’t seem to hold together very well, but taken altogether with the stew, they made for a deliciously hearty dish. I did wind up adding cooked peas to the leftovers, however, because I think that brought even more flavor and brightness to this dish, and I would definitely consider tossing some in the next time I make this recipe.

Next week, we travel south to bake a tasty sweet and salty side dish while investigating murder. Do join me!

See also: Cooking the Books: Word to the Wise by Jenn McKinlay