I usually find mystery novellas to be fairly hit or miss, but I have very much enjoyed the holiday-themed collections Kensington puts out showcasing some of their finest cozy authors. This latest collection is frankly one of their best yet!

Revolving around a murder at a Halloween party, each story here has the meat of an entire book. While you don’t have to have read each of the series referenced to enjoy these tales, the novellas do serve as a great introduction to all three of these authors’ marvelously entertaining Maine-set cozy series. Established fans of Leslie Meier, Lee Hollis, and/or Barbara Ross—and especially fans like myself, who love all of them!—will absolutely not want to miss this collection either. The novellas add greater depth and texture to the carefully crafted series universes and are also a great way to tide over fans waiting for the next full-length novels.

The first story gives the collection its title. Journalist Lucy Stone is still feeling bad about how she misjudged new Tinker’s Cove residents Ty and Heather Moon and is eager to atone by helping them integrate into the community. When they offer up their Victorian home as well as their skills with visual effects and sound in order to set up a haunted house to raise funds for charity, Lucy jumps at the chance. With a committee comprised of both newer and more established residents, it looks like the haunted house will not only raise a healthy bundle for the Hats and Mittens Fund but also cement the Moons’ status in town. But then, Lucy finds Heather unconscious in the bathroom, the seeming victim of a drug overdose, and Ty is charged with negligent homicide. Lucy is swiftly drawn in to help uncover the truth about a young couple she was only beginning to know.

In keeping with the naming traditions of Lee Hollis’s terrific Hayley Powell Food and Cocktails series, the second story is titled Death of a Halloween Party Monster. Hayley has successfully pivoted from newspaper office manager to restaurateur and has decided to throw a Halloween party to celebrate. The holiday has always been a big tradition for her family, but even she’s surprised by how her guest list for intimates has expanded, primarily due to her best friend Mona begging her to invite random people for the benefit of Mona’s large brood of children. One of these is high school music teacher Boris Candy. He’s living up to the spirit of the season by wearing a frighteningly realistic Pennywise costume that he’s using to scare some of the other attendees. But someone definitely doesn’t like clowns, and when Boris is found dead in the walk-in, Hayley will have to determine which of her party-goers is a murderer.

The final story is from my favorite cozy author, Barbara Ross, who provides us with another excellent installment of her Maine Clambake Mystery series. When Julia Snowden gets a tearful phone call from her 13-year-old niece, begging to be rescued from a sleepover gone bad, Julia immediately goes to pick up poor Page. She’s surprised to find police cars around the Davies house where Page and her two friends had been staying; apparently, the sleepover had morphed into a raging high school party once word got out that the three middle-schoolers were parent-free for the evening. Even worse, the kids hadn’t cleared out because of the cops. They’d fled because a ghostly Mrs. Zelisko, the third-floor tenant, had flown through the living room, frightening the daylights out of the kids. When Mrs. Zelisko’s corpse is found in the backyard afterward, Julia gets involved in figuring out who killed her and why.

Each of these novellas is an extremely solid story that I thoroughly enjoyed, all in one bargain package! I cannot urge you enough to get your own copy, especially if you’re a fan of any of these authors. Aside from the Maine setting, each novella shares a quiet wit and a healthy propensity for self-awareness, as when Lucy worries about no longer being part of the cool crowd or when Julia faces the loneliness of her first winter without her boyfriend. In addition, there are seven tasty food and drink recipes included! I decided to try out this party treat, from Death of a Halloween Party Monster: 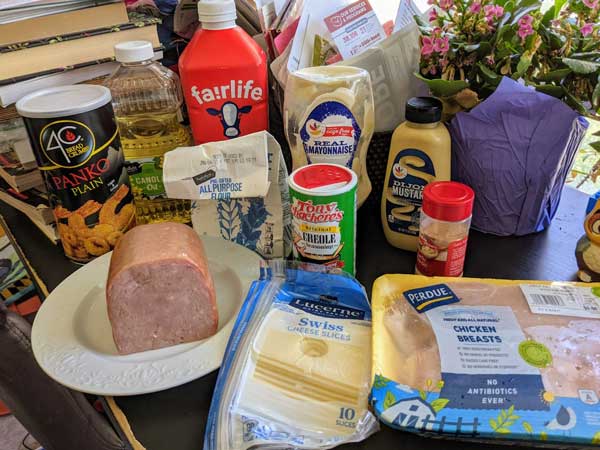 Mix the two ingredients for the dipping sauce in a small bowl, and set aside.

Pound the chicken breasts with a kitchen mallet to equal thickness. 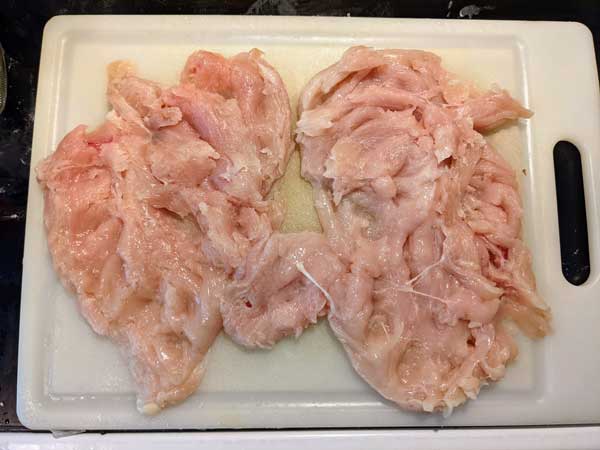 Heat the oil to medium heat.

Add the flour, Cajun seasoning, and garlic to a 1-quart ziplock bag.

Cut the chicken into bite-size pieces. One by one, dip the chicken bites into the milk, then into the flour mixture. Shake off excess flour and dip back into the milk, then roll the bite around in the panko bread crumbs, making sure it is fully coated. Add the coated chicken to the heated oil, and cook until golden brown and cooked through (7-10 minutes), turning as needed. Remove from oil and place on a cooling rack placed on a baking pan. 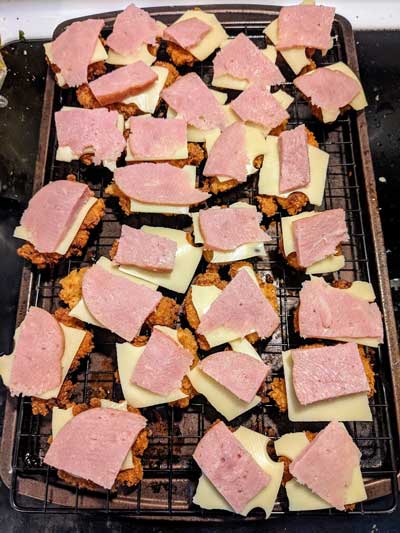 When ready to serve, you can warm for a bit in the oven or even for a few seconds in the microwave, just long enough to melt the cheese. Put out the bowl with the dipping sauce, and you are in business! 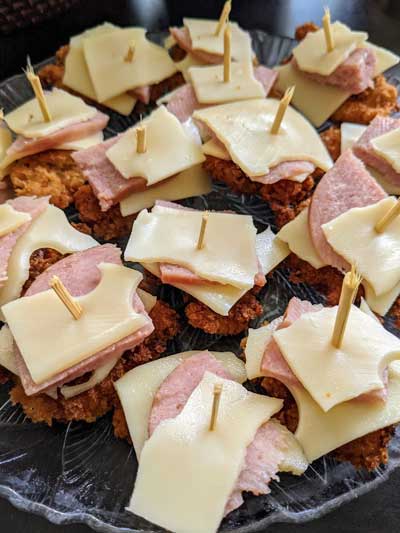 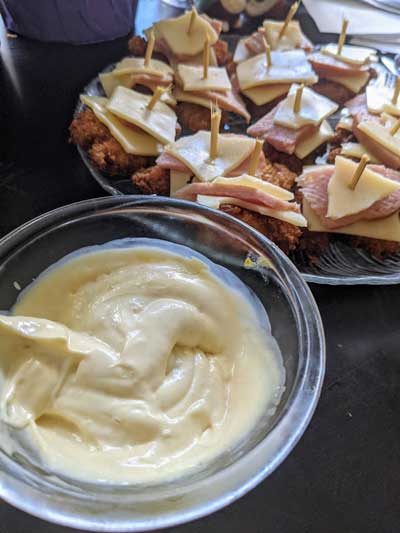 One of my favorite things about Lee Hollis’s recipes is how they demystify complicated foods by providing easy-to-follow instructions, giving me the tools I need to make what I’ve always feared were too daunting for my skills. I would never have dreamed of making chicken cordon bleu before this recipe but found this to be very much a doable dish.

Granted, this isn’t a traditional chicken cordon bleu but has been adapted for party purposes in the most delicious way possible, in my humble opinion. I was actually impressed by how two chicken breasts could be stretched this way into 28 little servings—or more if you’re not as heavy-handed as I am when it comes to portioning. The flouring blend on the chicken made these come out tasting like the perfect chicken nuggets, and the ham (or turkey ham, as I used) and cheese combo on top was just the perfect touch. This is the perfect rather fancy but not too complicated dish to whip out at your next party!

Next week, we head a few states south to try out some delicious soup while investigating the death of a shady lawyer. Do join me!